A Great and Terrible Day 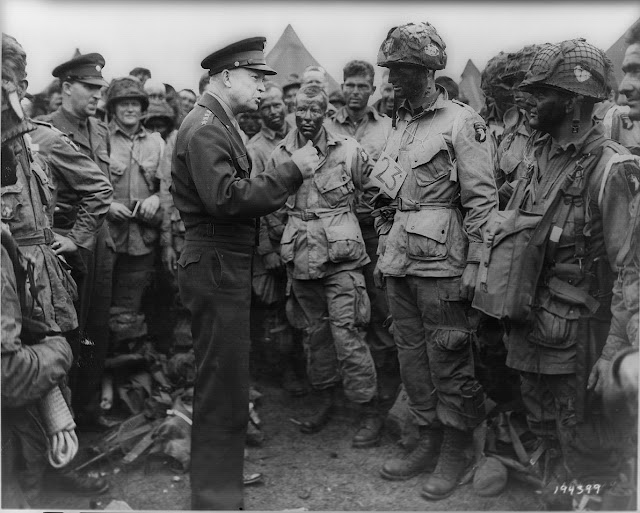 "Gen. Dwight D. Eisenhower gives the order of the Day. 'Full victory-nothing else' to paratroopers in England, just before they board their airplanes to participate in the first assault in the invasion of the continent of Europe." Eisenhower is meeting with US Co. E, 502nd Parachute Infantry Regiment (Strike), photo taken at Greenham Common Airfield in England about 8:30 p.m. on June 5, 1944.

“Good Luck! And let us all beseech the blessings of Almighty God upon this great and noble undertaking.”

Four days after Pearl Harbor, Hitler committed one of the most monumental blunders in history. Rushing back to Berlin from his Prussian headquarters on December 11, he went before the Reichstag and, in a short 334-word speech, declared war on the United States. In this single act of suicidal hubris he sealed the fate of the Third Reich.

Despite still being locked in a brutal war against Great Britain and the Soviet Union, when presented with the opportunity to declare war against a nation capable of producing as many munitions in one year as Germany could in five, Hitler did not hesitate or flinch. Hitler was certainly aware of America’s production potential, for he had written about it in Mein Kampf. Despite this knowledge, he remained unimpressed with American military potential. In 1940, he had told Soviet foreign minister Vyacheslav Molotov that the United States would not be a threat to Germany for decades — “1970 or 1980 at the earliest.” This was a colossal misjudgment, but not Hitler’s only one. Not unlike other dictators, Hitler believed it was impossible to transform pampered American youths into formidable soldiers.
Only two a half years after Hitler’s war declaration, a mighty American army was poised to cross the English Channel and bring Hitler’s “Thousand Year Reich” to an end 988 years ahead of schedule. At Gen. Dwight Eisenhower’s disposal was a superbly trained American and British army he believed capable of fulfilling Gen. George Marshall’s order to “reenter the continent of Europe and defeat the Nazi enemy.”

To accomplish this task, American industry, which an earlier German general had called the “pitiless beast,” had provided everything American and British forces required. On June 5, 1944, a vast armada of more than 5,000 vessels carried some 150,000 troops and 30,000 vehicles across the English Channel and onto the Normandy beaches. In the air, 800 aircraft, launching from nine British airfields, deposited more than 12,500 paratroopers onto flooded fields and towns behind the Normandy beaches.

Soon after, another 300 aircraft struck directly at the beaches themselves, dropping more than 13,000 bombs. Unfortunately, these bombers released their loads seconds late, killing a number of hapless cows but doing no damage to the German fortifications awaiting the Allied landings. These bombers, however, represented only a small fraction of the air armada that had been pounding German cities, industry, and transport centers for over two years. In just the two months prior to the invasion, the Allies flew 14,000 missions in support of D-Day operations, losing 12,000 airmen and 2,000 aircraft in the process. They lost another 127 planes on D-Day, and by the end of the Normandy campaign 28,000 airmen were dead.

Less than a week after the invasion, all five of the Normandy invasion beaches — Utah, Omaha, Gold Sword, and Juno — were secure. Within the beachheads were 340,000 troops — about the same as the population of Tampa or New Orleans — more than 50,000 vehicles and some 100,000 tons of supplies. But that was only the beginning of a massive military machine that landed tens of thousands troops and 20,000 tons of supplies every day. America’s “pitiless” industrial might, once turned towards war, had transformed a military that barely ranked in the global top 20 in 1940 into a mortal threat to Hitler’s Germany. Moreover, it had done so 25 years earlier than Hitler thought possible.
Everything industry produced, however, was useless unless it was wielded by intrepid soldiers, competently led. And it was in this regard that Hitler made his grossest miscalculation. The so-called pampered soldiers of democracy proved to be more than a match for the tyrannical armies of Nazi Germany and Japan (often forgotten is that as the Americans were crossing the English Channel another invasion force was leaving Pearl Harbor, heading for the Japanese-held island of Saipan).

I have had several opportunities to tour the Normandy beaches, and have always walked away awestruck. Standing at the 150-foot summit of Pointe du Hoc, one can only wonder at the bravery of the American Rangers who scaled that sheer under intense and constant German fire. I still find it unfathomable that unprotected infantrymen ran, stumbled, and crawled across 1,000 yards of open sand at Omaha Beach that was being swept by dozens of German machineguns, each firing over a 1,000 rounds a minute.

Only the fact that the courageous soldiers of the 1st and 29th Infantry divisions did somehow actually cross that deadly beach makes it possible to believe such a thing was doable. Still, it was a near-run thing. The first wave to hit the beach was nearly annihilated. The official report of one company in the 29th Division captures the action, if not the mind-numbing hell the soldiers experienced:


As the first men jumped, they crumpled and flopped into the water. Then order was lost. It seemed to the men that the only way to get ashore was to dive head first in and swim clear of the fire that was striking the boats. But, as they hit the water, their heavy equipment dragged them down and soon they were struggling to keep afloat. Some were hit in the water and wounded. Some drowned then and there . . . But some moved safely through the bullet fire to the sand and, finding they could not hold there, went back in to the water and used it as cover, only their heads sticking out. Those who survived kept moving with the tide, sheltering at times behind underwater obstacles and in this way they finally made their landings.

Within ten minutes of the ramps being lowered, Company A had become inert, leaderless and almost incapable of action. Every officer and Sergeant had been killed or wounded . . . It had become a struggle for survival and rescue. The men in the water pushed wounded men ashore, and those who had reached the sands crawled back into the water pulling others to land to save them from drowning, in many cases only to see the rescued men wounded again or to be hit themselves. Within twenty minutes of striking the beach Company A had ceased to be an assault company and had become a forlorn little rescue party bent upon survival and the saving of lives.

The next wave was similarly destroyed. At the moment of crisis, Gen. Omar Bradley contemplated abandoning Omaha Beach and inserting the following waves on Utah or the British beaches. But then word arrived that small packets of men were crossing the beach and climbing the bluffs beyond. Bradley kept his nerve and fresh troops continued piling onto the beach.

With many of the junior leaders killed and wounded in the first minutes of the fighting, senior leaders filled the gaps. Col. George Taylor and Gen. Norman “Dutch” Cota became platoon leaders. As Taylor walked along the beach encouraging soldiers to stand and move forward, he uttered the famous phrase: “There are two kinds of soldiers on this beach. Those who are dead and those who are about to die. So let’s get the hell off the damned beach!”
Dutch Cota, whom witnesses called utterly fearless, strode the beach chomping on a cigar, seemingly unconcerned by the machinegun rounds striking all around him. Finding a Ranger battalion commander, he told him that he expected “the Rangers to lead the way,” a phrase that remains the Rangers’ motto to this day. As Cota walked off, the Rangers started moving. Cota continued along the beach, encouraging, cajoling, and pleading with small packets of men to move forward, often telling them “They might as well die inland as on this godforsaken beach.” In the end, it was left to Cota himself to grab a rifle and rush through a gap in the barbed wire, yelling: “Follow me.” Seeing his example, nearby men mustered their courage, picked themselves up, and followed.

In this way, the Americans got off the beach and pierced Hitler’s Atlantic wall.

On Utah Beach, the 4th Infantry Division did not run into the meat grinder their brothers faced on Omaha. But the first waves had landed over two kilometers from where they had planned. Gen. Theodore Roosevelt Jr. simply informed his subordinate commanders, “We will start the war from here.”

By nightfall, more than 9,000 Allied soldiers were dead or wounded, but more than 100,000 had made it ashore. Eight American divisions were moving inland to face 55 German divisions already in France. Over the next few weeks, the Allies would fight off fierce German counterattacks, and it was not until late July that the Americans broke free of the Norman bocage and began their race across France. Much hard fighting lay ahead, but ultimate success was assured by the courage and sacrifice of the men who stormed the Normandy beaches 67 years ago today.

If ever you find yourself in France, please try to visit the American cemetery at Colleville-sur-Mer. There you will find the beautifully maintained graves of 9,386 Americans, all of them facing west, toward America. There lie those of the greatest generation who made the ultimate sacrifice. Few places offer a better setting for contemplating the cost of freedom. But it is just as incredible to ponder the fact that America could then and can now produce the men and women to face such a challenge.

— Jim Lacey is the professor of strategic studies at the Marine Corps War College. He is the author of Keep From All Thoughtful Men: How U.S. Economists Won World War II.