It's all bumps, no road in Obamaville 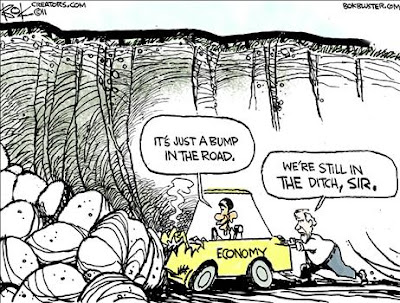 ‘There are always going to be bumps on the road to recovery,’’ President Obama said at a Jeep plant in Toledo the other day. “We’re going to pass through some rough terrain that even a Wrangler would have a tough time with.’’ His audience booed. They’re un-fire-able union members with lavish benefits, and even they weary of the glib lines from his twelve-year-old speechwriters.

We’re not on the road to recovery. You can’t get there from here, as they say. Obama was in Toledo to “celebrate” the sale of the government’s remaining stake in Chrysler to Fiat. That’s “Fiat” as in the Italian car manufacturer rather than “an authoritative or arbitrary decree (from the Latin ‘let it be done’),” which would be almost too perfect a name for an Obamafied automobile. The Treasury crowed that Fiat had agreed to pay a whopping $560 million for the government’s Chrysler shares.

Wow! 560 million smackeroos! If you laid them out end to end, they’re equivalent to what the federal government borrows every three hours. That’s some windfall! In the time it takes to fly Obama to Toledo to boast about it, he’d already blown through the Italians’ check. But who knows? If every business in the U.S. were to be nationalized and sold to foreigners to cover another three hours’ worth of debt, this summer’s “Recovery Summer” would be going even more gangbusters. I’d ask one of Obama’s egghead economists to explain it to you simpletons, but unfortunately they’ve all resigned and returned to cozy sinecures in academia. The latest is chief economic adviser Austan Goolsbee, the genius who in 2007, just before the subprime hit the fan, wrote in the New York Times that this exciting new form of home “ownership” was an “innovation” that had “opened doors to the excluded” and was part of an “incredible flowering of new types of home loans.”

Where have all the flowers gone? Not to worry. By now, some organization of which you’re a member has already booked Professor Goolsbee to give an after-dinner speech at your annual meeting where you’ll be privileged to get a glimpse of his boundless expertise for a mere six-figure speaking fee.

“I’m not concerned about a double-dip recession,” Obama said last week. Nor would I be if I had government housing, a car and driver, and a social secretary for the missus. But I wonder if it’s such a smart idea to let one’s breezy insouciance out of the bag when you’re giving a press conference. In May the U.S. economy added just 54,000 jobs. For the purposes of comparison, that same month over 100,000 new immigrants arrived in America.

So what kind of jobs were those 54,000? Economics professorships at the University of Berkeley? Non-executive directorships at Goldman Sachs? That sort of thing? No, according to an analysis by Morgan Stanley, half the new jobs created were at McDonald’s. That’s amazing. Not the Mickey D supersized hiring spree, but the fact that there’s fellows at Morgan Stanley making a bazillion dollars a year analyzing fluctuations in minimal-skill fast-food service-job hiring trends. What a great country! For as long as it lasts. Which is probably until some new regulatory agency starts enforcing Michelle Obama’s dietary admonitions.

Until then, relax. That bump in the road is just a quarter-pounder with cheese that fell off the counter on the drive-thru lane to recovery. Like every other blessing, we owe the Big MacConomy to the wisdom of Good King Barack. “This plant indirectly supports hundreds of other jobs right here in Toledo,” Obama told the workers at Chrysler. “After all, without you, who’d eat at Chet’s or Inky’s or Rudy’s? . . . Manufacturers from Michigan to Massachusetts are looking for new engineers to build advanced batteries for American-made electric cars. And obviously, Chet’s and Inky’s and Zinger’s, they’ll all have your business for some time to come.”

A couple of days later, Chet’s announced it was closing after nine decades. “It was the economy and the smoking ban that hurt us more than anything,” said the owner. But maybe he can retrain and re-open it as a community-organizer grantwriting-application center. The Bureau of Labor Statistics reports that the median period of unemployment is now nine months — the longest it’s been since they’ve been tracking the numbers. Long-term unemployment is worse than in the Depression. Life goes slowly waiting for a fast-food job to open up.

This is Main Street, Obamaville: All bumps, no road. But shimmering on the distant horizon, beyond the shuttered diner and the foreclosed homes, is a state-of-the-art electric car, the new Fiat Mirage, that should be wheeling into town in a half-decade or so provided it can find somewhere to charge. “We will be able to look back and tell our children,” declared King Barack the Modest of his own candidacy in 2008, “this was the moment when the rise of the oceans began to slow.” Great news for the oceans! Meanwhile, back on dry land, a quarter of American mortgages are “underwater” — that’s to say, the home “owners” owe more than the joint is worth. In Harry Reid’s Nevada, it’s 63 percent. Perhaps Obama’s Aquatic Bodies Water-Level Regulatory Authority, no doubt headed by Jamie Gorelick or Franklin Raines or some other Democrat worthy, could have its jurisdiction extended to the Nevada desert.

“Hope”? “Change”? These are the good times. What “change” are you “hoping” for in Obama’s second term? The loss of America’s triple-A credit-rating? The end of the dollar as global currency? Or just a slight upward tick in the same-old-same-old multi-trillion dollar binge-spending?

Random example from the headlines: The paramilitarization of the education bureaucracy. The federal Department of Education doesn’t employ a single teacher but it does have a SWAT team: They kicked down a front door in Stockton, Calif. last week and handcuffed Kenneth Wright (erroneously) in connection with a student-loan “investigation.” “We can confirm that we executed a search warrant,” said Department of Education spokesperson Gina Burress.

The Department of Education issues search warrants? Who knew? The Brokest Nation in History is the only country in the developed world whose education secretary has his own Delta Force. And, in a land with over a trillion dollars in college debt, I’ll bet it’s got no plans to downsize.

Nor has the TSA. A 24-year-old woman has been awarded compensation of $2,350 after TSA agents exposed her breasts to all and sundry at the Corpus Christi Airport security line and provided Weineresque play-by-play commentary. “We regret that the passenger had an unpleasant experience,” said a TSA spokesgroper, also very Weinerly. But hey, those are a couple of cute bumps on the road, lady!

The American Dream, 2011: You pay four bucks a gallon to commute between your McJob and your underwater housing to prop up a spendaholic, grabafeelic, paramilitarized bureaucracy-without-end bankrupting your future at the rate of a fifth of a billion dollars every hour.

In a sane world, Americans would be outraged at the government waste that confronts them everywhere you turn: The abolition of the federal Education Department and the TSA is the very least they should be demanding. Instead, our elites worry about sea levels.

The oceans will do just fine. It’s America that’s drowning.
Posted by jtf at 5:53 AM