No president “runs” the U.S. economy, but this president talks like he does. 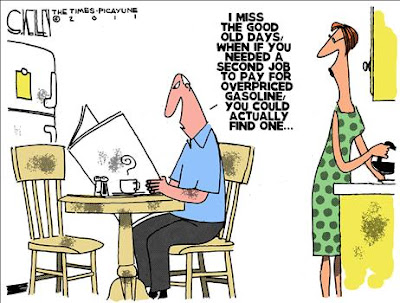 ‘Now, my administration has a job to do as well, and that job is to get this economy back on its feet,” President Obama declared on July 14, 2009, in Warren, Mich. “That’s my job, and it’s a job I gladly accept. I love these folks who helped get us in this mess and then suddenly say, well, this is Obama’s economy. That’s fine. Give it to me.”

The unemployment rate then was 9.5 percent. It’s now 9.1 percent, well above the 8 percent cap that the administration’s advisers projected under the stimulus bill. But that’s not the amazing part. According to a White House report written by economic advisers Jared Bernstein and Christina Romer in January 2009 in support of the bill, if we had passed no stimulus package at all, the unemployment rate would have topped out at around 8.8 percent in the last quarter of 2010.

Instead, we got Obama’s vital “investments.” Since his speech in Warren, we’ve spent another $2.8 trillion in borrowed money. Presumably, we could have cut the unemployment rate by four-tenths of a percentage point more cheaply than that?

Meanwhile, we’ve accrued a total of $3.7 trillion in debt on Obama’s watch, while losing 2.8 million jobs. That doesn’t sound ideal either.

But what do I know?

The more salient point is that Obama acts like he knows everything. From Day One, this White House has been cocksure about how to get us out of the economic ditch. In every major relevant speech, Obama has stuck with a consistent message: We know what to do and the Republicans don’t. “I will not sacrifice the core investments we need to grow and create jobs,” Obama insisted yet again in his April budget speech.

So what does this guy have to do to get the blame for the bad economy? Mark Halperin, an analyst for MSNBC and Time magazine, was asked on the Today show over the weekend about the political impact of the bad economy. He assured viewers that the president was totally engaged in the need for job creation. “The Republicans, though, have the onus on them to come forward with some ideas. The president’s ideas are still a little bit up in the air.”

A little bit up in the air? They’re in concrete. From his April 14, 2009, “New Foundation” speech at Georgetown University to his latest campaign stop, Obama has insisted he knows exactly what he’s doing. He stands by “Obamacare” as a boon for the economy. He still sees the “green revolution” — and all the crony capitalism that comes with it — as the solution to our woes. (That’s why he nominated John Bryson, a former utility CEO, subsidy-seeking entrepreneur, and environmental activist, to be his next commerce secretary.)

But is there any evidence it’s helped create jobs? Consider that when President Reagan oversaw a huge jobs boom, the media recycled the untrue claim that these were all low-paying “hamburger flipper” jobs.

Well, McDonald’s alone may be responsible for a quarter to a half of the new jobs created in the last month. And that hiring probably wouldn’t have happened if Mickey D’s hadn’t been given a waiver from Obamacare.

And then there’s the stimulus, which the White House still touts as an unqualified success. Well, during Obama’s first year in office, more than half (119,000) of all the new jobs in the United States were created in business-friendly Texas, according to the Bureau of Labor Statistics. If Obama created those jobs, why’d he put so many of them in, of all places, George W. Bush’s home state?

No president “runs” the U.S. economy, but this president talks like he does more than any I can remember. And yet, none of his economic promises or predictions has panned out. (Remember the long, hot “recovery summer” when 250,000 to 500,000 new jobs a month that the vice president promised turned out to be mirages?)

How does the media react? Not by taking him at his word when he says he wants it to be “Obama’s economy.” Instead, they’re ferociously truth-squadding Sarah Palin’s comments on Paul Revere and following her bus around like they’re in a remake of It’s a Mad, Mad, Mad, Mad World.

And maybe it is.

— Jonah Goldberg is editor-at-large of National Review Online and a visiting fellow at the American Enterprise Institute. You can write to him by e-mail at JonahsColumn@aol.com, or via Twitter @JonahNRO. © 2011 Tribune Media Services, Inc.
Posted by jtf at 9:13 AM