Yet another pull-no-punches tract from the Right’s Queen of Mean. (Also read Andrew Klavan: Now I Am Happy.)
Liberals eager to find offense with Ann Coulter’s latest book need only thumb over to page 4, where the blond provocateur lumps left-wing protestors in with the Maoist gangs looting villages and impaling babies in China. 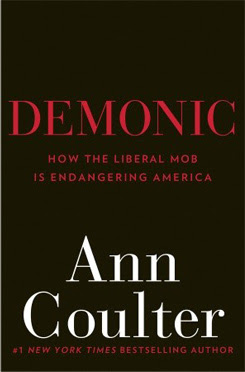 Or they can simply read the title.

Demonic: How the Liberal Mob Is Endangering America is yet another pull-no-punches tract from the Right’s Queen of Mean.

She’s as divisive as ever, lobbing red meat to her base while driving the Left to fits of rage. It’s in her DNA. But her tabloid style distracts from a larger truth. Few can illuminate the chasm between Right and Left like Coulter. You just have to endure her baiting prose to see it.

Demonic feels as packed as her political columns, and often nearly as riotous. At nearly 300 pages long — not counting the bibliography and various appendixes — it’s hardly a rush job. It’s the breadth of her examples which will leave readers gasping. Thank goodness for her fiery sense of humor. It’s a mandatory release valve for the anger her prose is sure to inspire.

What conservative wouldn’t get red-faced over the Left’s tactics, what Coulter describes as an amalgam of hate, insincerity, and outright deception.

Coulter ties the Left in knots via her mob mentality description, based on the 1896 book The Crowd: A Study of the Popular Mind by Gustave Le Bon — who might as well get a co-author credit here.

“Democrats activate mobs, depend on mobs, coddle mobs, publicize and celebrate mobs — they are the mob,” she writes. And if that weren’t scabrous enough, she’s just getting started.

“The Democrats’ playbook doesn’t involve heads on pikes — as yet,” she writes.

It’s Coulter being Coulter, and if you’re offended it would probably make her day.

Coulter boils down support for ObamaCare via the “mob mentality” lens: “it will provide health care for 30 million uninsured Americans, everyone’s health care will improve — and their plan would save money! … Only the mob could believe it,” she writes.

In “The Historical Context of the Left,” Coulter fashions herself a politically incorrect professor out to label the Left as the heirs to the French Revolution, a topic previously explored in Jonah Goldberg’s Liberal Fascism.

“Liberals don’t like to talk about the French Revolution because it’s the history of them,” she writes, before recalling the beheadings and other atrocities from the era.

It’s an imaginative, if incendiary, way to view the likes of MoveOn.org and the union thugs, but Coulter wastes far too much pulp on the matter. A Coulter book should be read in a few intoxicating sittings.

She later turns her attention to the American Revolution, delivered in her own inimitable style. The text does support tea partier Sarah Palin when it describes how Paul Revere warned the British they would be massacred if they went near Lexington Green.

One tenuous connection between the two revolutions was Thomas Paine, who inexplicably supported the mob-like tactics practiced by the French.

“He was a historical one-hit wonder, desperately trying to find that follow-up single that would put him back on top,” she writes.

At times, Coulter’s barely controlled contempt for liberals bubbles over, and she lets loose with a fusillade of offenses to buttress her points. It almost feels like a jazz riff, impassioned and intoxicating in its venom.

In between the partisan broadsides, Coulter blasts the revised decisions in the Central Park jogger case, gives props to Marie Antoinette for her courage in the face of death, and taunts the Left for its own conspiracy theories regarding “The October Surprise.” The latter makes birthers look like sober-minded scientists.

Need examples of the Left’s hypocrisy? How about noting the liberal rages against the Duke lacrosse players accused of rape back in 2006 and the silence of the left-leaning Innocence Project toward the players’ cause?

Or how did the Democratic Party’s racist recent past (Bull Connor) beget the rise of Al Sharpton?
“The Democrats simply traded one mob constituency for a new one. You might say they traded their white robes for a track suit and a giant medallion,” she writes.

Coulter stands astride two distinct sides of the punditry realm. On one, she marshals compelling facts and humor to hammer home her assaults against the liberal mindset. On the other, she takes every opportunity possible for hyperbole, trampling her salient points.

In the book’s final chapter, indelicately titled “Lucifer: The Ultimate Mob Boss,” Coulter swats liberal icon Saul Alinsky before urging conservatives not to meekly accepted the Left’s tactics. It’s a call to arms, a metaphorical one, mind you. Appeasement simply lets the mob win, she cautions, and that‘s not how you handle an unruly gathering with hate in its heart.

“A mob cannot be calmly reasoned with; it can only be smashed,” she states.

Demonic stands as a tonic for weak-kneed conservatives who might get wobbly as the 2012 presidential elections come into focus. And it’s the best way to make a liberal’s blood boil at room temperature.


Christian Toto is a freelance writer for The Washington Times. His work has appeared in People magazine, MovieMaker Magazine, The Denver Post, The Pittsburgh Tribune-Review, and boxofficemagazine.com. He also contributes movie radio commentary to three stations as well as the nationally syndicated Dennis Miller Show and runs the blog What Would Toto Watch?
Posted by jtf at 7:44 AM

I never laughed so hard at the blatant political propaganda that spews forth from this book. How is it possible in this day and age that someone like her could have ever been a litigator with The Center For Individual Rights? (We can garner a pretty good guess.) Somebody pinch me. Actually, this printed rubbish also appears to be, without a shadow of a doubt, an embarrassingly obvious and extreme example of self-promotion on the part of the "author." Two guesses which political party she hopes to garner favourable attention and reward from? Let's see now, who are the majority of Republicans? The uber rich and old moneyed (and how did they make their money originally, hmm?), and the majority of professionals. How could all these pros allow the other 99% of us little guys to get away with what's proposed in this trash? What? They have absolutely no influence on society? Puh-lease. Go try and fool somebody else. More like agitators have been paid by the scaredy-cats to stir up trouble. Have they forgotten what the word "democracy" means? And you label those who hold such beliefs as DEMONIC? Thank you for showing your true colors. And the full length photo on the back cover? OMG She's got to be vying for a judgeship or some other ladder to the top position. Show the world how truly irrelevant this blond really is Mikey. Hold your heads high all you liberals out there and thank God you're nothing like this pretentious fundamentalist, spewing quotes from Jesus to help her flimsy case just a little bit more. Is she also not aware that God loves all of us and that we are all the same in his eyes? Hopefully, this book will go down as the best political comedy and fact-bending hogwash of all time.