Alone in the Wilderness and the Spotlight 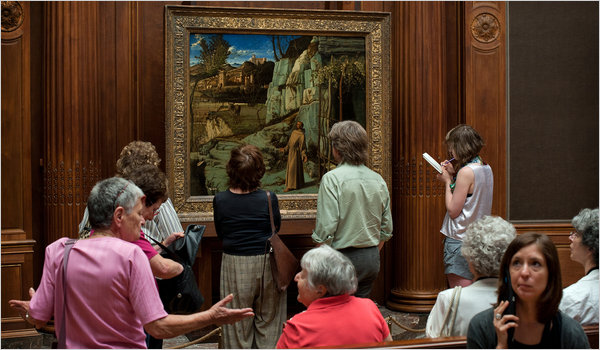 Joshua Bright for The New York Times
In a New Light: Bellini's 'St. Francis in the Desert' Visitors study Giovanni Bellini's painting of Francis of Assisi, which recently returned to the Frick Collection after conservation and study. More Photos »
The Frick Collection has long since mastered the art historical meet and greet. Last spring Rembrandt, seen in a late self-portrait, received fans in the Frick’s skylighted Oval Room.

This summer the guest of honor is no less a celebrity than Francis of Assisi, as depicted in Giovanni Bellini’s painting “St. Francis in the Desert.” The Bellini, like the Rembrandt, is owned by the Frick and recently returned home after a stint of conservation and study. This explains why it’s being given the red-carpet treatment in the form of its very own super-small show titled “In a New Light: Bellini’s ‘St. Francis in the Desert,’ ” which consists of the painting itself and a closet-size multimedia room.

If a picture’s truly great, of course, it doesn’t really need an excuse to get the spotlight. And many art historians rank the Bellini as one of the greatest Renaissance paintings in the United States. It certainly has the presence of a stand-alone event. The eye instinctively goes to it, as to any source of visual drama and mystery.

There’s not much mystery, however, surrounding the history of the picture. It was produced in Venice around 1480, when Bellini was probably in his 40s. (He died in 1516; his exact birth date is unknown.) And it emerged from a fertile aesthetic milieu. The artist’s father, Jacopo, was a pioneer of the Venetian painting boom. His half brother, Gentile, was one of its leading lights, as was his brother-in-law, Andrea Mantegna of Padua, from whose wiry, carved-out style Giovanni learned a lot.

The American collector Henry Clay Frick bought “St. Francis in the Desert” in 1915 and hung it in his Fifth Avenue-facing living room, where it stayed until it traveled up the street to the Metropolitan Museum last year. There it was examined by the conservator Charlotte Hale and passed its physical with flying colors. Basically it needed no more than a dusting off.

X-ray testing confirmed facts that everyone more or less knew. The picture, in oil on three joined wood panels, is pure Bellini, though an assistant coated the panels with preparatory layer of white gesso, spreading it on by hand. (Palm prints and fingerprints are still detectable.) On this clean, light-reflecting surface Bellini made a highly detailed ink under-drawing of the entire composition and adhered to it while painting, making a few adjustments as he went.

All of this is pretty straightforward, as is the Frick display, with the picture on a kind of giant easel in the Oval Room under slightly tweaked natural lighting. Still, there are elements of mystery, starting with the painting’s title. It seems to promise, above all, face time with St. Francis, but as we approach from a distance what do we see? Mostly landscape. And is that landscape desert, as described? No. It’s Central Italy in early spring or fall.

True, the foreground is rocky, a stagelike platform of lava-formed terraces backed by a cliff of cracked, blocky stones. But surrounding this is a verdant world. A pasture, with a grazing donkey, lies in the near distance; beyond that farm fields spread out; beyond them is a walled city with orchards and parks.

Even the rocks, tinted an aqueous green, sprout vegetation, to the obvious benefit of a well-fed rabbit seen peering from a crevice. Water must be plentiful, judging by the presence of a long-necked heron and a small red bird — possibly a kingfisher — hovering under a dripping pipe in the picture’s lower left corner.

St. Francis is somewhat dwarfed by all this, but once focused on, he becomes the center of attention. Standing, arms spread wide, one foot advanced, gazing upward, mouth open, as if he’d been stopped in his tracks or even knocked back by something he’s seen or felt, he’s a magnetic figure, the source of the painting’s drama.

He was, in life, exceptional: a spiritual power generator, a social lightning rod, and a charmer. He was born in the Umbrian hill town of Assisi around 1181, the son of a rich cloth merchant. He had poetic tastes and immersed himself in romantic tales of chivalry. By temperament he was ardent, wired, prone to emotional extremes.

Youthful zeal sent him charging into a local intercity war, as a result of which he cooled his heels in prison for a year. Years later, as a holy man bent on martyrdom, he went to Egypt, where he marched into the court of a Muslim and announced: You need a new religion. The ruler was naturally surprised, but he knew a good person when he met one, and sent Francis safely home.

Francis was a good person, and fearless, and a visionary. He grounded his thinking on the Gospels and took them at their word. Jesus said “give away everything,” so Francis gave away everything — once, every stitch on him.

He could be impossibly self-depriving; people had to persuade him to eat, wear shoes. But he was correspondingly self-giving. You needed a bandage, a pep-talk, a prayer, a kiss? Francis was your man. If he found a hurt bird he nursed it back to health; if he met a wolf with a mean streak, he’d say, “Watch your mouth,” and give it a pat.

Some people thought he’s a lunatic, this guy who suddenly bursts into song, in the middle of nowhere, for no reason, as if he was plugged into an iPod:

“Praised be You, my Lord, with all Your creatures, Especially Sir Brother Sun, Who is the day and through whom You give us light.”

And he’d go on and on this way, about Sister Moon, and Brother Wind, and Sister Water — “very useful and humble and precious and chaste” — and Brother Fire, and Sister Death.

Maybe it was all a performance, a theatrical method of preaching and teaching. But he approached life in a genuinely countercultural way. On the verge of the great age of Humanism, he was an un-Humanist, in the sense that he didn’t hold Man up as the crown of creation. He considered all beings, from bees to bears to people, equally reverence worthy. He was like the Buddha in this. Or maybe the Buddha was Francis in an earlier life.

Francis had visions; in one a crucifix asked him to repair a ruined church, and he did so. He is said to have performed miracles, to have healed the sick and injured with his touch. Near the end of his life, when he was in retreat in a hermit’s cell on a mountain in Tuscany, he himself was injured: he was suddenly pierced with the stigmata, the five terrible wounds of the crucified Jesus.

This is the event taking place in Bellini’s picture, though he depicts it in a somewhat unorthodox way. We clearly see nail marks, tiny dots of ruby paint, in his hands, and microscopic inspection has revealed that there were once marks on the foot visible in the picture. The fifth wound, the gash made by the spear that pierced Jesus’s side, Bellini never shows, as if he thought it would be too conspicuous and too easily give the story away, reduce the mystery.

Nor did he include the winged seraph that in traditional depictions — Giotto’s, say — inflicted the stigmata by shooting penetrating rays in Francis’s direction. In Bellini’s subtle version divine power is visualized as light, almost natural, but not quite.

It falls, intense but dispersed, from the picture’s upper left corner, as if from a sun positioned too high for dawn and too low for noon. Everything in the landscape is silently alive to momentousness in progress. The heron stiffens, the donkey raises its ears, a tree bends, as the light hits Francis full force, illuminating, almost too harshly, his desk, his discarded sandals, the wattle gate on his cell.

The resulting image is of a saint who is also a man, and of a world that is divine, but also not. The Francis who has come down to us in official biographies is a comparable mix of the radical and the conventional. He despised wealth (he literally wouldn’t touch money) and personal authority (he refused to be ordained a priest), but he framed his preaching in the language of aristocratic poetry and submitted unresistingly to the rule of papal Rome.

In Bellini we get some of all of this, though his Francis, a gaunt but elegant ascetic, is easier to admire than to love. His connection to nature seems tenuous: he’s in the middle of it, but he’s not seeing it, or touching it.

So for touch, you turn to Bellini himself, and this is where the Frick’s ’multimedia presentation — overseen by Susannah Rutherglen, a curatorial fellow — comes in. The digital display approaches the painting not as a grand panorama, but as a series of intimate, sensuous, hand-on details that the unaided eye cannot see: moving clouds as wisps of scumbled pigment; tiny daisies stippled into being; the distant shepherd, a mere smudge of paint but with watchful eyes.

And when the digital view focuses on the little donkey, an artist’s skill and a mystic’s vision become one. First we see the animal in the under-drawn image, tenderly formed; then in the painting, every rough hair of its coat defined. Then we move photographically closer and closer and closer, until we finally meet our Brother-Sister Creature virtually eye to eye and pulse to pulse, in true Franciscan perspective.