By Daniel J. Flynn on 3.4.11
The American Spectator
http://spectator.org/ 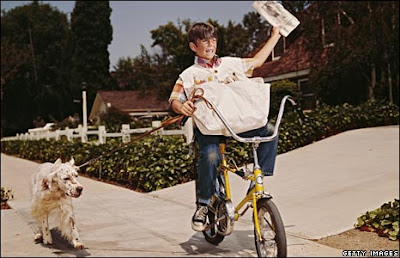 In 1985, everybody that I knew had a paper route. Time magazine's Tom Vanderbilt reports that paperboys have been replaced with papermen. They apparently like to be called "independent delivery contractors." Twenty years ago, Time notes, paperboys made 70 percent of newspaper deliveries. The most recent statistics show that paperboys make just 13 percent of deliveries -- and you've probably noticed that subscriptions are down.

From 1982 to 1987, I delivered the Boston Globe. For those five years, I held three different routes -- two simultaneously -- and filled in for vacationing friends atop that. Mailmen brag of neither rain nor sleet nor snow keeping them from their rounds; newspaper carriers might add Sundays and federal holidays to that list. Paperboy is a 365-day-a-year job.

Time touts lost work experience as a reason to lament the demise of the paperboy. But I didn't deliver papers as a career builder. I did it for the cash. My weekly profits, usually around $15, enabled me to purchase a road Quebec Nordiques jersey, Atari 2600 cartridges, and a bulky 4-inch black-and-white portable television whose supporting cast of ever-expiring D-batteries proved too costly for me to support. Not so frivolous, and unappreciated until a few years later, was the $5,000 college scholarship the Globe awarded for keeping a route for three years. I never got an allowance. I got a job. And when that cash in your pocket is your own, even if you're using it to obtain already-dated electronic gizmos and fashion tributes to the Stastny brothers, you know its value.

Delivery was just one way the route turned a profit. A meek fiftysomething gentleman and his burly blue-collar roommate, surely my first cognizant exposure to gay people, contracted with me to shovel them out for a generous $20 upon significant snowfalls. A senior citizen, weak with emphysema, paid me to pick him up Marlboros. It was the '80s, and they didn't card cigarette-buying nine-year-olds. He had but a few years to live, and I like to think the tobacco certainly increased the quality, if not the quantity, of his life. A shaggy customer, whose clock had stopped sometime during the previous decade, paid me $10 to help him move on a summer Saturday morning. He insisted upon finishing before that afternoon's historic event, Live Aid, which, as soon became apparent, he considered historic for reasons peculiar to him. He excitedly asked, "Do you know that Crosby, Stills, Nash, and Young are reuniting this afternoon?" "No," I informed him. "Do you know that Led Zeppelin and The Who are?"

Other child-labor arrangements proved more stereotypically exploitative. An older woman believed that paying for newspaper delivery entitled her to my delivering her groceries as well. The hounding paperboy in the contemporaneous movie Better Off Dead more closely resembled a few of my customers. The call to go to the store rudely interrupted driveway basketball games, homework, and would-be record scores in Demon Attack. The unpredictability of the imposition haunted me. The 35-cent tip acted more as irritant than salve. For slightly more money, she employed me to remove crumbly insulation around pipes in her basement. Only later did I realize what she had then known: I had extracted more than my weight in asbestos.

Bad customers didn't tip; worse ones avoided paying altogether. Fourth-graders aren't very difficult to bowl over. Collection could be more negotiation session than straight receipt of payment. "Oh, goodness, no. Four weeks? You must be mistaken. Here's two weeks." The Globe didn't absorb the losses. The paperboy did. Shouldering the costs of sweet old-lady scofflaws fostered a healthy childhood habit of saying "no" -- half as long as a four-letter word but twice as offensive to adults.

So when a wealthy young customer -- in the vernacular of the times, a Yuppie -- avoided me for several months, and then declared that my tardy delivery justified non-payment, I pled with the paper office to cut the surly, stingy, and unstable woman from my rolls. "Make one last effort to collect," they directed. Over my objections, I did. She proceeded to swear at me, hit me, and dig her nails deep into my neck. The Globe not only dropped her form my rolls, they flagged her to never receive home delivery again.

The delivery "death penalty" was the least of her problems. In a Henry II-St. Thomas Becket moment, I relayed my story of woe to several enthusiastic listeners. These principled hooligans, fond of hurling broken spark plugs at windows and reenacting Neil Armstrong's moonwalk on parked automobiles, paid restitution. Their loyalty -- even if more to hooliganism than to me -- touched. The paperboy gets paid one way or another.

Despite the drawbacks, routes were sought after. I inherited my primary route from an older brother. I bequeathed it to a younger brother. Occasionally, carriers sold their routes. Now, you literally can't pay a kid to deliver newspapers.

That's too bad. Much of what parents protect children from turn out to be what they need most. Paper routes ensure outside activity every day, responsibility, independence, and familiarity with neighbors. The forced neighborhood interactions included a few children of the 19th century, shut-ins shut off from departed friends and spouses, whose time spent with a child of the late 20th could make a week -- for me at least.

Alas, overprotective parents aren't the sole, or even primary, issue explaining the decline of the paperboy. People don't read newspapers in the religiously observant way that they once did. A byproduct of an uninformed citizenry is an uninformed kidizenry. More than instilling self-sufficiency or a sense of duty, a paper route produced a literate, worldly kid who read the product he delivered. Is it a coincidence that Matt Drudge, Matt Lauer, and Tom Brokaw delivered the news before they delivered the news?

Victrolas, telegraphs, duels, and other such atavisms generally go out of style because society progresses. Paperboys have faded into yesterday because society has decayed.

- Daniel J. Flynn, the author of A Conservative History of the American Left, blogs at www.flynnfiles.com.
Posted by jtf at 8:46 AM