The Libyan people are no more our ally than Qadaffi. 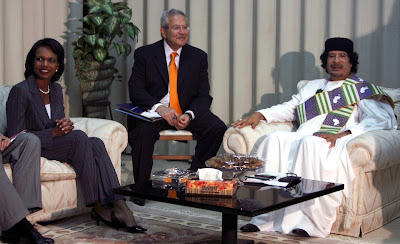 ‘The relationship has been moving in a good direction for a number of years now, and I think tonight does mark a new phase,” said Condoleezza Rice. President Bush’s secretary of state was taking time out from inventing the 70 percent of Palestinians who just want to live side-by-side in peace with the Zionist entity in order to reinvent Moammar Qaddafi.

It was September 2008, and the Freedom Agenda was in full swing, with a few hiccups: Hamas taking over Gaza, Hezbollah strangling what passed for the government of Lebanon, al-Qaeda reassembling in Pakistan, the Taliban resurging in Afghanistan, and, in Iraq, the usual: Shiites killing Sunnis, Sunnis killing Shiites, and everyone killing Americans when they weren’t busy chasing any remaining non-Muslims out of the country. What better time to see Colonel Qaddafi, heretofore a barbaric mass-murderer, as the proverbial leopard who’d changed his spots?

In reality, it had been the swift military rout of Saddam Hussein that induced Qaddafi to renounce (or claim to renounce) his ambition to develop weapons of mass destruction in late 2003. But once the hard-power promise of the Bush Doctrine gave way to the belief that thugs could be democratized into submission, the wily old terrorist found a system he could game. And game it he did.

Yes, yes, I know: We are not supposed to look at Libyans now as they appeared the last time we took notice: a cheering throng greeting Abdel Baset al-Megrahi, the Lockerbie terrorist, whom the Obama administration was cajoled into ignoring when the Brits orchestrated his release from jail to appease our spot-shorn leopard. Nor are we supposed to register that Qaddafi’s main opponents in this 97 percent Muslim country are Islamists who have about as much use for us as they do for Colonel Crazy. No, this is to be the desperately wished-for Arab awakening, so we are to take the Libyans as noble secularists who just want to throw off the yoke of tyranny and establish democracy (and never you mind the sharia).

Eager to get with the program, newspapers, blogs, and television reports tell us that Qaddafi has been America’s incorrigible enemy for 30 years. The problem is, if your memory actually goes back more than ten minutes, you may recall that the same media outlets only recently pronounced Qaddafi downright corrigible.

And why not? After all, that was how the State Department saw it. As if history had never really happened, we agreed to let the strongman receive an ebullient Secretary Rice (“my darling black African woman,” as Qaddafi called her) in the very Bab al-Azizia compound that President Reagan had ordered bombed in retaliation for Libya’s 1986 terrorist attack on a Berlin disco. Qaddafi had targeted American servicemen and managed to kill two of them while maiming hundreds of other victims.

Had Qaddafi really changed in the ensuing 22 years? He arrived at the 2008 love fest arrayed in one of his lunatic costumes. The room, a smitten Associated Press reported, was “redolent of incense.” The dictator couldn’t gush enough over “Leezza,” being especially “proud of the way she leans back and gives orders to the Arab leaders,” as he had told al-Jazeera in a 2007 interview.

That is, nothing had changed. Qaddafi was the same old “mad dog of the Middle East,” the title President Reagan aptly bestowed on him in 1986 — even before the strongman ordered the bombing of Pan-Am Flight 103, murdering 259 people onboard (including 189 Americans) and killing eleven more when the wreckage landed on the small Scottish town of Lockerbie. In 2008, just as in 1988, Qaddafi was the same dyed-in-the-wool terrorist he is today, the kind with whom the Bush administration occasionally professed to know you don’t negotiate. The kind you regard as an enemy, not a rehabilitation project.

But when you are determined to see policy success rather than reality, everything is made to look different. By 2008, the Bush Doctrine was no longer about bludgeoning terrorists into submission and squeezing their state sponsors until they said “Uncle.” That was so retro, so 2001. Now, the goal was to show real political progress in the Middle East. So Colonel Crazy wasn’t a terrorist anymore. He was rebranded an ally in the War on Terror. And hey, enemy schmenemy: “I’ve said many times,” Secretary Rice declaimed, “the United States . . . doesn’t have any permanent enemies.” The Libyans — just like us, according to Rice — had “learned the lessons of the past.” That’s why we were now so ready to “talk about the importance of moving forward.”

And did Qaddafi ever know how to move forward, to bank on our bottomless capacity to overpay for dubious concessions. In 2004, President Bush began removing sanctions and unfreezing assets. By 2006, diplomatic relations were restored and the regime — for which terrorism and a hammerlock on national oil riches were the keys to remaining in power — was removed from the list of state sponsors of terrorism.

Announcing these developments, in exchange for which the U.S. demanded exactly nothing in the way of authentic democratic reform, the State Department lauded “Libya’s continued commitment to its renunciation of terrorism” and its “excellent cooperation” against the “global threat faced by the civilized world.” Oh, sure, Qaddafi’s regime was still, shall we say, “restrictive” — the gentle term State used in asking Congress to open the foreign-aid spigot. But soon, with all the Western guidance Qaddafi was anxiously soaking up, Libya would be a “developing” country. After that, the sky was the limit, and no need to spoil the mood by mentioning the alarming number of Libyans who were crossing Syria to wage jihad against American troops in Iraq.

Finally, to further grease the wheels for Secretary Rice’s historic visit with our new ally, the administration agreed to pay Libya reparations. Yes, you read that correctly. This was for what Qaddafi claimed were damages sustained in Reagan’s 1986 bombing campaign. Drawing a moral equivalence between (a) the comeuppance served up by the United States for a savage attack on our troops and (b) Qaddafi’s mass-murder of innocents in a plane bombing, David Welch, the State Department’s assistant secretary for near-east affairs, cooed that now “each country’s citizens can receive fair compensation for past incidents.” Incidents? Yes, that’s what historic atrocities become when we pretend our enemies are our friends.

But now the enemy who became a friend has become an enemy again. Of course, he never changed — we did. He just used the largesse and support we provided him to tighten his grip on the throne. Are you surprised?

Evidently, the State Department is. Secretary Rice’s successor, Hillary Clinton, suddenly wants Qaddafi gone yesterday. That’s after only weeks of rampage during which her boss, President Obama, couldn’t bring himself to utter a negative word about Qaddafi. In retrospect, maybe the president has decided that the lack of shovel-ready projects was not a good reason for him to use more U.S. taxpayer funds to stimulate “charities” run by the Qaddafi family.

In any event, guess who else wants Qaddafi gone tomorrow? None other than Sheikh Yusuf Qaradawi, the Muslim Brotherhood’s sharia compass, who is still tingling from his recent, triumphant return to Egypt, right across the border from Eastern Libya, where Qaddafi’s fiercest opposition just happens to be. He did make time, though, to issue a fatwa last week calling for the Libyan despot’s assassination.

Not to worry, though. We have it on good authority (the U.S. government) that the Muslim Brotherhood is a “largely secular” organization, with a real passion for democracy. Perhaps if one of the Libyan secularists is moved to carry out the fatwa — which, of course, should be understood as a strictly secular edict — Secretary Clinton could find a new friend of America in Sheikh Qaradawi. They say Bab al-Azizia is lovely this time of year.

— Andrew C. McCarthy, a senior fellow at the National Review Institute, is the author, most recently, of The Grand Jihad: How Islam and the Left Sabotage America.
Posted by jtf at 7:55 AM