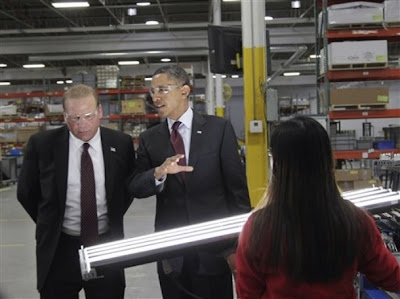 
President Obama hasn't abandoned his jobs-killing global-warming agenda, just wrapped it in the rhetoric of "clean energy." And that may be enough to get Republicans to sign on.

That "clean energy" is code for "anti-warming" is obvious, given that even Environmental Protection Agency numbers show that virtually all emissions have dropped dramatically in recent decades -- except for greenhouse gases.

To cut those, Obama's budget aims to hike Department of Energy spending by 12 percent from 2010 levels. He proposes $8 billion more for various clean-energy programs -- on top of the $30 billion "invested" via the 2009 stimulus. Even that's only the tip of the iceberg.

To pay for it all, Obama would stick it to Big Oil. He wants to eliminate $43 billion in oil-tax breaks over 10 years. That would be fine if he were aiming for a "level" energy market, with the government playing no favorites; in fact, he's just looking to divert the subsidies to his favorites.

Despite his talk of promoting nuclear power, the president's budget cuts support for it by 0.6 percent from 2010 levels. The big winners are -- surprise! -- solar (88 percent rise), biomass and biorefinery (57 percent), geothermal (136 percent) and wind (61 percent).

Obama is also doubling the budget of the Advanced Research Projects Agency to encourage R&D on renewables. That's because progressives are suddenly convinced (thanks to "Where Good Technologies Come From," a paper by the Breakthrough Institute) that the basic research for nearly every major technological invention -- blockbuster pharmaceuticals, high-yield crops, the Internet -- has been the result of government funding.

Pumping money into pie-in-the sky energy projects has been a perennial presidential project since Jimmy Carter. But Obama has a new wrinkle: The White House believes that past pushes for alternative fuels failed (despite subsidies) because they did nothing to ensure a market for the new products. So Obama has decreed that he wants 80 percent of America's energy to come from clean sources by 2035.

That won't happen automatically, so the Center for American Progress (the Obama White House's unofficial think tank) argues for a federal "35 by 35" standard -- mandating that 35 percent of America's energy come from renewables by 2035. This means the feds would force all utilities to generate more than a third of their electricity from renewables -- a guarantee of far higher prices.

A Heritage Foundation study found that even a scaled-down version of the plan, a 22.5 percent renewable standard by 2025, would bump household-electricity prices 36 percent and industry prices 60 percent by 2035 -- producing a net GDP loss of $5.2 trillion between 2012 and 2035.

So much for green growth and jobs.

Obama also means to make America's transportation oil-free to ensure a low-carbon future for mankind. To this end, he wants a million electric vehicles on the road by 2015.

So, while low-income families face a cut in heating assistance from Uncle Sam (and higher electric bills), rich people would get $200 million for a $7,500 tax rebate to use toward each $40,000 Chevy Volt.

Obama also wants a $4 billion downpayment toward a six-year, $53 billion plan to give 80 percent of Americans access to high-speed rail. In fact, his own transportation secretary admits that this can't be done for less than $500 billion.

Obama has no political capital left to pursue grand global-warming schemes, so he is taking an incremental, piecemeal approach. Once these programs are in place, the constituency of activists and industry they'll spawn will use their very failure to argue for their expansion.

You'd think that Republicans would have nothing to do with this. But unlike global warming, clean energy polls well. So virtually no Republican has denounced it.

Sen. Lindsey Graham (R-SC) actually supports a renewable standard. Rep. Fred Upton of Michigan, who chairs the House Energy and Commerce Committee, has committed only to examining Obama's energy budget "line by line" -- not killing it.

Global warming is a dying cause because the costs of the favored "fixes" for the problem vastly outweigh the supposed benefits -- and China and India aren't going to stop industrializing, and stay poor, simply to please Western elites. Republicans should wake up and not let Obama use the guise of clean energy to keep the anti-warming crusade alive.

Shikha Dalmia is a Reason Foundation senior fellow.
Posted by jtf at 7:43 AM