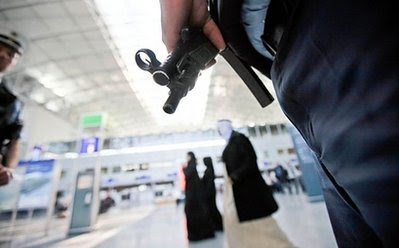 A policeman armed with a machine gun patrols at Terminal 2 of the airport in Frankfurt/M., western Germany. German authorities said Thursday they suspected a Kosovan man arrested over the fatal shooting of two US airmen was an Islamic extremist, but played down fears he was part of a cell.
(AFP/DPA/Frank Rumpenhorst)

Like so many jihad plots and actual jihad attacks and attempted attacks these days, the jihad murder of two U.S. airmen and the wounding of two others outside the Frankfurt Airport in Germany Wednesday was initially dismissed as having nothing to do with terrorism. According to the German news agency DAPD, Boris Rhein, the interior minister for the German state of Hesse hurried to the airport and almost immediately declared that there were no indications that the shootings had been a terror attack.

One wonders what actually would constitute a terrorist attack for such analysts. Would the murderer have to announce that he was about to carry out a terrorist attack before he started shooting? Would he have to be carrying an al-Qaeda membership card? In the case of the Frankfurt Airport shooting, there were, in fact, numerous indications that this was a jihad attack. The murderer was Arif Uka, a Kosovar Muslim. Despite widespread assumptions among American analysts that Kosovar Muslims are mostly moderate, secular, peaceful, Westernized, and grateful for U.S. intervention on their behalf, in reality al-Qaeda and other jihad terror groups have been active in that region for over a decade.

And even aside from the possibility of an actual link to al-Qaeda, Muslim hardliners have been streaming into Kosovo and the neighboring regions for just as long, and have been challenging on Islamic grounds the relatively secularized and non-combative Islam of the native Muslims. What’s more, Arif Uka is twenty-one years old and lives in Frankfurt, which has long been a hotbed of jihad activity in Germany.

As Uka opened fire, he shouted “Allahu akbar,” the universal cry of jihadis worldwide which Muhammad Atta reminded his fellow 9/11 hijackers to shout as they began operations, since, he said, the sound of it struck terror into the hearts of unbelievers. Another report suggests that he shouted “jihad, jihad.”

Nor would this be the first jihad attack against Americans by a Kosovar Muslim. Stratfor Global Intelligence reports: “A number of Albanian individuals were part of the Fort Dix plot in the United States in 2007. U.S. authorities broke up a militant cell in North Carolina that involved an individual of ethnic Albanian origin. In 2009, a U.S. citizen of Albanian descent from Brooklyn, New York, tried to go to Pakistan for militant training.”

Barack Obama quickly issued a statement saying, “I want everybody to understand that we will spare no effort in learning how this outrageous act took place, and in working with German authorities to ensure that all of the perpetrators are brought to justice.” Yet it is absolutely certain that if Arif Uka turns out to have been a pious, devout Muslim who read the Qur’an and cited it as a justification for the idea that Muslims have a responsibility to fight against infidels, that is one lead that Barack Obama will not follow up. No matter how many Muslim gunmen shout “Allahu akbar” as they open fire on non-Muslims, at this point the dogmatic lines have been drawn: analysts in the top military and intelligence posts in the U.S. and Europe understand that Islam is a religion of peace that has been hijacked by a tiny minority of extremists, and they have been taught to understand that that fact somehow frees them from the obligation of understanding the enemy’s belief-system and formulating effective ways to combat it.

The script has long been written. The characters are cast. With every new jihad plot, all the media, government and law enforcement officials, and Islamic leaders need to do is fill in the blanks. In fact, I even pasted sections of this article in from older articles on earlier jihad attacks, including those previous three sentences and much of the lead paragraph – because the story never changes. All one need do is fill in the blanks in the template. In fact, Islamic groups in the U.S. have been shown to do this in the other direction, when a few years ago a template was found for condemnations of jihad terror attacks and protestations that they had nothing to do with the Islamic doctrines that their perpetrators avowed as their primary inspiration.

And so everyone follows his own template: Islamic groups issue their pro-forma condemnations of the latest jihad terror attack, which never seem to lead to any honest or forthright examination of the texts and teachings of Islam that inspire Muslims to shout “Allah akbar” and murder infidels. Government and law enforcement officials publish their expressions of outrage and vows to track down the perpetrators and punish them to the full extent of the law – vows that are rendered somewhat hollow by their consistent and essentially unanimous unwillingness to look honestly at the ways in which such attacks are inspired by Islamic teachings. This in turn prevents them from adopting any realistic measures to prevent such attacks in the future.

And I myself, as the writer of this article, have so many articles that I have written in the past about jihad terror plots or successful attacks, and the obfuscation and denial that followed in the wake of them, that I can use – and have used in this piece – to skewer yet again that obfuscation and denial, and to ask how many more innocent non-Muslims are going to have to be murdered before the elites in politics and the media begin to examine the problem of Islamic jihad seriously and honestly.

But really, how many more times must these templates be used? How much more murder and Allahu-akbaring must there be before American and European officials begin to take a hard look at immigration policies, at the short-sighted realpolitik it has pursued in the Balkans so as to create an Islamic supremacist beachhead there, and at multiculturalism itself. Several European leaders recently conceded that multiculturalism was a failure; this was a positive step, but so far none of them have actually done anything to roll back its deleterious effects.

The European Union and the United States have a great deal of work to do if they wish to make sure that there are no more jihad attacks like the one that Arif Uka perpetrated on an airport bus in Frankfurt on Wednesday. But there is still no clear, unambiguous indication that they really do have any serious interest in taking the necessary steps to protect their citizens from such random jihad violence, or even to preserve their free societies. Such steps would require no setting-aside of the legal rights that any citizen of an E.U. country or the U.S. enjoys; but they would certainly require the discarding of assumptions that are as tightly held as they are howlingly false.