By George H. Wittman on 3.4.11
The American Spectator
http://spectator.org/ 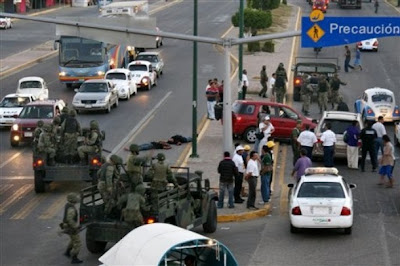 Soldiers arrive to secure and area where the bodies of two men were found in Acapulco, Mexico, Sunday, March 14, 2010. Nine people were killed in a gang shootout early that Sunday in Acapulco. (AP)


The Mexican drug cartels up to last year had avoidedscaring the tourists: no battling in Cancun -- at least not right in the resort areas themselves -- no shooting in Acapulco; and so on. That's over now. At the height of this year's February tourist season, 15 taxi drivers and a few passengers were killed in Acapulco. This followed a mid-January slaughter of 31 in that resort area. The year before in March a total of 17, including 6 police, were assassinated in what has been referred to as Mexico's Pearl of the Pacific. The drug cartels are no longer honoring their deals with the resort owners.

According to local journalists, the taxi drivers in years past acted as the eyes and ears of the police. It was a convenient arrangement. The cops were able to keep a discreet eye on the always vulnerable but wealthy tourists, and at the same time the taxi drivers received some protection for their "guide" activities in recommending everything from high stakes poker games, incidental drug availability and, of course, prostitutes. It was all quite circumspect and traditional to resort communities in many parts of the world. The drug gangs took them over and the result has been taxis are now the couriers-of-choice -- and fair game.

The resort owners of Cancun employed the same local toughs who later became the soldiers of the cartels to provide protection for their guests from traveling scam artists, thieves, and that part of the underworld that preyed on Cancun's seasonal target of students on school break. The arrangement took a great weight off the job of the underpaid local police and provided useful local employment. Now drug trafficking has increased employment, but also local insecurity and premature death among the formerly ubiquitous "beach boys." Two were killed in January. Nonetheless Cancun remains Mexico's preferred beach resort, if one doesn't mind vacationing under the protection of Los Zetas.

The cartels have destabilized the entire "hand-in-glove" system that had existed for years between law enforcement, the holiday industry, and the security provided by traditional Mexican organized crime. If the Corleone family actually had existed outside of their Hollywood creation, they would have lamented the fact that the drug cartels were "ruining the neighborhood."

The real test will come in the next month as American college students begin their annual Spring break. The Cancun hotel association is doing everything it can to create a secure environment, but the cartels are just not playing ball. The government of Felipe Calderon, as previous Mexican administrations before him, counts on the tourism industry for a major portion of their yearly service sector income and employment. The impact of the ongoing drug wars now adversely affects broad areas of society, even as the profits continue to buoy up investments.

When 30,169 people are killed as a result of drug wars in the four years of a presidential administration (Mexican Govt. statistics 2006-2010, including 12,456 Jan.-Nov. 2010), there must be a recognition that a civil war exists. And yet Mexico is still treated as a friendly neighbor with an unfortunate problem by the White House. The Mexican government may be quite correct when it points to the U.S. narcotics consumer as the reason for the scope of the illicit trade, but it is also true that Calderon encourages the Obama Administration to pretend there is no connection between the cartels' smuggling of humans and drug trafficking.

The latest example of purposely unexplored action has been the movement in Pima County, Arizona to secede from Arizona in order to establish a 51st state on the Mexican border. Apparently, certain Pima County authorities want to ensure freer access for all goods and human travel between the two countries. To suggest that this initiative is unconnected to the conflict over illegal immigrants challenges the public's intellect.

Another puzzle was created recently when the combined forces of ICE, FBI and DEA acted in swift response to the killing in Mexico of ICE Special Agent Jaime Zapata and wounding of his companion S.A. Victor Avila. The result of this joint task force operation in a matter of a few days was the arrest of more than 100 people, the seizing of $4.5 million in cash and sizeable quantities of meth, cocaine, heroin and marijuana in several hundred locations around the U.S. Los Zetas members are the prime candidates for the shooting and it is presumed that those arrested in the raids principally had connections to this group.

Carl Pike, assistant special agent of the DEA Special Operations Division, said the raids were designed "to disrupt drug trafficking operations in the U.S." It is obvious that the entire operation was definitely "personal not business" -- all of which is quite understandable. The question arises, though, of how more effective similar activities could be if the secretary of homeland security, Janet Napolitano, unleashed her considerable anti-drug trafficking forces on a regular basis rather than restricting such actions to such a "personal" reaction to one agent's tragic death.

The Homeland Security department has allowed false stories to be perpetuated such as the reverse traffic in guns from the U.S. to Mexico. Why is that? It has turned out that detailed analysis by the independent STRATFOR group indicated that the figure of 90% of smuggled guns into Mexico was in itself off by 90%.

It's about time the Obama Administration accepted its responsibility to correctly identify the scope of the issue and protect the American public from the dangers that Mexico's economic and human turmoil brings. While this may be seen as a political problem, it is even a greater issue of governmental ethics. Get some backbone, Washington! The time for symbolic action is over. That is the real way to honor Jaime Zapata.

George H. Wittman writes a weekly column on international affairs for The American Spectator online. He was the founding chairman of the National Institute for Public Policy.