There Oughtn’t Be a Law

République française has banned the burqa. Along with the face-covering veil (the niqab), the burqa is the garment with which Muslim women conceal their bodies from head to toe. More accurately, it is the instrument by which their bodies are concealed. In fundamentalist Muslim communities, the burqa is not worn by a woman’s free choice. It is imposed, a product of cultural submission that reflects the subordinate status — in a real sense, the chattel status — to which women are consigned in Islamist ideology. 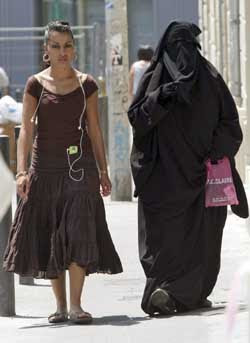 The new French burqa law was announced this week. Not a social debate: a law. Western societies are running out of gas for the same reason Western economies are sputtering: They are over-lawyered and, hence, hyper-regulated. We’re incapable of comprehending public controversy through anything but the most legalistic prism, particularly when individual liberty is implicated.

Thus we have the tyranny of the lowest common denominator. The tune is called by that rarest of creatures: the woman living in the West who wears the burqa because she wants to wear the burqa. Of course there are such women. Some are merely eccentric, but most burqa volunteers are affirming a civilizational chasm. In Islam, the concept of “freedom” is nearly the opposite of what the non-Muslim West takes it to mean; it is perfect submission to Allah. That is the only life choice the voluntarily shrouded woman makes, and the burqa is emblematic of all the doctrinal subjugation that necessarily follows.

Bully for her. But what about the other women who don the burqa? What about the women who are extorted into cloaking themselves under pressure from a culture characterized by arranged marriages and honor killings? These women are pressured to submit because others have submitted. They are “captive women behind bars,” as French president Nicolas Sarkozy describes them, making a metaphor of the grilled visor the burqa places across women’s eyes. These women and girls are in France, but they are not free. They are “shut out from social life and robbed of any identity,” as Sarkozy puts it, and the burqa is their moving prison, enveloping every step. It extends the republic’s 750 zones urbaines sensibles, “sensitive urban areas” — Islamic enclaves over which the French state has effectively ceded sovereignty to sharia authorities.

This is a social problem, not a legal one. Law is the steel by which a body politic reinforces its vibrant, pre-existing mores. It is not a device for creating mores or for bringing to heel those who are at war with the body politic. Indeed, for Islamists seeking to destroy the West, the law is a weapon in their arsenal — the device by which they hamstring a self-consciously law-worshipping society. For a dying society, though, a law, like the burqa law, is about as useful as a band-aid.

Islamist ideologues are ascendant because they are moving what they are proud to call their “civilizational jihad” against the West from the battlefield, where they know they cannot win, to our institutions, where the scales tip in the Islamists’ favor. They are culturally confident. We, on the other hand, are ambivalent about whether our culture deserves to survive. No law can solve that problem.

France is trying its burqa ban nonetheless. The United States, by contrast, seeks to impose social cohesion by capitulating to sharia at the expense of the First Amendment. That is the latest twist in the brouhaha over the Ground Zero mosque.

Last weekend, at the crater formerly known as the World Trade Center, protester Derek Fenton was photographed burning pages from a Koran, following through on an obscure Florida pastor’s threat to torch Islam’s holy book. Fenton, it turned out, was an 11-year employee of the New Jersey Transit Authority, which promptly fired him when the photos went public.

But hold on a moment: Fenton, who was charged with no crime, was engaged in constitutionally protected expression. It is irrelevant that his conduct may be judged foolish or offensive. It makes no difference that there were less provocative ways to make the same point. Or does it?

The incident occurred in his off-hours and was unrelated to his job. Should it matter that riotous Muslims might seek their vengeance against his state employer, thus endangering train passengers? Not according to the Supreme Court. The American flag and all it symbolizes cannot be shielded from desecration, we are told, because free speech is the defining value of a free society. We don’t give a veto to those it offends, for its very purpose, often its most salutary purpose, is to offend. The justices reaffirmed the principle in Texas v. Johnson (1989): Free expression “may indeed best serve its high purpose when it induces a condition of unrest, creates dissatisfaction with conditions as they are, or even stirs people to anger.”

Did the Court mean any people, or just non-Muslims? Is the principle really as transcendent as it sounds, or is it just high-minded rhetoric? Is it just the way our dissipated rulers couch the lesson that, when it comes to attacks on Western values, we must accept them because we probably deserve them?

All the recent talk of Koran burning spurred Justice Stephen Breyer to suggest that free expression may need an Islam exemption. That prompted justifiable outrage, but it should have surprised no one. The Obama administration has already joined the Organization of the Islamic Conference in a UN resolution designed to make blasphemy against Islam illegal. And the president’s latest appointee, Justice Elena Kagan, is a sharia enthusiast who argues that government may curb free expression whenever it decides the “value” of speech is outweighed by other “societal costs” — which is to say, when doing so elevates progressive pieties.

This is of a piece with other recent episodes of what Roger Kimball calls “preemptive capitulation.” We also learned this week that Molly Norris, the Seattle cartoonist who proposed “Everybody Draw Mohammed Day,” has changed her name and gone into hiding. Couldn’t the FBI have protected her from Islamist rage? Evidently not: It was the Feebs who advised her to go dark.

The ethos of preemptive capitulation is all around us. It ran through last year’s refusal by Yale University Press to publish Jytte Klausen’s book on Muslim rioting over cartoon depictions of Mohammed until the book was purged of the cartoons. Even such classical representations of the prophet as Gustave Doré’s illustration of Dante’s Inferno, which portrays Mohammed as a “sower of religious discord,” had to be censored out of fear that the religion of peace would go medieval. The ethos informed a New Jersey judge who refused a protective order to a woman being serially raped by a Muslim man she was trying to divorce — after all, the jurist reasoned, the man was simply following his religious principles, under which his wife was no more than a vessel, bereft of any right to say no. The ethos led uniformed police to arrest Christian evangelists for handing out copies of St. John’s gospel on a public street in heavily Muslim Dearborn, Mich. Camouflaged as a crackdown on “disturbing the peace,” it was transparently the enforcement of sharia’s prohibition against preaching religions other than Islam. And the ethos is exploited by Imam Feisal Rauf, who now concedes the Ground Zero mosque was a bad idea but insists we must accept it lest “the radicals” explode in murderous rage.

It is the ethos of self-loathing. That is our burqa: our feebleness, our lack of cultural confidence. To shed it, we will have to rediscover why the principles it cloaks are superior and worth fighting for. If we don’t, the law won’t save us any more than it will save France.

Photo: (Claude Paris/Associated Press)
Posted by jtf at 6:19 AM