The president overestimates the government's ability to solve problems. 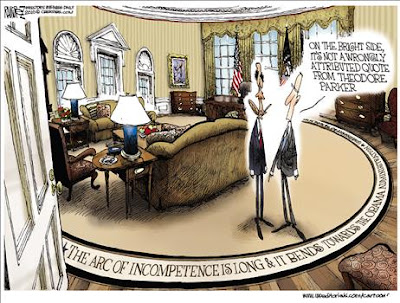 ‘Washington: We Have a Problem” proclaims Vanity Fair magazine. In an eerie echo of the verdicts passed during the presidency of Jimmy Carter, namely that the presidency was “too big for one man,” Vanity Fair now declares “The evidence that Washington cannot function — that it’s ‘broken,’ as Vice President Joe Biden has said — is all around.”

The Vanity Fair piece is a long apologia for President Obama’s perceived ineffectiveness, and reflects — no surprise here — the Obama interpretation of events. “The G.O.P.,” writes Todd Purdum, “has spent most of the period since the inauguration in near lockstep refusal to give the president votes for any of his major initiatives, from the economic-stimulus bill to health-care reform.” This is President Obama’s constant plaint — though it rings hollow coming from someone who took office with comfortable majorities in both houses of Congress.

But in the course of documenting the difficulty of governing, Vanity Fair does make a conservative point. Government is too big. Purdum quotes from just one day’s Federal Register:

The edition for this ordinary Wednesday comes in at 350 pages of dense, dark type. It is unimaginably varied: you’ll find rules for the importation of Chinese honey; proposed conservation standards for home furnaces; permitting procedures for the experimental use of pesticides; announcements concerning the awarding of new radio and TV licenses; and hundreds of other items.

The president himself doesn’t at all concede that government is attempting to do too much (and failing at most of it). On the contrary, his vanity (and it is a common one for left-wingers) is that he believes his particular ideas on business investment, medical procedures, housing, and thousands of other matters are the solutions to our woes, but “politics” keeps getting in the way.

We’ve seen President Obama’s delusions of expertise on display before. Without any trial period, demonstration project, or peer-reviewed study, the federal government dictated that medical records be digitalized and extracted $19 billion from taxpayers to fund the transition. The new systems, the president insisted, would prevent errors, reduce costs, and improve patient care. But as the Wall Street Journal reported, “a 2009 study in the American Journal of Medicine found that hospitals with more-advanced electronic systems fared no better than other hospitals on measures of administrative costs. . . . Meanwhile, many doctors and nurses say they’re frustrated with the technology. While some say electronic records have improved the way they practice medicine, many others say the systems are time-consuming distractions that take away from patient care.”

Digitalized medical records would certainly have evolved with time — just as paper books and newspapers are rapidly losing ground to their electronic competitors. But without government intrusion, the programs would have developed organically, adjusting to user feedback and actual experience — and costing the taxpayers nothing.

At his September 10 press conference, the president announced another “common sense” idea: We must stop “giving tax breaks to companies that are shipping jobs overseas.” A familiar trope from the 2008 campaign, this “idea” is really another tax increase.

The president’s refrain notwithstanding, there is no section of the U.S. tax code that rewards U.S. companies for outsourcing American jobs. American firms pay taxes on their worldwide income. Our effective corporate tax rate, the highest in the OECD according to a Cato Institute study, puts our companies at a competitive disadvantage abroad. The tax code accordingly does permit U.S. multinationals to “defer” taxes on income earned abroad that is reinvested abroad. They pay taxes on that income only when they repatriate the earnings to the United States.

But eliminating the “deferral” would simply increase corporate rates still further, undercutting the profitability of American companies with overseas operations. As Cato’s Daniel Griswold explains, “There is no evidence that expanding employment at U.S.- owned affiliates comes at the expense of overall employment by parent companies back home in the United States. In fact, the evidence and experience of U.S. multinational companies points in the opposite direction: foreign and domestic operations tend to complement each other and expand together. . . . More activity and sales abroad often require the hiring of more managers, accountants, lawyers, engineers, and production workers at the parent company.”

But reducing taxes, like reducing regulation, or permitting the market to shape digital medical records, offends President Obama’s preference for top-down decision-making. He isn’t deciding, Carter-like, who should use the White House tennis courts, but he is attempting to do pretty much everything else, with similar results.

— Mona Charen is a nationally syndicated columnist. © 2010 Creators Syndicate.
Posted by jtf at 7:46 AM

All of this is another good reason for scrapping the entire tax system and replacing it with a "Fair Tax" or "Flat Tax" or some other variety of a single, unmodifiable, tamper-free, demagoguery-free system that will, once and for all, take taxes OUT of the perpetual 2-4-year political cycle.
Can you imagine how WONDERFUL it would finally be to go an election cycle without hearing a word about taxes, on either side, because it is no longer an issue? Just imagine it.
Settle "Taxes" once and for all, forever and ever, America. Have the guts to just settle it, and then... indulge for a while in the glorious silence. Oh, it won't last forever--there will be plenty of other issues, but at least they'll be different ones.
Having the guts to settle it, of course, means having the guts to embrace CHANGE. America hasn't had that kinds of guts yet -- sure didn't in 2008. The only thing Obama ever knew about change was how to pronounce it in a pretty speech. He's never had anything remotely like the imagination, guts or will to initiate Change like this country really needs, and why? Because he's a political animal whose bread and butter is the same old, worn-out demagogic class-warfare propaganda (very well exposed in Charen's article) that the Centralized Power Tin Gods from V. Lenin on have used over and over again to turn whole countries and continents into monuments to themselves.
Well, Obama is one "The One" we can't afford to let pursue his monument building. We have GOT to get this bizarre amalgam of Messiah-complex ego and petulant, puerile responsibility dodger OUT of there before it is too late. His incompetence is no surprise at all: what did you expect from someone who never had a real job and whose only claim to fame was a bag of oratorical tricks developed in desperation on the campaign trail? The sad thing is, we seem to have had enough of an unsophisticated, "born yesterday" populace to fall for Obama's old, old script. They were dumb enough to think there was something new in it. I merely pity the poor saps who were fainting at Obama's rallies, and thinking he was going to fill up their gas tanks for them and pay their mortgages. But I have pure contempt and loathing for media types, like Matthews and Olbermann, who giggled orgasmically and squealed to the whole world how Obama was the next thing (if that) to God. The nice part is, history will rightly condemn them for it and relegate them to their deserved ash heap.