By Jonathan Aitken from the September 2010 issue of The American Spectator
http://spectator.org/ 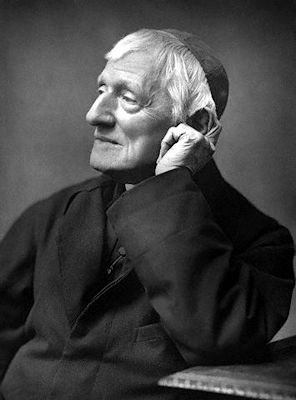 Cardinal John Henry Newman(1801-1890) was at the center of many controversies and calumnies during his life. He is back in the headlines again, 120 years after his death, because his beatification -- as the focal point of Benedict XVI's papal visit to Britain that begins today -- is resurrecting the Newman tradition of attracting trouble.

Among the hares that the soon-to-be Blessed Cardinal has started running are a row about his sexuality; an argument about whether he was a dissident rebel against papal infallibility; and a surge of ill feeling over the soaring costs of the beatification ceremony. These stories have been filling a surprising quantity of column inches and chat show minutes. Are they just storms in an ancient ecclesiastical teacup? Or does Newman and his beatification have some real spiritual relevance for the modern world, particularly for the aggressively secular and increasingly Muslim-influenced British public?

Newman's most enduring footprints on the sands of time and theology were made by his talents as a writer. His autobiography Apologia Pro Vita Sua; his best poems such as The Dream of Gerontius or "The Pillar of Cloud" (later turned into the hymn "Lead Kindly Light"); and his famous treatise on academic freedom, The Idea of a University, are all classics in their different genres. But in his Victorian age it was Newman's spiritual journey from early skepticism to evangelical Protestantism, High Church Anglicanism, and eventually Roman Catholicism that unleashed the strongest passions among his divided contemporaries.

The divisiveness continues but on different grounds. Was Newman homosexual? This is an issue of great excitement to campaigners of the gay lobby. They cite their hero's close relationship with Ambrose St. John, a lifelong friend who shared a house and eventually a grave with Newman. They also make much of the Cardinal's mannerisms and appearance, which would surely justify the modern term "camp." His latest biographer John Cornwell (Newman's Unquiet Grave: The Reluctant Saint, 2010) sums up his subject's demeanor as a cross between "an eternal monastic novice" and "a high bred lady." But such combinations were part of the zeitgeist of England's academic and ecclesiastical elites in the 19th century, as were their intense but platonic friendships. Since there is no evidence to suggest that Newman deviated from his self-proclaimed life of celibacy, further speculation on his sexuality is pointless. Moreover, it detracts from Newman's true importance and relevance to the 21st century, namely his pioneering role as a voice of religious conscience.

Newman's conscience did not give him a quiet life. Throughout his career he was troubled by stress-related illnesses; high profile controversies; dismissals; upheavals; resignations; polemical spats with leaders of church and state; a prosecution for criminal libel; and dramatic changes of spiritual direction. In his youth he was extreme in his hostility to Rome, denouncing the pope as "Antichrist" and Catholicism as a "polytheistic, degrading and idolatrous" religion. But after he'd moved to the position of a high church theologian, his sermons and tracts made him an immensely influential figure, particularly as one of the founders of the Oxford Movement which launched the Anglo-Catholic wing of the Church of England.

After his conversion to Roman Catholicism in 1845, Newman was vilified as a hate figure by some hysterical Protestants who feared that large swathes of church-going England would soon be taking the Pope's shilling. But Newman remained his own man. He accepted Catholic doctrine but with liberal qualifications. He was ambivalent about the newly formulated dogma in 1870 of papal infallibility, famously remarking: "I shall drink-to the Pope, if you please -- still to Conscience first and to the Pope afterwards."

Intriguingly, it would appear that the Cardinal's dissident thoughts on conscience may be one of the drivers of his imminent beatification by the pope, who has long been fascinated by Newman. When Benedict XVI, as Cardinal Ratzinger, led a seminar on conscience at a synod of bishops in 1981, he singled out Newman for praise. In Newman's writings, said Ratzinger, conscience "received an attention it had not received in Catholic theology since St. Augustine." He went on to say that both Newman and Augustine had recognized the priority of a profound level of conscience, which should be preeminent in moral judgements "because we could never judge that one thing is better than another if a basic understanding of the good had not already been instilled in us."

The current media noise about Newman's beatification is loudest about the money being spent on the papal visit. This is linked to other outbursts of Benedict-bashing which suggest that he is coming to Britain "to sanitize Newman" and to suppress all sorts of other uncomfortable truths about matters such as gays in the priesthood and child sex abuse scandals. This is about as illogical and inaccurate as the vilification that Newman had to endure in the 1840s.

There is little doubt that both the finances and the administration of the papal visit have so far been badly handled. The Vatican is said to be furious with the English hierarchy over its poor administration of the logistical arrangements. The costs are soaring and the planning is in disarray. The pope's beatification mass for Newman was scheduled to be held at Coventry Airport, with an expected attendance of more than 200,000. At the eleventh hour it has been switched to a park in Birmingham, which can only accommodate 80,000 worshippers. Even after this downsizing there is much grumbling in the pews as the Catholic faithful are being asked to fork over $7 million to fund what many see as an expensive extravaganza.

David Cameron's new coalition government has also become worried about the troubles besetting the first state visit it is to host. So it has underwritten a larger share of the costs and appointed a logistical supremo. He is Lord Patten, a leading liberal Catholic who has done the state some service as a former governor of Hong Kong, cabinet minister, and chancellor of Oxford University.

Although Pope Benedict is not noted for his theological liberalism, he may surprise his wider British audience by continuing his earlier championing of Newman's view of conscience. For this is a theme that speaks across the secular, spiritual, and agnostic divides in a multi-faith society. The central message of Newman's life is that nobody should accept in docile fashion what they are taught by their parents, their school, their church, their mosque, or by any self-proclaimed source of authority. Instead they should travel on their own journey, searching for truth by the light of their conscience.

If the combined forces of Cardinal Newman's memory and Pope Benedict's preaching can encourage people in Britain to search their consciences and find the great truths proclaimed by Jesus Christ, then contrary to current expectations this will be a papal visit and a beatification ceremony well blessed by success.

- Jonathan Aitken, The American Spectator's "High Spirits" columnist, is most recently author of John Newton: From Disgrace to Amazing Grace (Crossway Books). His biographies include Charles W. Colson: A Life Redeemed (Doubleday) and Nixon: A Life, now available in a new paperback edition (Regnery).
Posted by jtf at 10:44 AM