The Road to Wahhabism

Washington’s Islamic Center is an example of how moderate Muslims become marginalized.

Supporters of the proposed $100 million Islamic center near Ground Zero in Manhattan argue that it offers moderate Muslims an opportunity to practice their faith and become ambassadors of Islam to America. Yet the little-known history of Washington, D.C.’s Islamic Center shows how the entity controlling the purse strings can transform even a moderate ecumenical institution into a mouthpiece for Wahhabism, an intolerant form of Islam practiced in Saudi Arabia. 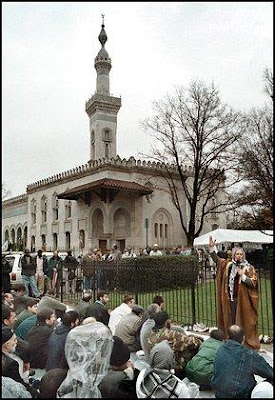 Washington’s Islamic Center, a magnificently arched structure gracing Massachusetts Avenue on Embassy Row, was conceived in high principle as a “religious organization to provide a place of worship for the members of the Islamic faith.” Its opening ceremony, in 1957, commanded the presence of President Eisenhower, who praised Islam’s contributions to the “advancement of mankind” and concluded with the resolution that “America would fight with her whole strength for your right to have your own church,” noting that “without this, we would be something less than we are.”

The center’s first board of directors was truly representative of the Islamic world, including members from Egypt, Iran, Iraq, Syria, Saudi Arabia, Afghanistan, and Pakistan. And its stated mission was full of promise, including a commitment to “enlighten American public opinion on the Islamic Countries . . . and to promote friendly relations between the Muslim world and the Americas.”

Alas, under Saudi control since the mid-1980s, the center has become a hotbed of misogyny and anti-American rancor. In the 1990s, for instance, it brought in Wahhabist cleric Ali Al-Timimi to preach. In 2005, a U.S. federal court in Virginia sentenced Timimi to life in prison after convicting him of ten counts related to terrorism, including soliciting fighters to wage war against the United States and counseling others to aid the Taliban.

Basing its stance on sharia law, the center also recently prohibited women from worshipping in its main prayer hall. In March of this year, three D.C. Metropolitan police officers entered the center — at the imam’s request — and removed six Muslim women who were praying peacefully in the forbidden section.

Under Saudi leadership, the Islamic Center has marginalized voices of moderation by shutting other Muslim countries out of running the center. I know this because since August 2006, I have been counsel in numerous legal proceedings involving the center. In that capacity I have seen all the documents regarding its funding since the late 1990s, including financial records and board minutes.

Although the board replaced the imam in 1983, it did not decide until 1984 to fill the position of director, which the center’s bylaws require to be held by a “Muslim scholar with considerable fame” who has “lecture[d] in Islamic studies.”

The board allowed Saudi Arabia to name Abdullah M. Khouj, whose curriculum vitae described him as a senior officer of the Muslim World League, a Saudi-financed organization with a goal of spreading Wahhabism. Khouj had no scholarly credentials, nor did he have a diplomatic background. Yet the United States granted Khouj a diplomatic visa, enabling the Saudis to pay him over $120,000 a year tax-free.

In 1985 the Saudis replaced the board’s treasurer with Prince Mohamad Bin-Faisal, director of the religious section in the Saudi embassy in Washington. Mr. Khouj then removed the center’s accountant, thus assuming total financial control of the institution, which he has maintained ever since. Next, he dismissed the center’s imam and consolidated that authority with his position as director, just as Imam Rauf had done a decade before. Yet this time the power grab represented only Saudi Arabia, not the diverse group of Islamic countries of the 1970s.

On paper, the board governs almost every aspect of the center’s administrative and financial functions, but the Saudis circumvented this governance structure. First, Mr. Khouj opened a personal checking account, through which the Saudi government wrote checks in his name for approximately $500,000 per year. Mr. Khouj alone approved all the center’s expenses; the board was not even informed that the account existed.

For 15 years, the center’s board never met. Then, in 1999, the Saudis called a meeting to turn control of the center over to the Muslim World League. Fortunately, a number of moderate Islamic countries, including Egypt and Oman, saw this coming and thwarted the maneuver by forcing a postponement on the pretext that they wanted “additional information.”

Mr. Khouj complied so faithfully with the Saudis’ requests to bring Wahhabist radicals — including Timimi — to teach at the center that in 2004 they planned to promote him to ambassador to South Africa. To succeed Khouj as imam, the Saudis wanted to appoint the controversial Ahmad Saifuddin Turkistani, former director of the Institute of Islamic and Arab Sciences in America (IIASA). In a 2002 report, the Foundation for Defense of Democracies cited IIASA as the largest source of Saudi hate literature in the Washington metropolitan area.

So the Saudis convened the center’s second board meeting in 20 years. Once again the board indirectly blocked the Saudis’ maneuver, by declaring that it must approve any new director. The devil they knew, Mr. Khouj, remained.

Yet the Saudis continue to run the center with an iron hand and a generous checkbook. For political or cultural reasons, or both, other Muslim countries will not directly confront them or expose their machinations.

In September 2008, the Washington Post Sunday Magazine quoted Amin Kakeh, one of Khouj’s “teachers” at the center, castigating the secretary of state for her purported response to a Palestinian blast that opened a border fence: “When the gate opened to Egypt for Palestinians, Condoleezza Rice picked up the phone and said: ‘Close the gate, we want them to die!’”

Of Washington’s heightened airport security measures, Kakeh complained, “They want to see Victoria’s Secret products. That’s the reason they are running after the female Muslim. They want to see their underwear.” And on Islamic justice, he added, “If Allah says in Court you should cut off his hand, some people say it’s too extreme. Why? Are you saying Allah is too harsh?”

No one in Washington blinked. The Saudis have financially occupied the Washington Islamic Center for a quarter of a century, but this remains a well-kept secret. No one protests, or even mentions it. Not other Muslim countries, which would gain much from a vibrant and inclusive Islamic Center; not the White House, which will always desire a close relationship with Saudi Arabia; and not reporters, who fear saying anything that might be politically incorrect.

This universal silence about the Saudis’ financial and ideological control of the center is a disservice to those Muslims who truly desire a moderate, respectful house of worship, not a place to foment Wahhabism. How do we know the difference? Follow the money . . .

— Victoria Toensing is a partner in the Washington law firm diGenova and Toensing, and a board member of the Foundation for Defense of Democracies.
Posted by jtf at 8:01 AM