The Problem of Honor Killings

A recent report by Robert Fisk in the Independent on the subject of honor killings throughout the world should highlight the need to address the prevalence of this barbaric custom.[1] 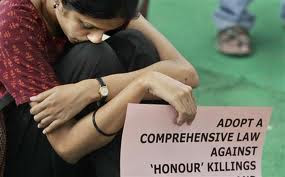 Fisk notes that many women's rights groups suspect that the number of victims of honor killings may be four times higher than the UN's "latest world figure of around 5000 deaths a year." Meanwhile, "Amnesty International and news archives suggest that the slaughter of the innocent for "dishonouring" their families is increasing by the year." Moreover, whilst the practice is known to occur amongst Hindus and Sikhs in South Asia and the West, as well as amongst Christians and other minorities in the Middle East, it is still largely confined to Muslim communities in countries such as Iraq, Jordan, Pakistan and Turkey. However, the custom may be equally widespread in Egypt and the Gulf states, where media freedom on the issue is much more restricted.

Of course, the concept of honor killings predates most religions and ultimately has cultural and tribal roots. For example, ancient Assyrian law allowed a father to punish his daughter, if she had been raped, in any manner he wanted. Nevertheless, the question arises of why honor killings are today more prevalent in the Muslim world and amongst Muslim communities in the West. From Muslim advocacy groups and spokespersons, one has the impression that they have nothing to do with Islam. For instance, after the murder of Canadian teenager Aqsa Parvez by her father and brother for refusing to wear the hijab, Sheila Musaji wrote in the American Muslim that "although this certainly is a case of domestic violence ... 'honor' killings are not only a Muslim problem, and there is no 'honor' involved." Similarly, Mohamed Elmasry of the Canadian Islamic Congress declared: "I don't want the public to think that this is an Islamic issue or an immigrant issue. It is a teenager issue."

Contrary to such denialism, though, the evidence illustrates that Islamic orthodoxy generally condones the practice, whilst not explicitly recommending it per se. The most egregious case in point is the Umdat Al-Salik ("Reliance of the Sojourner" in Arabic), a manual on Shari'a (Islamic law) certified by Al-Azhar University, the most prominent and authoritative institute of Islamic jurisprudence in the world, as a reliable guide to orthodox Sunni Islam.

The manual states (01.1-2) that "retaliation is obligatory against anyone who kills a human being purely intentionally and without right," except when "a father or mother (or their fathers or mothers)" kills his or her "offspring, or offspring's offspring." Hence, according to this view a parent, who murders his or her son/daughter for the sake of "honor," whether owing to issues of chastity, apostasy and the like, incurs no penalty under Shari'a. This ruling is derived from a hadith (Sahih Muslim, Book 19, Number 4457) where it is affirmed that one should not kill a child unless one could know "what Khadir had known about the child he killed." Khadir is a figure featured in the Qur'an who accompanies Moses on a journey and kills a son of believing parents for fear that he would rebel against the will of God (18:74 and 18:80-81).

It is for these reasons that Islamic religious authorities have often been reluctant at best to condemn the custom of honor killings. In fact, in 2003 the Jordanian Parliament voted against a bill to introduce harsher legal penalties for honor killings on the grounds that it would violate "religious traditions." Likewise, with regards to the killing of Rand Abdel-Qader, a 17 year-old Iraqi who allegedly loved a British soldier stationed in Basra, by her father, an Iraqi sergeant pointed out that "not much can be done when we have an 'honor killing' case. You are in a Muslim society and women should live under religious laws."[2]

An appropriate but not exact analogy is the problem of female circumcision in Egypt, which dates back to Pharaonic times. Though banned in 1997 by the Supreme Constitutional Court, a 2005 study found that 95% of Egyptian women had been subjected to some form of female circumcision, for the Shafi'i school of Islamic jurisprudence, dominant in Egypt, rules that trimming the clitoral hood is mandatory, and accordingly the ritual is still condoned and recommended by many Muslim clerics.

Therefore, it is incumbent on human rights organizations working in the Muslim world to put pressure on Islamic religious authorities to denounce unequivocally the practice of honor killings, discuss openly and honestly the religious basis that condones the custom, and work to formulate a reformed interpretation of core Islamic texts that teaches why honor killings are wrong from a religious viewpoint, all of which will end impediments to introducing stricter legal punishments for honor killings in Muslim countries. Similarly, women's rights groups based in the West should encourage Muslim advocacy groups and religious leaders who serve Muslim communities in the West to do the same. Furthermore, as Phyllis Chesler points out, in the U.S. "a regular shelter for battered women does not specialize in honor killings, nor are there any provisions for foster families-Muslim or otherwise-who can protect girls targeted for murder by their biological families." [3] These are gaps that must be filled.

By adopting such measures, it does not follow that honor killings will vanish overnight, but at least the number of cases will be reduced substantially.


Aymenn Jawad Al-Tamimi is an intern at the Middle East Forum.

Anonymous said...
This comment has been removed by a blog administrator.
8:03 AM

Hey everybody. This appears like a truly friendly discussion board, I hope you do not mind me prompting a question. Essentially, I aspire to be a CNA and am trying to find counseling.

I think that the fastest way for me to go about this is to look into being a CNA - I chatted to most of them when my mommy was in for surgical procedure last year.

I'm aware it is not the best stunning role within the world, still that doesn't intimidate me one bit because I feel the work they do is necessary and undervalued.

So I choose to walk into [url=http://solomon28maldon.insanejournal.com/391.html]cna training[/url] anytime feasible - what do you fellas assume is the very best approach to accomplish this? I'd personally appreciate your genuine thoughts and opinions.