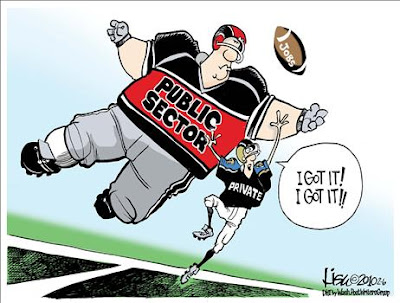 Only 6 percent of Americans believe the stimulus bill passed a year ago this week has created jobs, a CBS News/New York Times poll reported last week. Six percent. Nearly six times as many Americans believe in ghosts as believe President Obama's jobs claims. It isn't hard to see why. All you have to do is go to the government's own website, www.recovery.gov, and look at the numbers. The site reports 1.2 million jobs funded by the stimulus bill by the end of 2009. Note the terminology. That's jobs funded, not created. The administration switched from jobs "created or saved" to jobs "funded" for accuracy's sake. Or maybe to stop the mockery. Either way, it's a telling methodology.

President Obama would have us believe that the stimulus is working because the government spent a bunch of money, and that money funded 1.2 million jobs. And he has the nerve to complain that dividing the number of jobs funded into the amount spent to come up with a price per job is simplistic.

If creating jobs were that easy, the government could simply tax the country into endless prosperity. But the money has to come from somewhere. For the stimulus bill, it was borrowed. That borrowing, combined with the rest of the massive government debt-taking in the past year, has left less money available for investors. Which means fewer jobs funded by the private sector than otherwise would have been.

They also seem to understand that there is a big difference between a permanent private-sector job and a temporary stimulus job. Recovery.gov reports that of the 634,000 stimulus jobs funded from Feb. 17 to Oct. 1, 2009, 601,000 were funded by grants. The largest grant recipient was the Governor's Office of Planning and Research in Sacramento, Calif. The second-largest was the Executive Office of the State of Washington. The third largest was "New York, State of." Go down the list. They're almost all state offices.

The bulk of the stimulus money was given to governors to spend on shoring up their state budgets. That money went primarily to employ government workers. A small fraction went to vendors.

The fraction of stimulus funds that were contracts, not grants, and went to "shovel-ready" projects went, of course, to short-term construction projects. When those projects are done, those jobs will cease to exist. The same can be said for many of the government jobs funded this past year. Many school districts, for instance, have already burned through their stimulus money. A lot of teachers will get pink slips this spring.

Much of the stimulus amounted to a "cash for clunkers" for jobs. "Cash for clunkers" basically moved car purchases from the future to last summer, meaning it delayed many auto industry layoffs. The stimulus bill moved the date of a lot of other layoffs. Instead of coming last year, they'll come this year.

So even though the Obama administration can point to specific jobs and say they were funded by the stimulus spending, it cannot say the jobs are permanent, or that the stimulus was the most effective way to create the largest number of jobs.

If the American people don't believe the stimulus bill created jobs, it's not just because of the inflated numbers in early reports of jobs "created or saved" last year. It's because the very idea of politicians creating lasting economic strength by borrowing $787 billion and doling it out to other politicians is simply preposterous. Even more preposterous than ghosts.

- Andrew Cline is editorial page editor of the New Hampshire Union Leader.
Posted by jtf at 7:50 AM