The New, Upside-Down War on Terror 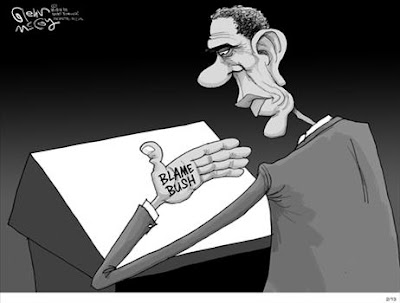 Is there any logic in the confusion of the Obama administration's actions and statements on fighting the war on terror?

On the one hand, we had a two-year campaign (2007–08) of damning the Bush protocols, from renditions and military tribunals to Guantanamo and Predator strikes. Then, the Obama administration unleashed Eric Holder and John Brennan, who in highly partisan fashion attacked the anti-terrorism policies implemented from 2001–08 and reflected the themes voiced by Obama himself in his al-Arabiya interview and Cairo speech, many of which were reified by the Mirandizing of the Christmas Day bomber and the announced civilian trial of KSM in New York.

But all that said, Obama never shut down Guantanamo; has not tried KSM in New York; has kept the wiretaps, intercepts, renditions, and tribunals he once castigated; has escalated the war in Afghanistan; and has kept the status-of-forces agreements that Bush negotiated with the Iraqis — and Joe Biden now claims that Bush's Iraq agreements were Obama's greatest success!

Most importantly, Obama has vastly increased the Predator assassination missions along the Afghan-Pakistani border. If one were to sort out the politics of all this, one would conclude that Obama's cynical strategy looked something like this:

1) Run against Bush as the candidate of the Democratic party's hard-Left, anti-war, pro-ACLU base.

2) When elected, pacify that same base with soaring multicultural-outreach rhetoric of the Cairo sort and grand gestures, such as promising to close Guantanamo, investigate former CIA interrogators, appoint a Muslim-American liaison to the Islamic world, and end waterboarding.

3) Meanwhile, up the fighting in Afghanistan and the Predator assassination missions to prevent another 9/11-style attack.

a) Obama really does (privately) believe that radical Islamists wish to kill us, and apparently has decided the only effective means of combating them is to copy the Bush strategy but drop the "smoke 'em out" rhetoric and substitute hope-and-change therapeutic banalities as we blow up suspected killers. The more conservatives rail about the KSM trial, the more Obama gains trust with the Left, and the more he can keep quietly killing suspected terrorists in Waziristan. (Dead men need no Miranda rights.)

b) So at home, Obama's calculation is even more cynical: He assumes that left-wing hatred of Bush's war on terror was never principled, but was always about partisan politics, and that left-wingers were far "angrier" about Bush's waterboarding of three admitted terrorists than they ever will be about Obama's assassinating suspected terrorists along the Afghan-Pakistani border.

c) Conservatives are then supposedly put in a bind: They may be angry that Obama demagogued the issue for two years as a candidate, and they may be upset that he so brazenly reversed course and emulated what he had demonized, and they may be mad about the hypocrisy of the hard Left — but they are also relieved that Obama is fighting terror and killing terrorists, and might even be impressed that he is doing so as a Nobel Peace laureate immune from the criticism that nearly destroyed Bush, and as someone who quietly executes suspected terrorists by remote control but worries publicly about confessed detainees in Bush's gulag.

I think that sums up the present Obama policy, which is far more cynical than confusing. I have no idea whether it is sustainable.