Believing you can run other peoples’ lives when you can barely run your own. 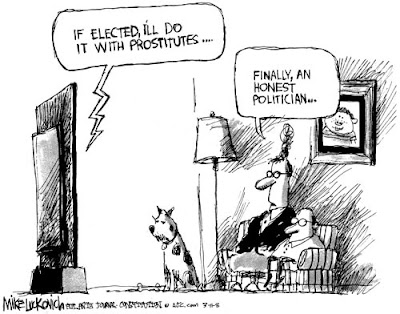 I think I’ve had my fill of moral hypocrisy. We routinely hear stories of evangelical ministers who “mentor” hookers at $500 an hour, “family values” politicians who like the cut of a congressional page’s jib, or senators who love to press the flesh, one bathroom stall at a time. And, given the times, we increasingly hear stories about progressive politicians and columnists who — gasp! — have bigger carbon footprints than they want the rest of us to have: CO2 emissions for me and not for thee! For shame.

The press loves stories of moral hypocrisy. Catching a finger-wagging politician violating his or her own moral code warms the cockles of every reporter’s heart. Indeed, sometimes journalists confuse hypocrisy for the real crime. “If a politician murders his mother,” the late Washington Post editorial page editor Meg Greenfield once said, “the first response of the press . . . will likely be not that it was a terrible thing to do, but rather that in a statement made six years before, he had gone on record as being opposed to matricide.”

The crusade against moral hypocrisy necessarily hits conservatives harder, not because conservatives are more immoral, but because they uphold morality more publicly, making them richer targets. The Left aims much of its moralizing at moralizing itself — “thou shalt not judge.” Meanwhile, the Right focuses on the oldies but goodies — adultery, drug use, etc. I think we’re right to uphold a standard even if we sometimes fail to live up to it.

I know many smart liberals for whom no idea is too complex, no concept or organizational flow chart too hard to grasp. They want government to take over this, run that, manage some other things, and in all cases put people exactly like them in charge of pretty much everything. Many are geniuses, with SAT scores so high you could get a bloody nose just looking at them.

But you wouldn’t ask one to run a car wash.

The chairman of a small college’s English department thinks it’s obvious intellectuals should take over health care, but he can’t manage the class schedules of three professors or run a meeting without it coming to blows or tears. A pundit defends government intervention in almost every sphere of economic life, but he can’t figure out how to manage the interns or his checking account.

The most famous story of an intellectual hypocrite getting his comeuppance is the tale of George McGovern and his inn. The senator, 1972 presidential nominee and college professor thought he could run a vast, technologically sophisticated nation with a diverse population and an entrepreneurial culture. Then, after leaving Washington, he bought an inn in Connecticut to while away his retirement years. For a guy as smart as him, running an inn should have been child’s play. But it went belly-up before the end of the year, with a contritely befuddled McGovern marveling at how much harder running a business was than he thought.

Or consider Rep. Charles Rangel (D., N.Y.), currently subject of a House ethics investigation. Rangel heads the Ways and Means Committee, which writes the tax code. He backs the imposition of an income-tax surcharge on high earners to pay for health care, calling it “the moral thing to do.” Yet he can’t seem to figure out how to file his own taxes properly or, perhaps, legally.

Now, I also know lots of conservatives who are basket cases at everything other than reading and writing books and articles, giving speeches, and thinking Big Thoughts (likewise, I know liberals who despise conservative moralizing about sex and religion who nonetheless live chaste, pious lives themselves). The point is that conservatives don’t presume to be smart enough to run everything, because conservative dogma takes it as an article of faith that no one can be that smart.

Moral hypocrisy is still worth exposing, I guess. But we are living in a moment when revealing intellectual hypocrisy should take precedence. A J. P. Morgan chart reprinted on the “Enterprise Blog” shows that less than 10 percent of President Obama’s cabinet has private-sector experience, the least of any cabinet in a century. From the stimulus to health-care reform and cap-and-trade, Washington is now run by people who think they know how to run everything, when in reality they can barely run anything.