Alex Ovechkin should slow down and live. If he can.

Athletes in many sports use the same expression for someone who plays with a reckless abandon that borders on self-destruction: "He plays like he's using somebody else's body." It's meant as a compliment to courage, but there's also an overtone of disaster.

Suddenly this season, his fifth in the NHL, two-time MVP Ovechkin is discovering that it really is his own body, not some Cyborg rental unit, that he's using as a blunt instrument to bash everybody in sight. Usually within the rules, but sometimes -- and too often recently -- outside them. 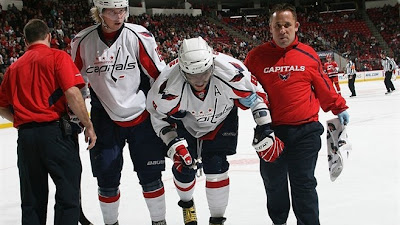 Washington's Alex Ovechkin is helped off the ice after injuring his knee on Monday.

On Tuesday, the news was fairly good. Ovechkin skated briefly at the Capitals' practice rink after a knee-to-knee hit Monday night that, in addition to getting him an ejection and game-misconduct penalty, looked like it could have been a serious injury. On slow-motion replays, his knee clearly buckled sideways. But it held. This time.

So, Ovechkin's knee will get better, just like the shoulder injury that sidelined him six games earlier this season. Are these just warning shots from Mother Nature? What's clear is, at 24, Ovie is no longer indestructible, even if he thinks he is. The time has come for him to evaluate how he will play the rest of his career.

We know his view. After being ejected just three games ago when he ran Patrick Kaleta face-first into the glass, Ovechkin said of his all-aggression, all-the-time style: "I can't do nothing about it. I just play my game. It's not going to change. It's me."

Ovechkin is all of a piece -- a live-on-the-edge outlier. What looks like excessive violence to others may look like a thrill or a challenge to him. His $300,000 Black Series AMG Mercedes -- the one with the AOGR8 license plate -- is a "supercar" with 12 cylinders, two turbo chargers and 700 horsepower. It can go 200 mph. He's had his other cars customized so they can go faster. In an ESPN feature piece, he appeared to take the reporter from zero-to-warp-speed in about four seconds.

"We are a little worried about his driving habits," Caps General Manager George McPhee said at the time.

So, sympathize with the Caps' front office. Fear for Ovechkin himself. But also appreciate that his teammates adore this break-neck style and wouldn't change him for the world. Whether scoring a goal or stalking a foe to blow up at full speed, Mr. Chaos creates space and opportunity for others, inspires teammates and excites the crowd.

Yet everything has its limits. And Ovechkin is at or past the edge. On Tuesday, the NHL suspended him for two games for his knee-to-knee collision with Carolina's Tim Gleason, his second five-minute-major hit within a week.

"He's pretty reckless," Coach Bruce Boudreau told reporters. "It's hard telling a guy that scores 60 goals a year to change the way he plays. At the same time, I don't want to see him getting hurt. Maybe he has to pick his spots a little better."

Would the Caps talk to Ovechkin about toning down a bit? "As a coach, and someone who admires him, I just don't want to see him put himself in harm's way. So, we'll see," Boudreau said. "I don't think anything said is going to change the way he plays."

In all sports, the star that's a compulsive risk-taker is begged to realize, "You are too valuable to take so many chances. Don't stop. Just rein it in." Most can, to a degree. Some can't, or won't.

If Ovechkin is the latter, then we should take a good look at the Great Eight while he's still in one piece and at the peak of his powers. Maybe, like Gordie Howe, Ovechkin will combine goals and big hits for a full career. But in the last few weeks, the opposite outcome has emerged for the first time. If he keeps playing at the edge and in constant pursuit of a hit that tops all his other highlight clips, can Ovechkin still have a 60-goal body by the time the Caps run at a Stanley Cup?

While Washington worries about his health, the events of the last week have refocused discussion on whether Ovechkin is a dirty player. At the extremes, in Pittsburgh, he's called a gifted goon, coddled by the sport's hierarchy. In D.C., he's the pinnacle of toughness. Everybody else is just jealous they don't have him.

If you review the tapes of his most controversial hits -- not just Gleason and Kaleta in the last week but Sergei Gonchar, Dennis Wideman, Rich Peverley, Daniel Briere, Jamie Heward, Dustin Brown, Evgeni Malkin and others -- it does seem that Ovechkin has entered a worrisome gray area. What is most gripping about his hits is that his premise seems to be: Wow, what a chance for an amazing collision! He may get hurt, I won't.

No great athlete in any sport plays more wildly, with less regard for injury, to himself or his foe, than Alex Ovechkin right now.

If he could turn his aggression down just a notch, he would be just as great but have a longer career that is even more admirable.

That doesn't sound like much. And to some it isn't. But to others, it's impossible. The way they play is who they are, right down to the bone.

If Ovechkin, all 700 horsepower, can't find a way to downshift, we'll just have to cross our fingers. Every night, every shift, he's going on all 12 cylinders, running in the red. That's why we love to watch him. From now on, it's also why we'll hold our breath.
Posted by jtf at 8:53 AM