Groupthink and the Global-Warming Industry 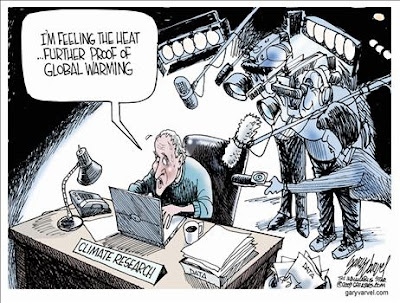 By now you might have heard something about the scandal rocking the climate-change industry, though you can be forgiven if you haven’t, since it hasn’t gotten nearly the coverage it should. Computer hackers broke into the Climatic Research Unit at the University of East Anglia in England and downloaded thousands of e-mails and other documents. The CRU is one of the world’s leading global-warming data hubs, providing much of the number-crunching that global policymakers need on climate change. And, boy, can they crunch numbers.

In a long string of embarrassing e-mail exchanges, CRU scientists discuss with friendly outside colleagues, including Penn State University’s Michael Mann, how to manipulate the data they want to show the world, and how to hide the often-flawed data they don’t. In one exchange, they discuss the “trick” of how to “hide the decline” in global temperatures since the 1960s. Again and again, the researchers don’t object to just inconvenient truths but also inconvenient truth-tellers. They contemplate and orchestrate efforts to purge scientists and journals who won’t sing from the same global-warming hymnal.

In one instance, Phil Jones, the CRU director, says a scientific journal must “rid (itself) of this troublesome editor,” who happened to publish a problematic paper. In another, Jones says we “will keep them out somehow — even if we have to redefine what the peer-review literature is!”

These documents reveal the trick behind how they hide the dissent. Climate-change activists often dismiss critics by noting that the skeptics haven’t offered their arguments in peer-reviewed literature. Hence why they work so hard to keep dissenters out of the literature! Indeed, whatever the final verdict on the CRU’s shenanigans, two things are already firmly established by even a sympathetic reading of these documents.

First, the climate-change industry is shot through with groupthink (or what climate scientist Judith Curry calls “climate tribalism”). Activists would have us believe that the overwhelming majority of “real” scientists agree with them while the few dissenters are all either crazed or greedy “deniers” akin to flat-earthers and creationists. These e-mails show that what’s really at work is a very large clique of scientists attempting to excommunicate perceived heretics for reasons that have more to do with psychology and sociology than physics or climatology.

Second, the climate industry really is an industry. Climate scientists make their money and careers from government, academia, the United Nations, and foundations. The grantors want the grantees to confirm the global-warming “consensus.” The tenure and peer-review processes likewise hinge on conformity. That doesn’t necessarily mean climate change isn’t happening, but it does mean sloppiness and bias are unavoidable.

How big a scandal this is for the scientific community is being hotly debated on the Internet. But in big newspapers and TV news, the story has gotten less attention. And that’s a scandal, too. The New York Times’s leading climate reporter, Andrew Revkin (whose name appears in some of the e-mails), won’t publish the contents of the e-mail on the grounds it would violate the scientists’ privacy. Can anyone imagine the Times being so prissy if such damning e-mails were from ExxonMobil, never mind Dick Cheney?

Indeed, the closer you look at the scandal, the more you realize it’s all one big outrage. The same journalistic tribalism that allowed Dan Rather to destroy his career over “Memogate” keeps reinforcing itself. Rather picked sources who said what he wanted to hear, then he reported what they said as if it were indisputable. The same thing is happening on climate change. Ideological bias is a major factor in the news media’s work as a transmission belt for the climate industry. But part of the problem is also that the journalists do a bad job when the majority of “respected” experts agree on anything complicated. For instance, it was pretty impossible for reporters to independently investigate whether Saddam Hussein had WMDs, and since the most established authorities agreed he had to have them, the news media reported the consensus, which turned out to be wrong.

Likewise, most journalists aren’t qualified or capable of working through the climate data. So they opt for the consensus. But there are important differences, too. While there’s often reason for governments to hide classified intelligence, there’s no reason for climate data to be classified. If the science is a slam dunk, why are CRU researchers keen on hiding their research? After the WMD fiasco, journalists agonized over their mistakes. Why no soul-searching over the CRU fiasco? Climate change hasn’t been “debunked” by these documents. But the integrity of the “consensus” has been.

Also, keep in mind that the stakes are higher. In Copenhagen this month, the U.S. government will try to join the global bandwagon to spend trillions in fighting climate change. That money will not only enrich corporations, weaken U.S. sovereignty, and hinder global growth, it will come out of funds that could be spent on fighting disease and poverty. Surely that’s worth some journalistic skepticism?