Switzerland Says “No” to the Bayonets of Islam

The Swiss people went to the polls today in a referendum on the banning of minarets in Switzerland.

By the time they voted, they were well aware of the stakes in the issue. If they voted to approve the minaret ban, they would certify themselves as “racists” and “xenophobes”. They would show that hate and intolerance had won. They would be identified as worthy heirs of the Third Reich.

Yet, despite all of that, despite the pariah status that awaited them, the Swiss people voted overwhelmingly to approve the minaret ban.

So what happens next? What can the “world community” do to teach Switzerland a lesson? 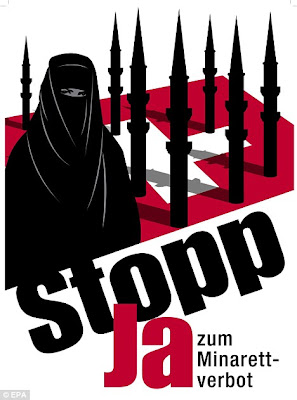 If it were a member of the European Union, the solution would be easy. The example of Austria a few years back shows how the EU handles a member state whose internal politics violate the sensibilities of the bien-pensants in Brussels.

But Switzerland is a tougher nut to crack. Will the OIC call on its member states to boycott cuckoo clocks and watches? Will the jet set give up their skiing holidays in Switzerland? Will the rich and powerful close their numbered Swiss bank accounts and put their money elsewhere?

In any case, the Swiss people have made their opinion clear. According to AFP:

GENEVA — Switzerland on Sunday voted to impose a blanket ban on the building of minarets across the country, backing an initiative by far-right politicians.

A clear majority of 57.5 percent of the population and 22 out of 26 cantons voted to ban the towers or turrets attached on mosques from where Muslims are called to prayer.

Far-right politicians celebrated the results, while the government sought to assure the Muslim minority that a ban on minarets was “not a rejection of the Muslim community, religion or culture.”

The Swiss People’s Party (SVP) — Switzerland’s biggest party — had forced a referendum under Swiss regulations on the issue after collecting 100,000 signatures within 18 months from eligible voters.

Having won a double majority — both in terms of cantons and absolute numbers, the initiative will now be inscribed in the country’s constitution.

“The Federal Council (government) respects this decision. Consequently the construction of new minarets in Switzerland is no longer permitted,” said the government, which had firmly opposed the ban, in a statement.

“These concerns have to be taken seriously… However, the Federal Council takes the view that a ban on the construction of new minarets is not a feasible means of countering extremist tendencies,” she stressed.

She also sought to reassure the Muslim population, saying: “Today’s popular decision is only directed against the construction of new minarets.

“It is not a rejection of the Muslim community, religion or culture. Of that, the Federal Council gives its assurance.”

But the Muslim community, which makes up 400,000 out of 7.5 million people in Switzerland, was dismayed.

“The most painful for us is not the minaret ban, but the symbol sent by this vote. Muslims do not feel accepted as a religious community,” said Farhad Afshar, who heads the Coordination of Islamic Organisations in Switzerland.

The Christian community also expressed dismay, saying it was “inadmissible that the religious minority now have to subject to unequal treatment.”

For Amnesty International, the minaret ban is a “violation of religious freedom, incompatible with the conventions signed by Switzerland.”

“The initiators (of the referendum) have unfortunately managed to exploit fears towards Islam and stirred up xenophobic sentiments, it’s regrettable,” said Daniel Bolomey, who heads the Swiss chapter of the rights group.

Meanwhile, SVP Vice-President Yvan Perrin cheered the fact that his party had won the vote “without difficulty.”

He told Radio Suisse Romande that Swiss companies should not worry about suffering from a possible backlash from Muslim countries.

“If our companies continue to make good quality products, they have nothing to worry about,” he said.

Noting that the Swiss had made their decision after fervent debate on the issue, he said: “We won respectably.”
Posted by jtf at 11:21 AM

Anonymous said...
This comment has been removed by a blog administrator.
3:10 PM