Ninjas slash as slash can 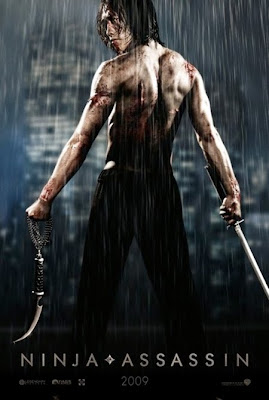 Not to brag, but who is this "Ninja Assassin" fellow compared to me? He: gets sliced to the bone by whirling blades, is blasted unconscious by stun guns and does handstands on a bed of nails. I: sat through "Old Dogs."

Korean pop singer Rain plays Raizo, a child raised in the world's coolest orphanage: Chores include learning to maim and slash the other children, who are being raised to be ninja assassins by their dark master Lord Ozunu. These orphans don't beg, unless it's to say, "Please, sir, I want some more whoop-ass."

Despite all this happy carnage -- the arterial spray throughout is of lawn-sprinkler force, and many a wall exists only to get Jackson Pollocked with bright red viscous goo -- Raizo comes to doubt his brethren. The outfit considers membership to be nonrevocable, though, and sends dedicated field representatives out to explore the possibility of carving Raizo into Raisinets, if possible while inflicting extravagant doses of pain.

The evil ninjas seem to be unaware of exactly who it is they are dealing with: Raizo once spent a year training blindfolded, which is exactly how I wish I had seen "Old Dogs." He also devises an ingenious way to fend off a ninja kill technique disguised as clean laundry.

Meanwhile, in Berlin, a police forensics analyst (Naomie Harris) begins looking into a network of something or other involving a trail of yada yada that leads wherever. Her group, Europol, goes after the ninjas, including Raizo, but one cop makes a big mistake when he brazenly refers to the ninjas as "a few whack jobs wearing pajamas." No, that's conservative bloggers.

Europol becomes a target of the rest of the Ozunus, who can't allow anyone to jump the queue when it comes to torturing Raizo. The forensics expert, though, joins forces with Raizo after receiving a warning letter containing the evil ninjas' trademark black sand.

I can tell her that an invitation to attend a screening of a new Disney movie that stars Robin Williams would have been equally unsettling.

"Ninja Assassin," which is bloodier than peak hour at the abattoir, offers about 2½ films' worth of roaring action -- Raizo is so handy with a chain that surrounding ninjas fall like dandelions against a weed whacker -- played with an earnest B-movie fervor. Despite the pace, though -- pedal, have you met my friend metal? -- "Ninja Assassin" still has some of its best stuff left at the end, when the master returns to demonstrate his extra-special, super-most-deadliest technique. This movie knows exactly what it is: Gonzo silliness about bodies turned into human salsa. 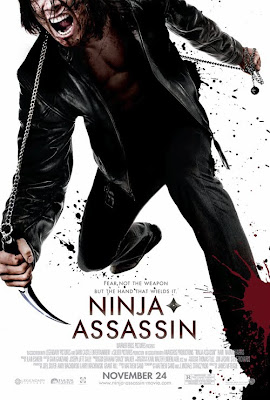 Chances are if you're willingly walking into a movie entitled "Ninja Assassin," you're expecting to see three basic things: 1) ninjas, 2) lots of them, 3) fighting each other with all sorts of cool weapons your parents never would let you own.

It's a pleasure to report, then, that this contemporary chopsocky feature, produced by the Wachowski brothers and directed by James McTeigue ("V for Vendetta"), delivers on those essential elements. It is indeed filled with lots of ninjas who are constantly at each other's throats with all manner of sharp implements.

The film is likely to enjoy only a modest run in theaters, but its chances at a successful home entertainment afterlife seem strong.

Made for the relatively modest price tag of $50 million, "Ninja" often appears as if it cost twice that, thanks to its lush visuals (lensed by Karl Walter Lindenlaub) and terrific special effects, pulled off with a combination of practical and digital tricks. In terms of narrative, though, it's a B-picture all the way.

The somewhat jumbled story line centers on Raizo (South Korean pop singer Rain), a skilled warrior raised from an early age to be a foot soldier in a secret army of ninja assassins. But after his brutal master kills the girl he loves, Raizo goes rogue and wages war on his former employers with the help of an Interpol agent (Naomie Harris) investigating this shadowy world of sword-wielding hitmen.

A plot this thin requires charismatic actors to give the proceedings any dramatic weight. Unfortunately, that's the primary area where "Ninja" falls short. Rain might be a superstar in concert, but he's not very interesting onscreen. Granted, the serviceable screenplay by Matthew Sand and J. Michael Straczynski only gives him glum angst to play, but his perpetual blank stare doesn't suggest much range.

It's also a shame to see Harris, who had such a steely, badass presence in her breakthrough role in "28 Days Later," stuck playing the out-of-her-depth sidekick.

Where the movie excels is the action sequences, largely because McTeigue takes full advantage of his R rating to indulge in lots of blood-soaked slicing-and-dicing, while displaying a sense of humor the rest of the film lacks.

In typical Wachowski fashion, these set pieces embrace both comic book and video game aesthetics: The frames are carefully composed and packed with rich colors, but the camera is rarely locked down, toggling around the space as if McTeigue were controlling it with a joystick. This approach might upset old-school kung fu movie fans, but it results in some of the most entertaining and over-the-top martial arts action this side of the "Kill Bill" films.

"Ninja" isn't a great movie, but if you're in the right frame of mind, it is a bloody good time.