‘Mad Men’ Strains to Stay as Button-Down as Ever 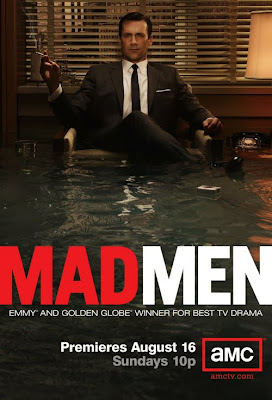 Retrospective winks at past ignorance are what makes “Mad Men” so funny and, at times, so chilling.

“Mad Men” mocks and celebrates forbidden vices, the drinking, smoking and promiscuity that in the advertising business of the 1960s flowed heedlessly, without health warnings or the sour taint of political incorrectness. From the start, the show has mined hindsight for wicked humor: a child playing dangerously with a dry-cleaning bag is chided only for messing up the clothes inside; a pastoral family picnic ends with the mom tossing the entire basket of trash onto lush, pristine park grounds; the presidential candidate Richard M. Nixon is marketed as a young, handsome Navy hero.

Even more than in the first two years, this new season, which begins on Sunday on AMC, stresses the less amusing side of that innocence, leading viewers to look back, aghast at, and enthralled by, a world so familiar and so primitive. Characters on “Mad Men” struggle in shame and secrecy with the very things that today are openly, incessantly boasted and blogged about: humble roots, broken homes, homosexuality, unwed motherhood, caring for senile parents.

In the early ’60s space was for conquest; the social order was overripe for exploration. And in this age before chat rooms, support groups, confessional talk shows, self-help books and 24-hour hot lines became commonplace, each crisis, from the Cuban missile to the midlife, seems encountered as if for the first time, uncharted and befogged by bewilderment and fear.

It’s not just that everyone has a secret; each character feels so alone in guarding it.

The first episode begins with the show’s star ad man, Don Draper (Jon Hamm), at a stove, heating milk, wrapped in a plaid bathrobe and haunting memories he tried to smother long ago. Staring into the darkness, Don conjures scenes of the sordid, poverty-stricken way he came into the world, images accompanied by faint, sad strains of “My Old Kentucky Home.”

Those first fugues into Don’s hidden past are not the most inviting way into a new season, however. “Mad Men” is essentially one long flashback, an artfully imagined historic re-enactment of an era when America was a soaring superpower feeling its first shivers of mortality.

In contrast, Don’s daydreams about his deprived childhood seem incongruous and hokey — less a look into his psyche than a re-creation of a comedy skit from vintage programs like “The Garry Moore Show.” Only when the camera returns to the offices of the Sterling Cooper advertising agency are things right — and deliciously wrong — in this mad world.

A British company bought the agency at the end of Season 2, and now Don and his colleagues are supervised by Lane Pryce (Jared Harris), a supercilious financial officer from the London headquarters, and his insufferably pompous male secretary, John Hooker (Ryan Cartwright), nicknamed “Moneypenny” by his American co-workers.

Peggy (Elisabeth Moss) has risen to copywriter but still can’t command the respect of her own secretary, who ignores her boss and instead moons over John’s clipped British accent. “I could listen to him read the phone book,” she says dreamily to Peggy.

“Well,” Peggy snaps. “When he gets to S, I need Howard Sullivan at Lever Brothers.”

The show’s period clothes, cocktails and allusions to Hitchcock, Bob Dylan and Frank O’Hara are no longer new. Neither are the narrative feints that spike suspense by deflecting it — though the trick continues to work. There are still mysteries to even the most closely examined lead characters. 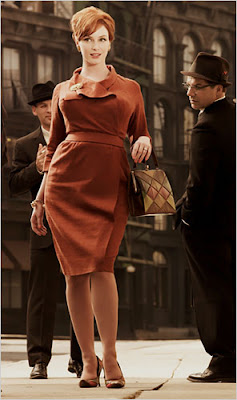 Christina Hendricks in "Mad Men" on AMC, which returns for its third season on Sunday.

Peggy; Joan (Christina Hendricks), the office manager; and even Pete (Vincent Kartheiser), the weaselly account executive, are so familiar, yet they remain enigmatic — protected by a thin, exotic veil of weirdness.

And, most of all, so does Don’s beautiful wife, Betty (January Jones), who is in the last stages of pregnancy with their third child and worried about her increasingly senile father, Gene (Ryan Cutrona). Betty is even more concerned that her brother and his wife have designs on their father’s property.

Don, an incorrigibly unfaithful husband but a loyal spouse, decides that the old man can live with them. Gene repays the hospitality by instructing his granddaughter to read aloud to him from Gibbon’s history of the fall of the Roman Empire. When Don comes home, Gene asks acidly, “How’s Babylon?”

Gene’s generation, forged by the Depression and Prohibition, finds an unlikely ally in youth, the would-be beatniks who despise their parents’ conformity and decadent consumerism and yearn for change. At Sterling Cooper change comes slowly and ambivalently; some ad men smoke marijuana and quote T. S. Eliot while fretting about nuclear war; others drink and dance the jitterbug at a Derby party at a segregated country club. Don Draper smoothly works in both worlds and belongs to neither.

At this moment in 1963, John F. Kennedy is still president; the most imminent threat of mutually assured destruction has ebbed; and Don is still restless, knowing and unknowable.

Over dinner, an eager stewardess chirps to Don about her travels. His reply is typically inscrutable. “I keep going to a lot of places and ending up somewhere I’ve already been,” he says.

It’s the third season, and we still want to go with him.