Our Road to Oceania

Orwell was on to something.

Perceived enemies are everywhere — supposedly plotting to undo the benevolent egalitarianism of Big Brother. Citizens assemble each morning to scream hatred for two minutes at pictures of the supposed public traitor Emmanuel Goldstein. The “Ministry of Truth” swears that the former official Goldstein is responsible for everything that goes wrong in Oceania. 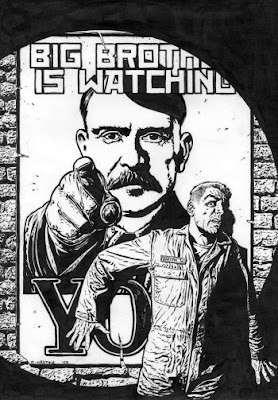 In Orwell’s Oceania, there is a compliant media that offers “Newspeak” — recycled government bulletins from the Ministry of Truth. “Doublethink” means you can believe at the same time in two opposite beliefs.

America is not Oceania, but some of this is beginning to sound a little too familiar.

We see Barack Obama’s smile broadcast 24/7, in a fashion we have not seen previously in earlier presidents. A Newsweek editor referred to Obama as a “god.” MSNBC’s Chris Matthews claimed physical ecstasy when Obama speaks. A Washington Post reporter swooned over Obama’s “chiseled pectorals.”

Former president George W. Bush — our new Emmanuel Goldstein — remains a daily target of criticism. Diplomats continue to discuss the need to hit a “reset” button that will erase the past. Last week, the president said those in the past administration caused our present problems — and so should keep quiet and get out of his way.

Bush is somehow culpable for the newly projected $2 trillion annual deficits. Bush caused the new unemployment levels to soar to nearly 10 percent. Bush’s war on terrorism failed. Bush is responsible for the most recent trouble abroad with Iran, the Middle East, North Korea, and Russia.

There are similar Big Brother attacks on recent critics of the Obama administration’s health-care initiatives. Once-praised dissent has become subversive. Protesters are a mob to be ridiculed by the government as mere health-insurance puppets. Sen. Barbara Boxer (D., Calif.), is suspicious of the nice clothes the protesters wear. Speaker of the House Nancy Pelosi (D., Calif.), used a few isolated incidents to claim that the health-care dissidents are “carrying swastikas and symbols like that” to compare Obama and Democrats to the Nazis.

At a meeting with Democratic senators, Obama’s deputy chief of staff, Jim Messina, urged them to “punch back twice as hard” against these critics, according to two people who were in the room. An official presidential website now asks informants, in Big Brother style, to send in e-mails and Internet addresses that seem “fishy” in questioning the White House health-care plans.

Doublethink is common. Presidential sermons on fiscal responsibility tip us off that deficits will soar. Borrowing an additional trillion dollars to manage health care is sold as a cost-saving measure. Racial transcendence translates into more racial-identity politics, reflected both in rhetoric and in presidential appointments.

The government wants to determine how some executives should be paid. The administration assures millions of citizens it will now intrude into everything from buying homes and cars to how they go to the doctor.

If some Americans chose to purchase a roomy gas-guzzler rather than an uncomfortable but more efficient compact car, a kindly Big Brother will now “correct” that bad decision and buy the “clunker” back. If we bought a house for too much money, the government will assure us it was not our fault and redo the mortgage. If our doctor wants to conduct a procedure, a government health board will first determine whether it is cost-effective and in the collective interest.


Despite the absence of another 9/11-like attack, we are still told by the new terrorism czar, John Brennan, that the old war was largely a Bush failure. Administration officials keep inventing euphemisms. Some have dubbed the war on terror “an overseas contingency operation.”

We were once told that military tribunals, renditions, the Patriot Act, and Predator drone attacks in Pakistan were George Bush’s assault on the Constitution rather than necessary tools to fight radical Islamic terrorists.

Not now. These policies are no longer criticized — even though they still operate more or less as they did under Bush. Guantanamo is still open, but no longer considered a gulag. The once-terrible war in Iraq disappeared off the front pages around late January of this year.

George Orwell, a man of the Left, warned us that freedom and truth are not endangered only by easily identifiable goose-stepping goons in jackboots. More often he felt that state collectivism would come from an all-powerful government — run by a charismatic egalitarian, promising to protect us from selfish, greedy reactionaries.

Orwell was on to something.


— Victor Davis Hanson is a senior fellow at the Hoover Institution and a recipient of the 2007 National Humanities Medal.