VENISSIEUX, France -- It was market day on Place Leon Sublet, the main square in this little working-class town southeast of Lyon. In the shadow of an old Catholic church, unhurried shoppers wandered the food stalls.

It could have been a portrait of France at its most traditional, except that many of the women wore robes down to their ankles and long scarves to conceal their hair.

Then along came a woman shrouded head to toe in black. Only her dark eyes were visible through a narrow slit in her veil, a portrait more reminiscent of Saudi Arabia than traditional France. 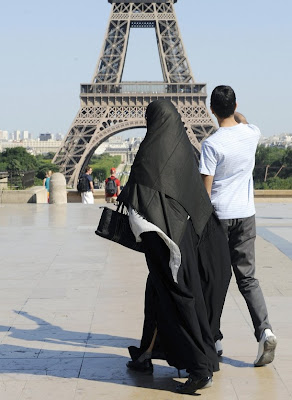 File photo of a woman wearing a niqab walking at Trocadero square near the Eiffel Tower in Paris June 24, 2009.

French people have long been accustomed to Muslim women wearing head scarves and long dresses. But the sight of women covered by black veils, increasingly frequent in some towns, has become the latest test of France's uneasy role as host to the largest Muslim population in Europe, nearly 6 million out of 64 million. Because of its stark distinction from the way European women dress, the full veil has generated a public outcry, becoming a symbol widely perceived as an assault on France's secular values.

"It's ridiculous," sneered Jose Aparecio, 66, a retired plumber surveying the busy square in Venissieux. "I don't know what they're trying to prove."

Responding to the sudden swell of concern, President Nicolas Sarkozy declared recently that "the burqa is not welcome" in France. He did not say what he would do about it, but the National Assembly, or parliament, named a commission of inquiry last month to weigh whether full-length Muslim veils should be outlawed.

The prospect of new legislation revived resentment, still lingering among Muslims here, over a legal ban enacted in 2004 against female students wearing scarves to cover their hair in public schools. Although France's main Muslim organizations have not endorsed full veils, calling them a "marginal phenomenon," they have denounced the possibility of restrictive laws as further stigmatization of Muslims trying to find a place in the French landscape.

"A very large majority of us only wish to live our religion in moderation and tolerance," Mohamed Moussaoui, head of the French Muslim Religion Council, said in a statement to Le Point magazine. "Naming a commission of inquiry corresponds to something heavy, which is normally reserved for major subjects affecting society."

Most of the outrage, particularly among Paris commentators, has centered on women's rights, based on a supposition that women who wear full veils are forced to do so by their husbands. For instance, the Council of State, France's highest administrative tribunal, upheld the government's refusal to naturalize a veiled Moroccan woman because it said her attire "clashed with the values of a democratic society and the principle of sexual equality."

But more broadly, the decision to wear a full-length veil has been interpreted as a way to defy the ideal of integration, which traditionally has underpinned France's attitude toward Muslims and other immigrants. By ostentatiously refusing to blend in, women wearing such attire have generated intense resentment among European-stock French people long uncomfortable with an unaccustomed religion in their midst.

To some extent, the resentment also has spread among Muslim immigrants, particularly the elderly, who from humble beginnings worked hard to become part of the society and now see fellow Muslims challenging their adopted values. "If they don't like it here, they can always leave," sniffed Mustafa Zemaoui, 65, a retired locksmith who was sipping on a little glass of rose wine as the lunch hour approached.

In that vein, the official High Authority Against Discrimination and for Equality ruled recently that government-sponsored, free French classes are entitled to exclude fully veiled women because, on one hand, the veil covering their mouths impeded teaching and, on the other, the classes are part of an effort to integrate immigrants into society.

Although concern has been brewing for months, the recent outcry was set off by André Gerin, who was mayor of Venissieux for 24 years and is still its member of parliament. Gerin, 63, a former autoworker and Communist Party veteran, said his experience here showed him that the veil is "the tip of an iceberg," behind which lurks a small core of Muslim fundamentalists determined to impose its ways on French society.

"There is real ideological work underway to refute the best parts of what makes up Western civilization," he said in an interview at city hall, where he maintains an office despite resigning recently as mayor.

Backed by about 90 fellow members of parliament, Gerin introduced a resolution in June asking for the commission of inquiry. With Sarkozy's comments in the background, the commission was immediately set up, scheduling hearings after the August holidays and promising to issue recommendations by the end of the year.

"The vision of these imprisoned women is already intolerable for us when they come from Iran, Afghanistan, Saudi Arabia or certain other Arab countries," the resolution said, suggesting the likely outcome of its work. "It is totally unacceptable on the soil of the French Republic."

Gerin throughout his political career has made it a point to work closely with Muslims, who make up a little more than half of Venissieux's 60,000 residents. But when he discovered in 2002 that two Venissieux youths were captured in Afghanistan and imprisoned at the U.S. military prison at Guantanamo Bay, Cuba, he said, he began to worry. Two years later, Gerin was instrumental in getting the government to expel a Muslim preacher who he said was preaching hatred of the West and "brainwashing" young Venissieux Muslims.

Public comment in France has focused on the burqa, a full veil popular in Afghanistan that allows women to see out a lacelike patch at eye level. But most fully veiled women in France have adopted the niqab from Arab countries. It leaves the eyes visible in a gap between the head covering and a separate face veil.

Whatever the term, Gerin said, the women become "walking prisons" behind their veils and, more important, are part of a campaign by hundreds of politically oriented Islamic fundamentalists to spread their views among Muslims in poor neighborhoods near the major cities of Lyon, Paris and Marseille.

The Interior Ministry's internal intelligence services estimated last month that fewer than 400 women wear the full veil in France; most are native-born citizens and some are recent converts. The decision to adopt such garb, the ministry's analysts said, often arises from a desire to provoke French society rather than submission to husbands or fathers.

Gerin disputes the ministry's estimates as too low, but said that in any case, the government has underestimated the danger posed by fundamentalist thought in France. The older generation of Muslims, immigrants from Algeria or Morocco seeking to integrate into a better life, has been challenged by younger radicals, born in France but often trained in Saudi Arabia or Pakistan, he said.

"They question everything," he added.
Posted by jtf at 8:50 AM