Was Bill Clinton's visit to North Korea worth the time, energy, and prestige? No way. 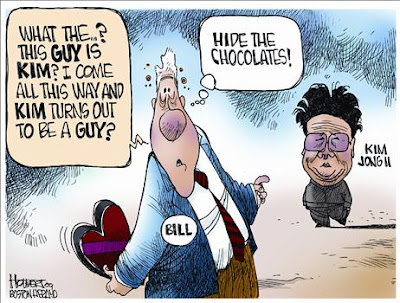 I call your attention to a small detail about Laura Ling and Euna Lee, the two American journalists who were wrongfully arrested, illegally detained, and then capriciously released by the crime family that controls the northern section of the Korean peninsula and treats all its inhabitants as slave-prisoners and all the neighbors within its missile range as hostages.

The two young women were picked up in March and released in August. That means they spent almost half a year in the North Korean prison system. Yet to judge by the photographs of them arriving back on U.S. soil, they were in approximately the same physical condition as they had been when they were first unlawfully apprehended.

Now, I spent less time than that as an honored guest in North Korea and still managed to lose weight during my stay. The shattering statistic that everybody now knows about North Korea is that its citizens are on average 5 to 6 inches shorter than South Koreans. And by that I mean to say "on average"—it seems to be true even of North Korean soldiers. The stunting and shortening of the children of the last famine generation may be still more heartbreaking when we come to measure it. And the fate of those who are in the North Korean gulag can, by this measure, only be imagined. There is a starvation regime within the wider nightmare of the slave system. Yet Ling and Lee had obviously not been maltreated or emaciated in the usual way that even a North Korean civilian, let alone a North Korean prisoner, could expect to be.

The logical corollary of this is obvious. The Kim Jong-il gang was always planning to release them. They were arrested in order to be let go and were maintained in releasable shape until the deal could be done.

Does this not—or should this not—slightly qualify and dilute our joy in seeing them come home? Does the Dear Leader not say to himself, That was easy? Are the North Korean people not being assured, through their megaphone media, that the sun shines so consistently out of the rear end of their celestial boss that even powerful U.S. statesmen will appear at the airport to bring apologies, pay tribute, and receive custody of uninvited guests in the workers' paradise?

Whatever the Pyongyang press has said, it is unlikely to exceed in its flattery the encomium already offered by Lanny Davis, a former consigliere to both Clintons. I strongly urge you to read his entire boot-lick essay here, but I offer you this for flavor:

The release of the two journalists by the North Koreans … was the result of a tour-de-force, trifecta combination of the three most talented and truly great political leaders of our times—Secretary of State Hillary Rodham Clinton; her husband, former President Bill Clinton; and President Barack Obama. Without the special talents and the synergistic magic of the three of them working together …

Hold it right there. As I say, take a look at the whole piece and roll it round your tongue for as long as you can bear it.

Davis is a known fawner on the Clintons, but Henry Kissinger, writing in Sunday's Washington Post, was hardly better. Like the inexpert bore that he so often is, our former secretary of state loosed a positive barrage of rhetorical questions without troubling to answer any of them:

It is inherent in hostage situations that potentially heatbreaking human conditions are used to overwhelm policy judgments. Therein lies the bargaining strength of the hostage-taker. On the other hand, at any given moment, several million Americans reside or travel abroad. How are they best protected? Is the lesson of this episode that any ruthless group or government can demand a symbolic meeting with a senior American by seizing hostages or threatening inhuman treatment for prisoners in their hand? If it should be said that North Korea is a special case because of its nuclear capability, does that create new incentives for proliferation?

The remainder of his article is the sheerest waffle, probably because he and Kim Jong-il share some of the same friends and patrons and business partners in Beijing (this is also why he skates so rapidly over the human rights dimension of the crisis), but at least the questions he declines to answer were worth asking and the provisional answer to the last two of them would appear to be "yes." Since Bill Clinton began the "engagement" with North Korea more than a decade ago, nothing done by its regime has been thought of as punishable. Even since the resumption of the so-called "six-power" agreement in Beijing in February 2007, North Korea has violated it in the nonminor form of nuclear testing and the production of weapons-grade plutonium and has simply ignored all the relevant U.N. resolutions. These aggressive and arrogant policies have been advanced at exactly no cost. And meanwhile, the civilian population of North Korea is kept at the slavery and starvation level, with emergency food aid from overseas exacted by blackmail to make us complicit in the sickening business, while the civilian population of South Korea is threatened with obliteration in the most bloodthirsty terms if any resistance is offered to the nuclear blackmail that keeps the whole horror going in the first place.

As of last week, and as the result of a huge investment of time and energy and prestige and forced politeness, we can now claim to have reduced the North Korean prison population by exactly two, and they were going to be released anyway. In return, we have immensely gratified and flattered the man who kidnapped them and who makes a daily mockery of international law. There was even "remorse" expressed. But guess by whom? Not by the slave master who makes his territory impossible to enter and impossible to leave. A lousy day's work.

Christopher Hitchens is a columnist for Vanity Fair and the Roger S. Mertz media fellow at the Hoover Institution in Stanford, Calif.