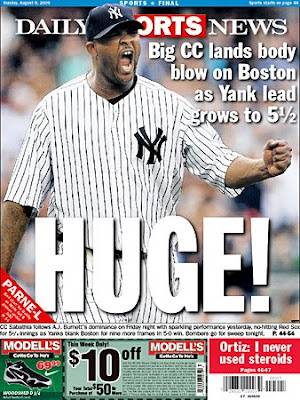 The worm has officially turned.

Their 0-8 start against the Red Sox a distant memory, the Yankees are now threatening to turn the American League East into - dare we say it? - a cakewalk after CC Sabathia came up $161 million large Saturday. The fruits of Brian Cashman's spending last winter have been sufficiently reaped as Sabathia, A.J. Burnett and Mark Teixeira's fingerprints are all over the 3-0 hammerlock the Yankees have put on this show-us-what-you're-made-of August series against their ancient rivals.

Burnett matching zeroes with Red Sox ace and perennial Yankee nemesis Josh Beckett set the tone for Friday night's marathon Yankee win. Teixeira provided the necessary offense Thursday, going 3-for-4 with a homer and two doubles and then yesterday by singling home the first run in the third and drawing the one-out walk that got things in motion for the run that made it 3-0 in the seventh.

And then there is the new 0-fer that is defining what's going on between these two teams now - 24 scoreless Red Sox innings after yesterday's 5-0 Yankee win in which Sabathia flirted with a no-hitter for 5-2/3 innings and left to a thunderous ovation with two outs in the eighth and nine strikeout notches on his belt.

"That was unbelievable," Sabathia said, "I had goose bumps walking off there."

This was what he was brought here for. Burnett and Teixeira, too. For the three of them, Cashman doled out more than 400 million Steinbrenner dollars. The first big dividend has been this weekend in which the Yankees have opened up a 5-1/2-game lead on the Sawx and have served notice that they can pitch with anyone and hit from top to bottom. "We're good," Sabathia said with a smile.

He was perfect for 4-1/3 innings before David Ortiz worked him for an eight-pitch walk. Then, after he retired the first two Sox in the sixth, Jacoby Ellsbury broke up the no-hitter by dunking a hit into center field. "I'd be crazy to say I wasn't thinking about the no-hitter," Sabathia said, "but in my mind I was just trying to get outs and get my teammates back to the dugout in a hurry."

Granted, the Red Sox are not functioning with all their parts right now. Jason Bay, one of their best hitters, has not played in this series, and instead of facing Tim Wakefield's always menacing knuckleballs in Thursday's opener, the Yankees were the beneficiaries of broken 42- year-old John Smoltz's sad and sorry last stand. But as Derek Jeter put it, when you have power pitchers like Sabathia and Burnett on their game, "you could put them up against an All-Star team."

One can only guess if Red Sox GM Theo Epstein is having any second thoughts about bowing out of the Teixeira bidding last winter when it threatened to go above $190 million - and thereby paving the way for Cashman to come in the back door and land the switch-hitting first baseman for $180 million. Teixeira has bolstered the Yankee lineup the way Sabathia and Burnett have reestablished the top-of-the-rotation dominance that characterized the Yankees' championship teams under Joe Torre.

"CC gave us exactly what we needed," Joe Girardi said. "We knew we were short (after Friday night's 15-inning marathon in which he used six pitchers) and I'd have to say it was his best performance as a Yankee."
"For me, every game is important," Sabathia said, "but these games in the division against the Red Sox are especially big. I know that."

Even though the Yankees carried a 2-1/2-game lead coming into the series, all they heard was that 0-8 against the Sox. Now it is 3-8, the lead is 5-1/2 and the swagger is on their side. And, oh yeah, as opposed to June, it's the Red Sox's guy who is now under steroid siege. At least A-Rod didn't need a week to figure out how to tell people he was guilty.

A lot can still change, of course, from here to October, just as it changed so dramatically from June to August. But Sabathia, Burnett and Teixeira have transformed this Yankee team, and the Red Sox have now come to see it firsthand. They've seen more than that, though. They've seen a Yankee bullpen that can match zeroes with theirs, and possibly be even deeper. And they've seen a lineup that can impose hurt - like theirs used to do - from all nine slots.

We've seen a reversal of roles this weekend. Now, in August, it is the Yankees who are feeling good about themselves and the Red Sox who have been given reason to harbor some doubt as to whether they're as good as they were supposed to be back in June.

bmadden@nydailynews.com
Posted by jtf at 9:21 AM

After this series the Yanks sit 6.5 games ahead of boston leaving Boston tied for the wild card lead and the Yankees with the best record in all of MLB. Time for the BoSox to worry?

With A-Rod and Tex on a roll its gonna be hard to stop those boys.