Russell Celebrates His Bond With Auerbach 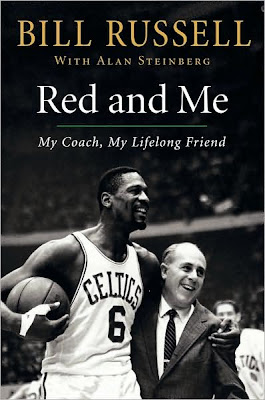 Lighting a victory cigar with just enough time on the clock to infuriate his opponent would have been a problem for a famed Celtics patriarch during Boston’s recent overtime-laden N.B.A. playoff series with Chicago. But Red Auerbach would have enjoyed the instant seven-game classic because it was his kind of sport, parquet warfare start to finish, according to the man who co-originated the brand.

“I think he always enjoyed it more when we had to really work for it, when we won close games,” Bill Russell said. “He used to say, ‘Play hard, hard as you can, everything will take care of itself.’ ”

Russell was in New York on Wednesday promoting a new book, “Red and Me: My Coach, My Lifelong Friend,” before heading to Boston to watch the Celtics even their second-round series against Orlando with a 112-94 victory. Once upon a time, that kind of game would have had Auerbach floating smoke rings to the old Boston Garden rafters in garbage time.

Without the injured Kevin Garnett, the Celtics may not have enough length to squeeze past Dwight Howard and the Magic, much less LeBron Inc., in Cleveland in a potential conference finals. But the Celtics did win last season, ending a drought that must have seemed interminable to Auerbach, who lived through 20 of the 21 bannerless springs.

On the June night the Celtics claimed their 17th title by routing the Lakers inside the new Gahden with the bank name embellishment, at least Russell was around to give Garnett a hug.
Between titans from different centuries, Celtics pride was rekindled in a poignant moment captured by the network television cameras.

You couldn’t have blamed Russell that night for thinking, If only Red could have lived to see this. But Russell didn’t. Not his style to overdo the sentiment, or Auerbach’s, for that matter.

“You see, I never mourned Red’s death,” Russell said in an interview. “I always celebrated his life because I knew he wouldn’t have wanted any of that other stuff. He didn’t live that way, didn’t dwell on what he didn’t have, didn’t feel sorry for himself. One of the reasons we were friends is that we were so alike that way.

“So I knew he would have been proud of that team because contrary to popular belief, their talent was not overwhelming. But they played with an edge, to win, and that’s the kind of team Red loved.”

In the book, Russell writes that he and Auerbach hardly ever socialized or discussed personal matters but that their friendship endured through decades of telephone check-ins and the occasional Celtics game in Boston.

There is a photo in the book — one I had seen elsewhere — of Auerbach and Russell in the stands, Auerbach seated along a rail, holding a cane, with Russell behind him, leaning forward, hands folded under his chin. When I first saw that photo, I wondered why they wouldn’t sit alongside each other, so I asked Russell about it.

“That’s the way it always was, and I don’t even know how it started,” he said. In Russellesque fashion, he added, “It was like putting on a pair of shoes.”

He meant it was more comfortable that way, better not to have to turn a head to talk. Or better yet, just watch the game, which was the whole point of their association, which Russell said was launched during the 12th game he played as a rookie in the 1956-57 season.

Russell was upset because the offense consisted of clear-outs and post-ups for the others, while he watched from the perimeter. During a timeout huddle, he removed himself. When Auerbach asked why, he said, “I don’t need to be in the huddle to know how to get out of their way.”

In Russell’s opinion, most coaches would have convicted him right there of rookie insubordination. Gruff and confrontational as Auerbach often was, he was also a pragmatist. He knew the Celtics had never won anything because they had lacked an impact center. Now that they had one, what good was he as a tall traffic marker?

The kid had a point. After that, the paint belonged to Russell, who soon began to realize that in Auerbach he had found a co-worker, not a taskmaster.

Proud, fiercely independent and no doubt difficult in his day, Russell said he didn’t need many friends but he had one in Auerbach, right to the end in October 2006 when, he said, Auerbach was still coaching.

On the day Russell was ending his last visit with Auerbach, he was walking out the door when Auerbach called to him. “Listen, Russ,” he said. “This is something important. When you get old, don’t fall. Because that’s the start of the end. So remember: don’t fall.”

Simple, unsentimental, to the point — as was the 75-year-old Russell’s answer when asked why he had written the book now.

“I also have to be mindful of my own mortality,” he said with his trademark unabashed laugh.

E-mail: hjaraton@nytimes.com
Posted by jtf at 7:41 AM