The ADL: Wrong About Geert Wilders

After the heroic Dutch parliamentarian Geert Wilders spoke in Florida last week, the Anti-Defamation League (ADL) condemned his remarks, saying: “In his speeches, he claimed that ‘Islam is not a religion’ and ‘the right to religious freedom should not apply to this totalitarian ideology called Islam.’ Mr. Wilders also stated that the Koran is a book of hatred, and that Mohammed was both ‘a pedophile and a warlord.’”’ 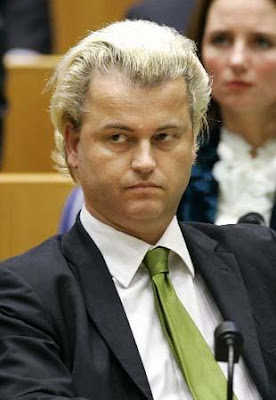 These are serious charges, but they don’t stand up to close inspection. In light of the fact that the hadith collection that Muslims consider most reliable, Sahih Bukhari, reports no less than five times that Muhammad (then in his fifties) consummated his marriage with Aisha when she was nine years old, Wilders would have little difficulty making the charge of pedophilia stick. And given that Muhammad participated in numerous battles during his prophetic career, all but one of them offensive, the “warlord” charge can easily be established from texts that Muslims consider accurate in reporting the details of Muhammad’s life.

And the Koran a book of hatred? Again, the book itself gives the answer in passages like these and many others:

“The Jews call ‘Uzair a son of Allah, and the Christians call Christ the son of Allah. That is a saying from their mouth; (in this) they but imitate what the unbelievers of old used to say. Allah’s curse be on them: how they are deluded away from the Truth!” -- Qur’an 9:30

“Fight those who believe not in Allah nor the Last Day, nor hold that forbidden which hath been forbidden by Allah and His Messenger, nor acknowledge the religion of Truth, (even if they are) of the People of the Book, until they pay the Jizya with willing submission, and feel themselves subdued.” -- Qur’an 9:29

“Therefore, when ye meet the Unbelievers (in fight), smite at their necks. At length, when ye have thoroughly subdued them, bind a bond firmly (on them): thereafter (is the time for) either generosity or ransom, until the war lays down its burdens.” -- Qur’an 47:4

“Those who reject (Truth), among the People of the Book and among the Polytheists, will be in Hell-Fire, to dwell therein (for aye). They are the worst of creatures.” -- Qur’an 98:6

But when Wilders speaks of restricting Muslims’ religious freedom, his words appear more problematic. Wilders’s full statement on this, however, elucidates what he meant: “Stop pretending that Islam is a religion. Islam is a totalitarian ideology. In other words, the right to religious freedom should not apply to Islam.”

I disagree with Wilders’s statement that Islam is not a religion. Islam is certainly a religion -- a belief-system that, like other religions, purports to relate human beings to the divine. But at the same time, I understand why he says that Islam is not a religion -- because the strictly religious aspects of Islam are actually of no concern to unbelievers at all. It makes no difference to me if a Muslim wants to pray five times a day, or read the Qur’an, or believes that Muhammad is a prophet -- except insofar as it impinges me as a political program that demands my conversion, subjugation, or death.

There are precedents for how America can deal with this threat. The U.S. did not outlaw the Communist Party of the USA, but it did move actively to suppress Communist activity, driving the party almost completely underground after World War I and always working energetically against Communist subversive activity in the United States. The religious aspects of Islam obscure the fact that Islamic jihadists are pursuing a political program that seeks, no less unmistakably than did the Communists, to replace the U.S. Constitution with a system that would deny many basic rights guaranteed by that Constitution.

The political program of Islam is generally not recognized in the U.S. today, but nonetheless there are many groups dedicated to carrying it out. They should not be allowed the protection of a religious cover to obscure their criminal and seditious activity. Section 2385 of the federal criminal code states that “whoever knowingly or willfully advocates, abets, advises, or teaches the duty, necessity, desirability, or propriety of overthrowing or destroying the government of the United States or the government of any State, Territory, District or Possession thereof, or the government of any political subdivision therein, by force or violence, or by the assassination of any officer of any such government…shall be fined under this title or imprisoned not more than twenty years, or both, and shall be ineligible for employment by the United States or any department or agency thereof, for the five years next following his conviction.”

This already existing law -- revised as of January 2, 2006 -- could and should be applied to Islamic groups that call for implementation of Sharia in the U.S., and work toward that implementation. In short, just as freedom of religion was not deemed to be a sufficient justification for Mormon polygamy in the late nineteenth century, so now freedom of religion should not be deemed to be sufficient justification for agitation on behalf of a system of laws that would deny freedom of speech and the equality of rights of all people before the law. The ADL has unfairly maligned Geert Wilders, and in doing so, has placed itself on the wrong side of the great battle to defend free speech and free societies against the advancing global jihad.

- Robert Spencer is a scholar of Islamic history, theology, and law and the director of Jihad Watch. He is the author of eight books, eleven monographs, and hundreds of articles about jihad and Islamic terrorism, including the New York Times Bestsellers The Politically Incorrect Guide to Islam (and the Crusades) and The Truth About Muhammad. His latest book, Stealth Jihad: How Radical Islam is Subverting America without Guns or Bombs, is available now from Regnery Publishing.
Posted by jtf at 7:46 AM