By Parke Puterbaugh
Special to the Greensboro News & Record
http://www.news-record.com/life
Monday, May 4, 2009

For one night, Greensboro became “Steensboro,” according to a fan-made banner held aloft by Bruce Springsteen during his concert at the Greensboro Coliseum on Saturday. 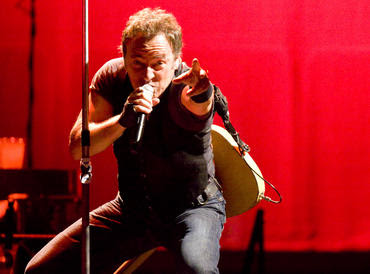 It sure seemed that way, as Springsteen and the E Street Band were received like conquering heroes during an exhilarating three-hour show that repeatedly drove the adoring, near-sellout crowd into fist-thrusting, sing-along frenzies.

As he has in the past, Springsteen gave Greensboro a particularly energetic show partly because the audience accorded him such an enthusiastic reception.

During his encore, Springsteen made a comment I’ve heard echoed over the decades by other touring musicians: “Greensboro is consistently one of the best audiences in the United States.”

He performed nonstop for three hours in a show that mixed older classics (“Badlands,” “Growin’ Up,” “Promised Land”) with relative rarities (“Seeds,” “Johnny 99,” an electric “Ghost of Tom Joad”) and songs drawn from recent albums (“Radio Nowhere,” “Outlaw Pete,” “Working on a Dream.”)

One particularly moving section linked the inspirational “Lonesome Day” and “The Rising” — songs about dealing with and rising above the events of Sept. 11, 2001 — with the still-anthemic “Born to Run,” which brought the trilogy to a thrilling crescendo.

Springsteen and the E Street Band also paid homage to their roots in garage-rock and soul music of the 1960s with a three-song interlude of Eddie Floyd’s “Raise Your Hand,” Johnny Rivers’ “Seventh Son” (written by bluesman Willie Dixon) and the McCoys’ “Hang On Sloopy.”

The latter two were part of a “Stump the Band” section that elicited printed entries from audience members. Springsteen ventured into the crowd to collect a pile of banners and posters. Although he quickly handed back one that read “Helter Skelter,” he honored the request of a fan who flew down from New York hoping to hear him perform “I’m on Fire” (from “Born in the U.S.A.”)

Noticeably missing from the E Street Band was Springsteen’s wife, Patti Scialfa; he explained she was still sore after falling from a horse. But E Street was still plenty crowded, with two guitarists (Nils Lofgren and longtime Springsteen foil Steve Van Zandt), two keyboardists, and violinist Soozie Tyrell (who also doubled on mandolin and acoustic guitar).

There also was some new blood on hand, as drummer Max Weinberg’s 18-year-old son, Jay, pounded the skins for roughly half the concert, including the entire six-song encore.

He brought fresh energy to the E Street Band, loosening up and lighting a fire under the band. No disrespect to his dad, but Jay Weinberg was a phenomenal spark plug.

The encore was a miniconcert in itself, including an old lament by Stephen Foster (“Hard Times”), two chestnuts from “Born to Run” (“Thunder Road,” “Tenth Avenue Freeze-Out”) and a rousing, topical Irish jig (“American Land”).

There’s not much more to say but, “Come back to Steensboro anytime, Bruce.” 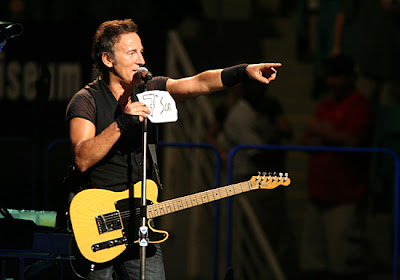 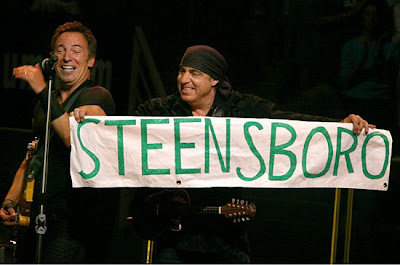 Notes: "We're in Steensboro now!" Bruce shouted at the end of the show, as the crowd roared. "We're in Steensboro now!" He and Steve had just finished dancing across the stage, each holding an end of a long STEENSBORO banner as a roisterous "Glory Days" brought this 27-song set to a close. "They must be putting something in the water," Springsteen said during the encore, "because Greensboro is consistently one of the best audiences in the United States. But I don't know why! Why?! Damn!" Who knows why, but he's absolutely right, the whole old-school building was rocking, and Bruce repaid in kind, loading the setlist with treats.

Things didn't begin so promisingly. Cool to get Jay Weinberg opening the show, playing from "Badlands" to "Raise Your Hand," but otherwise a slow start. Lots of air hankies from the Boss, suggesting he might have been under the weather, and he seemed to be working hard to get things in gear. After the sign collection, though, we achieved liftoff with the first request, an out-of-left field cover of Willie Dixon's "Seventh Son," a 1965 hit for Johnny Rivers. "I don't know where some of this stuff comes from!" Bruce laughed, paying special attention to the kid who had requested it via a small sign from way off on the side. "Is it hard?" he asked, conferring with Steve, "It is. Steve says it's hard." But they pulled it off, the backup singers walking out on the wire with the rest of the band, and followed it with a raucous "Hang on Sloopy," house lights up and the whole place going nuts. Encore-level nuts, mid-show. A "bar band special," Bruce called this one: "People come here asking for things they think we can't play... this is easy stuff!"

"Growin' Up" was followed by a third sign request, "Flew from NYC to hear 'I'm on Fire' with my Dad." Real nice, particularly Bruce's haunting, high-register vocals at the end as the crowd was bathed in red light. A few songs later, Springsteen finally remembered some records he made in the early '90s, giving "Human Touch" the rare E Street treatment. "We haven't played this one in a long time.... We'll see if we can get through it for you, we used to know it!" We can only hope songs like this, "Better Days," "Living Proof" and others from the era get more play, because it was a breath of fresh air tonight: a blistering lead from Bruce, lovely backing vocals from Soozie (alas, no Patti tonight), building to monster intensity at the end. More, please. (Hell, while we're at it, "The Long Goodbye"! "All or Nothing at All"!) 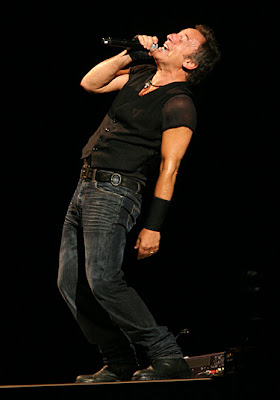 "Cadillac Ranch" was a surprise set-closer after "Born to Run," Bruce grabbing a cowboy hat from the crowd and singing about the "woods of Caroline" and driving "through the Carolina night." House lights up, the roof practically came off the place. It's no exaggeration to say that folks were swooning; by "Tenth Avenue" in the encore, Bruce had to bring some water down front, and Steven helped get a gal out of the pit who was clearly in danger of passing out. Good to see the Session Band's "Cousin" Frank Bruno, Jr. back in the fold for "American Land," sharing the mic with Soozie once again and not having forgotten a lick of it. And then the high-watt "Glory Days," Steve calling for "Steensboro Boss Time," with its "Louie, Louie" finale as the icing on the cake.

"I don't want to be sacrilegious," said an out-of-towner after the show, "But that crowd was better than Philly." And shucks, right here in Backstreets' backyard. Color us proud. Color us impressed. Color us all the moreso after such a middling start. An inspired turnaround, an inspiring show.

- Chris Phillips reporting - photographs by Guy Aceto
Posted by jtf at 5:38 AM