Paving the Way for Reagan 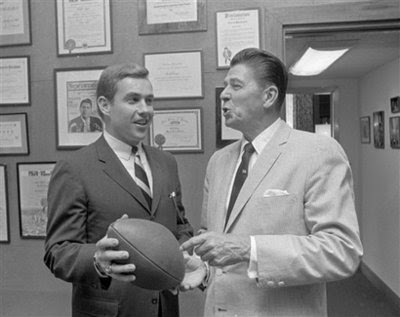 FILE - In this July 3,1967 picture, California Gov. Ronald Reagan, right, and his special assistant Jack Kemp, discuss football in his office in Scaramento, Calif. Kemp, who had been working as member of the governor's staff since February, will leave California the following week to begin training for his 11th year in pro football.
(AP Photo/WJZ, File)

There are some people you cannot imagine ill. One such person is Jack Kemp, the onetime Buffalo Bills quarterback, longtime House Republican leader and godfather to the supply-side -economics movement. Whatever he was doing, Jack always has been in perpetual motion.

But the shock of his serious battle with cancer has prompted many of us to reflect on one indisputable fact. Without Jack Kemp, there would have been no Reagan Revolution. He was John the Baptist to "the Oldest and Wisest"--and in doing so became one of the most influential political figures of our time.

Had it not been for the radical 30 percent across-the-board tax rate cut that Kemp sold to candidate Reagan, America never would have realized the prosperity of the Reagan era and beyond. (Looking back, can you imagine a society that had accepted the legitimacy of 70 percent tax rates on our best producers?) By the sheer force of his evangelistic personality, he brought supply-side economic theories to influential journalists and politicians--and also to Ronald Reagan--legitimizing the concept that tax rate cuts were essential to unleash the creativity and innovation of the American dream.

Considering the crushing egos of the brilliant band of volatile individuals who constituted the supply-side movement, it is hard to imagine how anyone kept them in the same room long enough to influence mainstream political thought. But Kemp was, after all, the old quarterback who knew the importance of molding all sorts of individuals into a team. 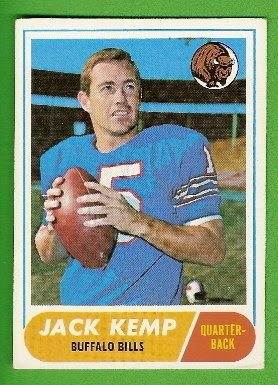 Yet it was Kemp's tax-cut economics that prevailed, revitalizing the American work ethic, putting paid to the stagflation of the 1970s. Even today--unlike at critical times in the 20th century--there are few leaders ready to turn to tariffs and tax increases to battle economic stagnation.

But Kemp brought more to the table than supply-side tax cuts. During the Carter administration, it was Kemp's congressional operation that constituted a virtual shadow cabinet for the Defense Department, with Bill Schneider pushing defense concepts that were the seed corn of the Strategic Defense Initiative that helped force an end to the Evil Empire.

Kemp also was obsessed with making sure minorities were important to the Republican party. Wherever he traveled (including throughout the South), he constantly recruited blacks to his party. He saw increasing the Jewish Republican vote as equally important.

As right as he was in concept, that passion would betray him politically. In 1980, New York senator Jacob Javits was wasting away with Lou Gehrig's disease, and Kemp was his natural successor. But Javits's wife convinced her husband to run again. Kemp refused to challenge Javits in the GOP primary because he didn't want to be known for ending the political career of this longstanding Jewish Republican. Conservatives turned instead to an obscure Long Island politician named D'Amato--and the rest is history.

Politics can be an up-or-out game. Meanwhile, the graybeards around Reagan had no interest in Kemp for the vice presidency. In the 1980s, without the clout of the New York Senate seat, the influence of the Buffalo congressman who had done so much to create Reaganism began to wane. The Pat Robertson operation helped derail his dream of the Republican nomination in 1988. As HUD secretary, Kemp was one of the few conservative activist elements of the George H.W. Bush administration, and in 1996 he ended up running for vice president on the Dole ticket. But the era in which he commanded the supply-side movement was no more. 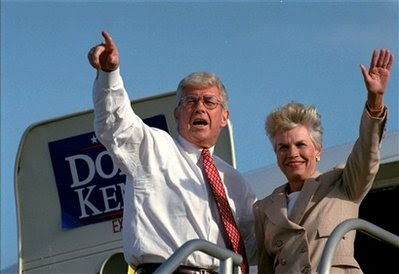 During the recent presidential campaign, I happened to attend a McCain fundraiser that featured Kemp as the speaker. The Kemp of that evening was the old Jack Kemp--delivering a remarkable lecture that focused on the folly of Fannie Mae and Freddie Mac. At one point, someone turned to me to express the wish that it had been Kemp debating Obama instead of McCain.

Now comes word of his serious illness. Eighteen years ago when my son suffered from cancer, Jack Kemp inscribed a football poster to him that has remained over his bed ever since. Across the jersey of old number 15, he inscribed the words of Churchill: "Never, never, never give in."

You can bet those words continue to guide him today.

Kenneth Tomlinson is the former editor in chief of Reader's Digest.
Posted by jtf at 10:32 AM