By Charles Krauthammer
The Washington Post
http://www.washingtonpost.com/
Friday, May 8, 2009

"Apart from the time restriction (a truce that lapses after 10 years) and the refusal to accept Israel's existence, Mr. Meshal's terms approximate the Arab League peace plan . . ."

-- Hamas peace plan, as explained by the New York Times

"Apart from that, Mrs. Lincoln, how did you enjoy the play?"

The Times conducted a five-hour interview with Hamas leader Khaled Meshal at his Damascus headquarters. Mirabile dictu, they're offering a peace plan with a two-state solution. Except. The offer is not a peace but a truce that expires after 10 years. Meaning that after Israel has fatally weakened itself by settling millions of hostile Arab refugees in its midst, and after a decade of Hamas arming itself within a Palestinian state that narrows Israel to eight miles wide -- Hamas restarts the war against a country it remains pledged to eradicate.

There is a phrase for such a peace: the peace of the grave. 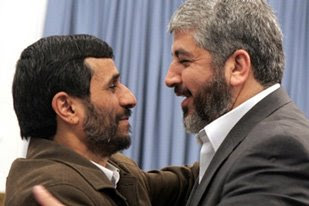 Westerners may be stupid, but Hamas is not. It sees the new American administration making overtures to Iran and Syria. It sees Europe, led by Britain, beginning to accept Hezbollah. It sees itself as next in line. And it knows what to do. Yasser Arafat wrote the playbook.

With the 1993 Oslo accords, he showed what can be achieved with a fake peace treaty with Israel -- universal diplomatic recognition, billions of dollars of aid, and control of Gaza and the West Bank, which Arafat turned into an armed camp. In return for a signature, he created in the Palestinian territories the capacity to carry on the war against Israel that the Arab states had begun in 1948 but had given up after the bloody hell of the 1973 Yom Kippur War.

Meshal sees the opportunity. Not only is the Obama administration reaching out to its erstwhile enemies in the region, but it begins its term by wagging an angry finger at Israel over the Netanyahu government's ostensible refusal to accept a two-state solution.

Of all the phony fights to pick with Israel. No Israeli government would turn down a two-state solution in which the Palestinians accepted territorial compromise and genuine peace with a Jewish state. (And any government that did would be voted out in a day.) Netanyahu's own defense minister, Ehud Barak, offered precisely such a deal in 2000. He even offered to divide Jerusalem and expel every Jew from every settlement remaining in the new Palestine.

The Palestinian response (for those who have forgotten) was: No. And no counteroffer. Instead, nine weeks later, Arafat unleashed a savage terror war that killed 1,000 Israelis.

Netanyahu is reluctant to agree to a Palestinian state before he knows what kind of state it will be. That elementary prudence should be shared by anyone who's been sentient the last three years. The Palestinians already have a state, an independent territory with not an Israeli settler or soldier living on it. It's called Gaza. And what is it? A terror base, Islamist in nature, Iranian-allied, militant and aggressive, that has fired more than 10,000 rockets and mortar rounds at Israeli civilians.

If this is what a West Bank state is going to be, it would be madness for Israel or America or Jordan or Egypt or any other moderate Arab country to accept such a two-state solution. Which is why Netanyahu insists that the Palestinian Authority first build institutions -- social, economic and military -- to anchor a state that could actually carry out its responsibilities to keep the peace.

Apart from being reasonable, Netanyahu's two-state skepticism is beside the point. His predecessor, Ehud Olmert, worshiped at the shrine of a two-state solution. He made endless offers of a two-state peace to the Palestinian Authority -- and got nowhere.

Why? Because the Palestinians -- going back to the U.N. partition resolution of 1947 -- have never accepted the idea of living side by side with a Jewish state. Those like Palestinian President Mahmoud Abbas, who might want to entertain such a solution, have no authority to do it. And those like Hamas's Meshal, who have authority, have no intention of ever doing it.

Meshal's gambit to dress up perpetual war as a two-state peace is yet another iteration of the Palestinian rejectionist tragedy. In its previous incarnation, Arafat lulled Israel and the Clinton administration with talk of peace while he methodically prepared his people for war.

letters@charleskrauthammer.com
Posted by jtf at 8:00 AM