When you buy words, you had better know what you are buying.

Justice David Souter’s retirement from the Supreme Court presents Pres. Barack Obama with his first opportunity to appoint someone to the High Court. People who are speculating about whether the next nominee will be a woman, a Hispanic, or whatever, are missing the point. That we are discussing the next Supreme Court justice in terms of group “representation” is a sign of how far we have already strayed from the purpose of law and the weighty responsibility of appointing someone to sit for life on the highest court in the land. 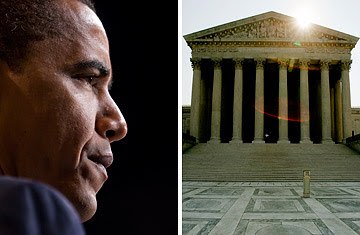 That President Obama has made “empathy” with certain groups one of his criteria for choosing a Supreme Court nominee is a dangerous sign of how much farther the Supreme Court may be pushed away from the rule of law and toward even more arbitrary judicial edicts to advance the agenda of the Left and set it in legal concrete, immune from the democratic process.

Would you want to go into court to appear before a judge with “empathy” for groups A, B, and C, if you were a member of groups X, Y, or Z? Nothing could be farther from the rule of law. That would be bad news, even in a traffic court, much less in a court that has the last word on your rights under the Constitution of the United States.

Appoint enough Supreme Court justices with “empathy” for particular groups and you would have, for all practical purposes, repealed the 14th Amendment, which guarantees “equal protection of the laws” for all Americans. We would have entered a strange new world, where everybody is equal but some are more equal than others. The very idea of the rule of law becomes meaningless when it is replaced by the empathies of judges.

Barack Obama solves this contradiction, as he solves so many other problems, with rhetoric. If you believe in the rule of law, he will say the words “rule of law.” And if you are willing to buy it, he will keep on selling it.

Those people who just accept soothing words from politicians they like are gambling with the future of a nation. If you were German, would you be in favor of a law “to relieve the distress of the German people and nation”? That was the law that gave Hitler dictatorial power.

He was just another German chancellor at the time. He was not elected on a platform of war, dictatorship, or genocide. He got the power to do those things because of a law “to relieve the distress of the German people.”

When you buy words, you had better know what you are buying.

In the American system of government, presidential term limits restrict how long any given resident of the White House can damage this country directly. But that does not limit how long, or how much, the people he appoints to the Supreme Court can continue to damage this country, for decades after the president who appointed them is long gone.

The biggest danger in appointing the wrong people to the Supreme Court is not just in how they might vote on some particular issues — whether private property, abortion, or whatever. The biggest danger is that they will undermine or destroy the very concept of the rule of law — what has been called “a government of laws and not of men.”

Some people say that whomever Barack Obama appoints to replace Justice Souter doesn’t really matter, because Souter is a liberal who will probably be replaced by another liberal. But if no one sounds the alarm now, we can end up with a series of appointees with “empathy”— which is to say, with justices who think their job is to “relieve the distress” of particular groups, rather than to uphold the Constitution of the United States.

— Thomas Sowell is a senior fellow at the Hoover Institution.
Posted by jtf at 8:33 AM