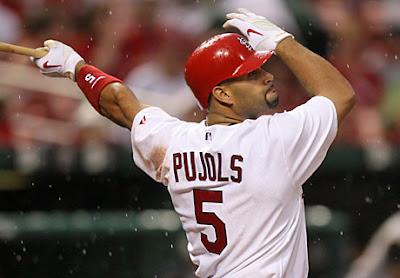 Was Albert Pujols really the Most Valuable Player in the National League this season?

Not really, if you define “most valuable” as “biggest difference maker.”

With Albert hitting third, the Cardinals finished fourth in the National League Central, 11½ games behind the Chicago Cubs. Without Albert’s machine-like production, the Cards would probably have finished fifth instead, allowing the Cincinnati Reds to move up a spot.

But Baseball Writers Association of America voters decided to give Pujols this MVP trophy as a Lifetime Achievement Award. The voters voted to recognize his massive presence in the sport.

The writers acknowledged what he brings to his team every time he digs into the batter’s box and glares back at the pitcher.

That was the right thing to do.

Albert’s eight-season run ranks among the greatest career starts in the history of Our National Pastime. His consistent production, physical toughness, fierce competitiveness and respected leadership make him a titan among peers.

Few athletes mean as much to their teams. You could put Cleveland Cavaliers star LeBron James on that pantheon. New Jersey Devils goaltender Martin Brodeur would make that list, along with Baltimore Ravens linebacker Ray Lewis and Indianapolis Colts quarterback Peyton Manning.

Philadelphia Phillies stars Ryan Howard and Jimmy Rollins won the last two trophies after posting huge numbers for a playoff contender. Good for them, they earned the honors by lifting that long-frustrated franchise.

At some point, though, the baseball writers to recognize that Pujols has been the most forceful player in this league from the minute he arrived.

At some point, these experts had to quit taking his brilliance for granted and give him baseball’s most coveted individual award.

Sure, you could make a great case for Howard again. The Lafayette High School product literally powered the Phillies into postseason play with his massive run production (48 homers, 146 RBI).

True, his .251 batting average would have been the worst since this award when to defensive wizard Marty Marion (.267) in 1944. But Howard’s power boosted the Phillies into postseason play.

THAT is real value. Even Albert could make that argument, based on remarks he made two years ago after Howard edged him for the ’06 award.

“I see it this way: Someone who doesn't take his team to the playoffs doesn't deserve to win the MVP,” he told a news conference in the Dominican Republic.

Under this theory, perhaps pitcher C.C. Sabathia should have won the award. After arriving from the Indians, he pitched the Brewers to their first postseason bid since 1982.

Or maybe Manny Ramirez should have won, since he transformed the Dodgers from also-ran to juggernaut after arriving from Boston in a late-season trade. All ManRam did was hit .396 with 53 RBI in 53 games after changing leagues.

Both Sabathia and ManRam were transformational forces for teams needing a huge lift. The writers tend not to recognize half-seasons (or less) when examining candidates.

The Cards hurt Pujols’ MVP bid by fading this season after injuries took a big toll. Not since Andre Dawson in 1987 has a player won NL MVP honors while playing for an also-ran.

The players know who the real MVP is. For a change, the baseball writers figured it out as well.
Posted by jtf at 7:35 AM