As GM Goes, So Goes the GOP 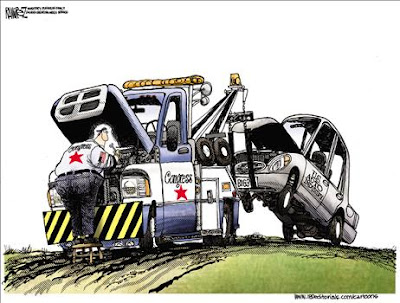 When Hank Paulson demanded $700 billion to haul away the trash in the dumpsters of JPMorgan Chase and Goldman Sachs—assuring us we could hold a garage sale of the junk—they rebelled. They acted as the nation, by 100 to one, demanded. They killed the Wall Street bailout.

The Dow quickly sank another 1,000 points, and, charged with criminal irresponsibility by the elites, the GOP buckled, reversed itself, rescued the bailout—and was wiped out on Nov. 4.

Now we hear from Paulson that the $700 billion Congress voted will not, after all, be used to buy up all that rotten paper on the books of the big banks. Some banks are using the cash to buy other banks.

So Republicans are right to be enraged. They are victims of the biggest bait-and-switch in political history.

But they are now about to do something terminally stupid. With GM, Ford and Chrysler teetering on the brink, they are turning a cold stone face to Detroit and are about to follow the counsel of that quintessential Bushite Dick Darman, who said of our computer chip industry, "If our guys can't hack it, let 'em go."

Are Republicans aware of what they are about to do?

When workers, execs, engineers, dealers, salesmen and suppliers are all factored in, the Big Three employ 3 million people who contribute $21 billion a year to Social Security and Medicare, and $25 billion in federal income taxes. Add in all the businesses that depend on the auto industry, and we are talking about one-tenth of the U.S. labor force.

As columnist Tom Piatak of Chronicles and Takimag.com writes, 850,000 retirees, and their families, depend for pensions and health care on the Big Three. If they go under, the burden falls on us.

And to let the auto industry die is to write America o out of much of the economic future of the planet.

In a good year, like 2005, Americans buy more than 17 million new cars, and West Europeans as many. Tens of millions in Eastern Europe, Russia, China, India and Southeast Asia are now moving into the middle class each year. These folks will all need or want one or two family cars. If we let the U.S. auto industry die, that immense and burgeoning market will be lost forever to America, and ceded to Asia.

"Who cares?" comes the free-traders' reply. Japanese and Koreans are setting up factories here. They can pick up the slack.

But that means Americans will work for and depend on foreign companies for a necessity of our national life as vital as the imported oil and gas on which our cars and trucks operate. All the profits of the mighty automobile industry in America will be sent abroad.

Before Republicans follow this free-trade fanaticism to their final interment, they might study the results of a poll by Peter Hart: [PDF]

* Seventy-eight percent of Americans believe the U.S. auto industry is highly or extremely important. Three percent think we can do without it.

* Ninety percent of Americans believe the death of the U.S. auto industry would do great damage to our economic future.

* By 55 percent to 30 percent, Americans favor federal loans to save it. And by 64 percent to 25 percent Americans back President-elect Obama's resolve not to let the U.S. auto industry go under.

If the GOP blocks these loans, and the industry dies, the party can forget about Ohio, Michigan and the industrial Midwest. For the Reagan Democrats will never come home again. Nor should they.

By the choices we make, we define ourselves and reveal what we truly care about. Thus, consider:

We bail out the New York and D.C. governments of Abe Beame and Marion Barry. We bail out a corrupt Mexico. We bail out public schools that have failed us for 40 years.

We bail out Wall Street plutocrats and big banks.

But the most magnificent industry, the auto industry that was the pride of America and envy of the world, we surrender to predator-traders from Asia and Europe, lest we violate the tenets of some 19th-century ideological scribblers that the old Republicans considered the apogee of British stupidity.

Nancy Pelosi is talking about tying loans to a restructuring of the industry. But Congress is not competent to do that.

What needs to be restructured is the U.S. tax-and-trade regime.

Dump globalism. Instruct Japan, Canada, Korea, Germany and China that if they wish to sell cars here, they will assemble them here and produce the parts here. And we shall have the same free access to and same share of their auto market as they have of ours.

To accomplish this, use the same import quotas and tariffs Ronald Reagan used to save the steel industry and Harley-Davidson.

Reciprocal trade. Even Democrats like FDR used to practice it.

- Patrick J. Buchanan needs no introduction to VDARE.COM readers; his book State of Emergency: The Third World Invasion and Conquest of America, can be ordered from Amazon.com. His latest book is Churchill, Hitler, and "The Unnecessary War": How Britain Lost Its Empire and the West Lost the World, reviewed here by Paul Craig Roberts.
Posted by jtf at 4:27 PM