International lawyers should walk the plank 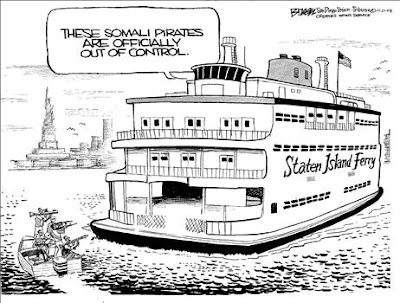 In the Jerusalem Post, Caroline Glick makes the point about the piracy in the Gulf of Aden that I made here back in April and repeated on Question Time this week– that a major reason this menace has got out of hand is the spineless response of Britain and other western nations which have tied up their own hands through international law and ‘human rights’ doctrine. A Wall Street Journal article a few days ago made exactly the same point, noting that the British Foreign Office instructed the British Navy not to apprehend pirates lest they claim that their human rights were harmed, and request and receive asylum in Britain.

Glick broadens it out to the wider moral bankruptcy which is bringing western civilisation down:

The west’s perverse interpretations of human rights and humanitarian law, which bar it from handling one of the most acute emerging threats to the international economy, is a consequence of the West's abdication of moral and legal sanity in its dealings with international terror. In the 1960s and 1970s, when international terrorism first emerged as a threat to international security, the West adopted international treaties and conventions that tended to treat terrorism as a new form of piracy. Like piracy, terrorism was to be treated as an attack on all nations. Jurisdiction over terrorists was to be universal. Such early views were codified in early documents such as the Convention for the Suppression of Unlawful Seizure of Aircraft from 1970 that established a principle of universal jurisdiction over aircraft hijackers...

And yet, over the years, states have managed to ignore or invert international laws on terrorism to the point where today terrorists are among the most protected groups of individuals in the world. Due to political sympathy for terrorists, hostility toward their victims, or fear of terrorist reprisals against a state that dares to prosecute terrorists found on its territory, states have managed to avoid not only applying existing laws against terrorists. They have also refrained from updating laws to meet the growing challenges of terrorism. Instead, international institutions and ‘enlightened’ Western states have devoted their time to condemning and threatening to prosecute the few states that have taken action against terrorists....

One of the reasons the international community has failed so abjectly to take reasonable measures to combat terrorism is because international terrorism as presently constituted is the creation of Palestinian Arabs and their Arab brethren. Since the 1960s, and particularly since the mid-1970s, Europe, and to varying degrees the US, have been averse to contending with terrorism because their hostility toward Israel leads them to condone Palestinian Arab terrorism against the Jewish state.

Until and unless the west comes to understand that its insane hatred of Israel – the country that serves as the west’s own forward salient against global terrorism – has been given traction by the international law and ‘human rights’ doctrine to which it so slavishly adheres, it will continue to write its own suicide note.

After reading you site, Your site is very useful for me .I bookmarked your site!