That ain’t what America is like today — and thank God for it.

In an attempt to dial down expectations for his administration, President-elect Barack Obama’s supporters have dropped much of the “messiah” talk.

No more talk of him being The One (Oprah), or a Jedi Knight (George Lucas), or a “Lightworker” (the San Francisco Chronicle), or a “quantum leap in American consciousness” (Deepak Chopra). Instead we have more humble and circumspect conversation about the man. Now he’s merely Abraham Lincoln and FDR and Martin Luther King, combined.

It’s a step down from divine redeemer, but you have to start somewhere. 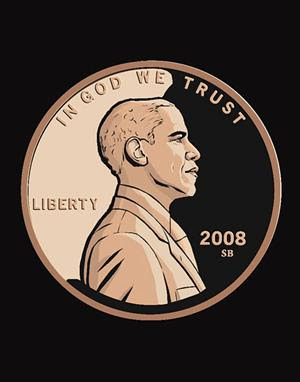 Newsweek, Time, the Washington Post, 60 Minutes and, of course, The O Network (formerly known as MSNBC) have all run wild with this stuff. Depicting Obama as FDR or Lincoln has become a staple of the self-proclaimed “objective” media.

I was on Fox News the other night to throw some cold water on this Obama-as-Lincoln stuff. Alan Colmes of Hannity & Colmes chastised me, asking if we shouldn’t give Obama “a chance to actually spread his wings and fly a little bit” before disparaging him.

Fine. I actually agree with that. Conservatives should not denounce Obama’s performance before he’s had a chance to, you know, perform.

But, shouldn’t we also hold off on comparing the guy to FDR and Lincoln before he’s done anything?

Obama hasn’t even taken the oath of office yet, and it’s already an unfair right-wing attack to say that Obama isn’t on par with Lincoln and FDR. What’s next? Will it be slander to say Obama’s a carbon-based life form? Will the Secret Service investigate you if you’re overheard saying you think Obama’s merely “OK”?

While such sycophancy from the national press is lamentable, at this point it’s hardly news.

What I find fascinating, however, is not so much the Obama hagiography, but the burning desire for another FDR or Lincoln that underlies it.

According to the various Obama-as-Lincoln narratives, including those from the president-elect himself, Obama is a new Lincoln because he is a “uniter.” In several of his most famous speeches, Obama insinuates that he wants to bring the country together the way Honest Abe did. Newsweek and others tout his fondness for Doris Kearns Goodwin’s book Team of Rivals, in which Goodwin argues that Lincoln displayed his political genius by inviting adversaries into his Cabinet.

There are real problems with this model; it didn’t work too well for Lincoln. Moreover, who looks at how Lincoln staffed his Cabinet as the defining feature of his presidency? Saying Obama is the next Lincoln because the two men share staffing styles is like saying George Bush is Thomas Jefferson because they both liked chicken soup. If I wear a pointy hat, can I call myself John Paul II?

Lincoln was Lincoln because he fought and won the Civil War and freed the slaves. News flash: That ain’t what America is like today — and thank God for it.

I think Lincoln was just about the greatest president in American history, but I sure don’t want to need another Lincoln. Six hundred thousand Americans died at the hands of other Americans during Lincoln’s presidency. Lincoln unified the country at gunpoint and curtailed civil liberties in a way that makes President Bush look like an ACLU zealot. The partisan success of the GOP in the aftermath of the war Obama thinks so highly of was forged in blood.

Likewise with FDR. Listening to liberals gush over a “new New Deal” and Obama’s call for us to emulate the “Greatest Generation,” you’d think they want another Great Depression and World War.

Indeed, liberals have long idolized the 1930s as a decade of great unity. It wasn’t. The 1930s was a miserable decade of poverty, domestic unrest, labor strife, violations of civil liberties and widespread fear. If liberals really loved peace, prosperity and national cohesion, they’d remember the 1920s or 1950s more fondly. And yet they don’t. Why? Because liberals didn’t get to impose their schemes and dreams on the country in those decades. Behind all the talk of unity and bipartisanship and shared sacrifice lies an uglier ambition: power. The audacity of hope behind all this Lincoln-FDR-Obama blather is the dream of riding roughshod over the opposition, of having their way, of total victory.

You know what I hope? I hope Obama is another Coolidge or Eisenhower. But I’m not holding my breath.

— Jonah Goldberg is the author of Liberal Fascism: The Secret History of the American Left from Mussolini to the Politics of Meaning and editor-at-large of National Review Online.
Posted by jtf at 9:15 AM