The Loss Of Individual Liberty 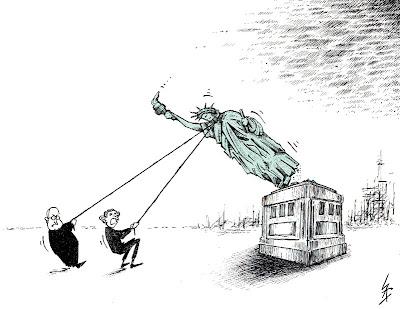 Over dinner with Milton Friedman several years before he died, I offered the great man a compliment. He refused it.

I had just re-read God and Man at Yale, the 1951 book in which William F. Buckley Jr., denounced the leftist attitudes he had encountered among the Yale faculty and administration as an undergraduate. Buckley singled out the department of economics as the most collectivist department on the campus. "Today," I said, "nobody would call the economics department at a major university 'collectivist.'"

Academia as a whole may have continued its long, sorry wobble to the left, I continued, but the economics profession had proved an exception, moving the other way. Departments of economics across the country now grasped the importance of free markets. "Mises, Hayek, Stigler and you," I told Friedman. "You've transformed the intellectual climate. You've won."
Friedman shook his head. "We may have won the intellectual battle," he replied, "but in practical politics, it's difficult to see that we've had any effect at all."

Government spending had continued to grow, he explained. After a pause during the Reagan years, regulations had once again proliferated. For a moment, Friedman grew silent. Then he looked at me.

"The challenge for my generation," he said, "was to provide an intellectual defense of liberty. The challenge for your generation is to keep it."
To tell you the truth, I doubted it. Only a couple of years earlier, Republicans had captured control of the White House and both houses of Congress for the first time since 1928. It might take them a while, I thought, but they'd get the problems in under control. Everything would be just fine.

Item: Since my dinner with Milton Friedman, a Republican president and Republicans in Congress--I repeat, Republicans--enacted a prescription drug benefit that represents the biggest expansion of the welfare state since the Great Society. They also indulged in a massive increase in discretionary domestic spending and passed the biggest farm bill in history, a massive transfer of resources to the 2% of the population still engaged in agriculture.

Item: In the campaign that just concluded, the GOP--again, I repeat, the GOP--nominated a man whose proudest legislative achievement was a campaign finance reform, the McCain-Feingold bill, that represented a direct assault on freedom of speech.

Item: During the campaign, the Republican nominee--again, the Republican--told voters that the federal government should "give you a mortgage you can afford" while attacking businesspeople as "greedy."

Item: Next week, the Democrats who now run Congress will ask the House and Senate to enact emergency aid to the auto industry, apparently with George W. Bush's approval. Where will they get the money, estimated to total to some $25 billion? From the $700 billion bailout that these same leaders promised just a few weeks ago would be devoted entirely to the banking industry.

Whereas a bailout for the financial system made a certain amount of sense--if the banking system had failed, the entire economy would have suffered--what sense can it make to bail out GM or Ford? Even if both companies ceased production altogether, Americans would simply purchase a somewhat different mix of automobiles, shifting, for example, from Fords manufactured in Michigan to Toyotas manufactured in Kentucky or Mississippi. Did the nation shudder when Studebaker went under? Did our economy suffer a mortal blow with the demise of American Motors?

Item: Democratic president-elect Barack Obama has proposed federalizing health insurance, a first step toward the "universal health care" he has long advocated. The federal government, in other words, now intends the nationalization of health care, an industry that accounts for 17% of our gross domestic product.

Item: The president-elect has also proposed refundable tax credits that represent direct cash grants from the federal government. As Daniel Henninger has noted, the Obama plan would "place some 48% of Americans ... out of the income tax system."

This would fundamentally alter the nature of citizenship itself. Almost half of all Americans would, in effect, have been made the recipients of a vast new entitlement. As that proportion grows, the nation would approach a tipping point.

All that the nation's founders understood two centuries ago about the imperative of limited government, all that we learned from the long struggle between collectivism and free markets during our own time--all this could soon simply evanesce.

I may not have seen it at the time, but Milton Friedman was right. The challenge for this generation is to keep our liberty. And the challenge is now upon us.

Peter Robinson, a research fellow at the Hoover Institution and contributor to RobinsonandLong.com, writes a weekly column for Forbes.com.
Posted by jtf at 8:18 AM