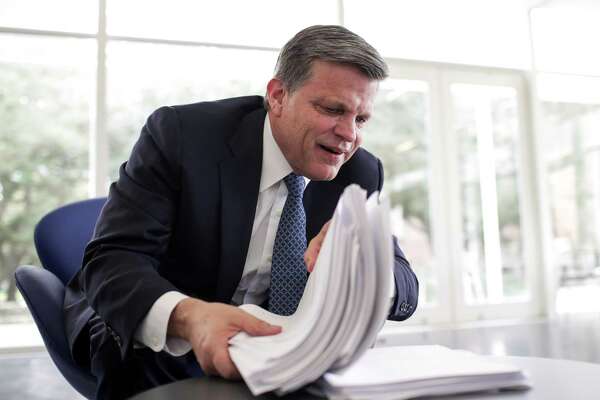 Douglas Brinkley with a stack of page proofs of his upcoming book on the American space program at Rice University February 12, 2019. (Jon Shapley/Houston Chronicle)

Douglas Brinkley sets down an anvil-sized pile of white papers on a table at Rice Coffeehouse and sighs.
He still has a boyish energy about him, though his eyes project a weariness that could be traced to his juggling of teaching , writing books and appearing as CNN’s official presidential historian.
He hands over the pile of paper.


“This one has been a giant for me,” he says. “I’m not 100 per-cent certain what I’ll be doing next, but it’ll probably be shorter than this.”
“This” is “American Moonshot: John F. Kennedy and the Great Space Race,” historian Brinkley’s new book. On one hand, it allowed him to do a lot of research close to his work at Rice University, where he’s the Katherine Tsanoff Brown Professor in Humanities. On another, the book runs more than 500 pages as Brinkley tells a very specific piece of the story of the historic Apollo 11 moon landing, which celebrates its 50th anniversary this summer.
Brinkley’s interest in Apollo 11 goes back to childhood. He was 9 when Neil Armstrong became the first man to set foot on the Moon. Brinkley recalls a particular fervor for the mission in his hometown of Perrysburg, Ohio, about 80 miles from Wapakoneta, Armstrong’s hometown.
“There were posters in all the store fronts,” says Brinkley, 58. “I collected plates for all the Apollo missions. He was my generation’s hero.”
Years later, when Brinkley was a history professor at Tulane, he sent two of his books to a post office box associated with Armstrong, hoping to land an interview with the reclusive astronaut. Armstrong’s administrative assistant turned down the request, but years later, in 2000, Armstrong agreed to do one oral history interview for NASA. And NASA asked Brinkley to conduct it.
“So in a way,” Brinkley says, “that got me started.”
Narrow focus
But Brinkley also was aware that scores of books about the Apollo program had been written, and with the anniversary of Apollo 11 coming, scores more would be coming. Much of his work also has had a particular focus on presidents, including volumes on the conservation movement and its connection to both Roosevelt administrations.
“There was never a book on Kennedy and the moon,” he says. “Partially because I’m here, I recognized that. I started to realize there’s a book on presidential leadership and the moon that hadn’t been investigated.”
Brinkley gestures westward toward the window of the coffee shop in the general direction of Rice Stadium, where Kennedy on Sept. 12, 1962 gave his famous “we choose to go to the moon” speech.
“It was a big moment,” Brinkley says. “There are great speeches in presidential history. And I’d rank Kennedy at Rice pretty high.”
In “American Moonshot” Brinkley traces Kennedy’s life and career back to establish cultural and generational differences between the president and other leadership of the era. Savvy about message, Kennedy saw space exploration as a way to distinguish himself from other politicians of his age. He also saw it as a potential legacy issue.
“So why would he put all his chips on the new frontier?” Brinkley says. “It was something that wouldn’t happen during his presidency. It cost the country a fortune. And he had to get bipartisan consensus. Look how hard it is to get $5 billion for this wall today. He got $25 billion, which is about $185 billion today. And so begins that journey.”
Space and militarization
Kennedy carries much of the narrative, though Brinkley also threads his story together with that of Wernher von Braun, a Nazi who developed rockets for Germany until the conclusion of World War II.
While Dwight Eisenhower had strong reservations about von Braun, Kennedy instead saw possibility. And he had a winning message about a space race with the Soviet Union, stoking American anxieties about the implications of falling behind the Soviets in development of a space program.
Brinkley says his book bears a subtext “about militarization,” and Kennedy’s cunning manner in disguising it.
“He used NASA as a civilian sugar-coated Cold War industrial military complex.”
And the program poured billions of dollars into the South: Virginia, Florida, Alabama and Mississippi. Texas, too, embraced its role.
“Look at an old Yellow Pages from 1962,” Brinkley says. “It’s space everything. Space Burger Drive-In, Astro Babysitters. You had the baseball team in ’62. The Rockets came here from San Diego in 1971. The architecture took on this space age look. It was a real era.”
And that era and its possibilities brought Kennedy to Rice to further sell his program.
“What Kennedy was selling was a football game,” Brinkley says. “’Why does Rice play Texas? Because it’s hard.’ You don’t care what the odds are. He believed in that. He believed in public discovery pulling the country together.”
But 14 months after that speech, Kennedy was dead. But his challenge to put a man on the Moon before 1970 would be met in his absence, and Brinkley charts its progress.
Back to conservation
With “American Moonshot” now in bookstores, Brinkley is taking a short breather. He was recently in Oklahoma with one of his sons for a basketball game, and went to the site of the 1995 bombing of the Alfred P. Murrah Federal Building.
“I thought about writing that one,” he says, “but there’s a lot of dark energy there. It’s a good subject, but I think I may punt.”
He believes he still has two books about the history of the conservation movement in the United States, through the prism of different presidents.
“Using a president in the title is attractive to people,” he says. “If it’s just an environmental book, you lost a lot of readers. I had to learn that the hard way.”
He thinks he’ll cap the series with the 2000 election.
“I think I’ll stop it with climate change,” he says. “Which is a newer thing more for contemporary biologists. I’ve been writing more about saving public lands, pollution laws. But who knows. If I live long enough, maybe I’ll pick up a more modern story. But not today.”
andrew.dansby@chron.com
Posted by jtf at 8:08 AM