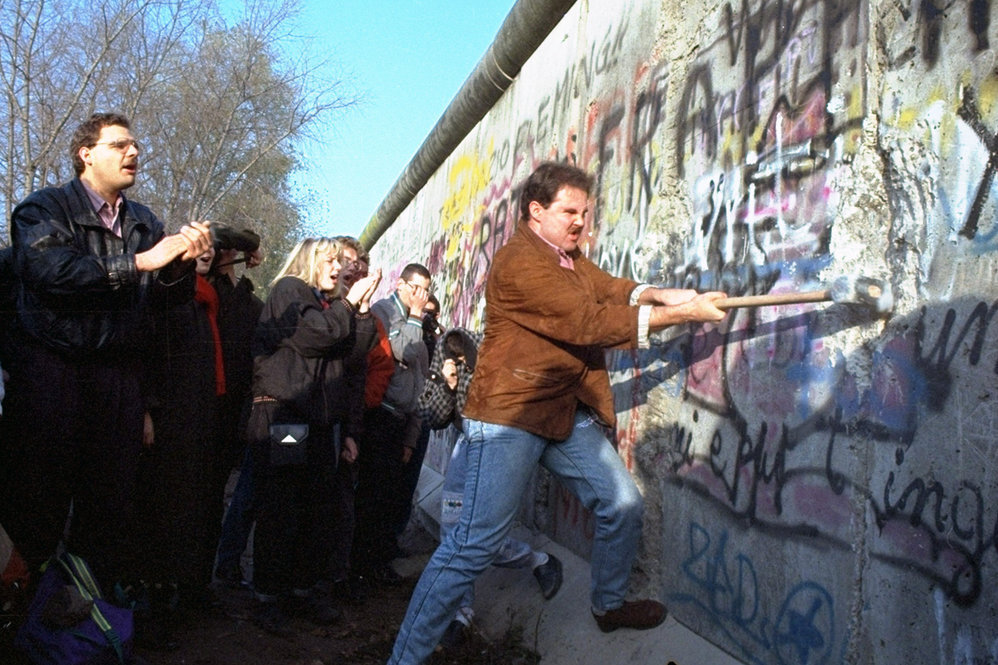 An unidentified West Berliner swings a sledgehammer at the Berlin Wall on November 12, 1989.
(John Gape III/AP)


This summer I found myself watching the European Athletics Championships in the Olympic Stadium in Berlin. It was a wonderful, friendly occasion in a wonderful, friendly city, but the historical resonances of athletics in that venue were impossible to miss. Famously this was the venue of the 1936 Olympics, presided over by Hitler, and the place where the Führer was humiliated by the brilliant African-American athlete Jesse Owens. The stadium remains virtually unscathed despite the second World War, so it does not take much imagination to visualise Hitler standing on the balcony specially designed so that he could be seen from every seat in the house.
That kind of historical reverberation is a driver in this new history of postwar Europe by Ian Kershaw. Contemporary Europe, and Germany in particular, remain haunted by the past – always looking over their shoulders in fear that history will repeat itself. “The inhumanity of the recent past,” he writes, casts “a deep shadow over Europe.”
Kershaw says this is the “hardest book” he has ever written. In part, that is because, unlike the previous war-dominated volume, To Hell and Back: Europe 1914-1945, “no straightforward linear development adequately describes the complexity of European history since 1950”. The new period is less obviously dramatic. In fact, everything about the outward appearance of this book suggests it’s going to be a clunker. The cover is literally beige and has no illustration. The title Roller-Coasterpromises a few lame amusement-park thrills but no actual jeopardy (unless you’re very unlucky). In fact, the publishers seem to have gone out of their way to suggest that the book’s primary audience will be reluctant undergraduates taking a dreary compulsory module in postwar European history.
That’s a shame, because this fine book, while not as obviously thrilling as Tony Judt’s earlier Postwar (2005), has a number of interesting things to say. Kershaw is the pre-eminent contemporary biographer of Hitler and brings a deep hinterland of scholarship to his detailed analysis. He writes elegantly and without jargon, which these days is rarer than it should be.
Real-time Drama

With so many challenges for the architecture of the book – geography, identity, political systems, globalisation – Kershaw surely makes the right decision to tell the story chronologically, which allows readers to see complexity and drama emerging in real time. The major thread that runs throughout is the centrality of Germany.
“Despite its destruction as a nation state at the end of the second World War,” Kershaw writes, “Germany has remained at the heart of Europe’s development – central to postwar economic recovery, central to the Cold War, central to the ending of the Cold War, central to widening European integration, central to the creation of the Euro, central to the crisis of the Eurozone, central to the migration crisis, and central to the still-embryonic steps to the reform of the European Union after its recent serious travails.”
It is Germany, he concludes, that has become the “vital pillar of stable liberal democracy, it presides over Europe’s strongest economy, has overcome forty years of division to attain national unity, and has reluctantly acquired the mantle of European leadership.”
That emphasis on Germany inevitably means a shift away from a narrative of postwar history that places the Anglo-American alliance at its centre. We might easily point to the establishment of Nato (essentially the creation of Ernest Bevin and the 1945-51 British Labour government) or the relationship between Ronald Reagan and Margaret Thatcher as more important factors in fighting and winning the cold war than anything West Germany did during that long conflict. But Kershaw is scathing about the “triumphalist” Thatcher; much more to his taste is her contemporary, the German chancellor Helmut Schmidt, whose “expertise and judgement had been invaluable – and not just to his own country.”
As the book moves towards the post-cold war era, so its analysis becomes more obviously political. Kershaw sees neoliberalism failing everywhere. The benefits of globalisation come “at a very considerable cost”, not least in wealth disparity. A “new proletariat” has emerged, angry at the filthy rich and resentful of the “reservoir of immigrant and transient labour” that undercut them from below. The war in Iraq further undermines public trust. By the time of the financial crash of 2008, a world order that “had long been presumed intact and solid seemed all at once to be crumbling.”
Brexit and Trump

Brexit and the election of Donald Trump in 2016 served to confirm that “liberal and democratic values, long fought for, were under challenge.” Gloomily Kershaw concludes that Europe is now “in a fragile state, facing lasting uncertainty and insecurity – greater than at any time since the aftermath of the war”. Thus Roller-Coaster ends on a less “positive note” than To Hell and Back, as in 1949 the “signposts to a brighter future” had been “plainly visible”.
Aside from the laughable idea that the half of Europe living behind the Iron Curtain would have found life better in 1949 than today, it seems odd that Kershaw is so willing to let the institution running modern Europe off the hook. He is not uncritical of the European Union, but neither does he confront head-on the role that the EU has played in undermining the very ideals it purports to serve. Not least of these issues surrounds the social contract and the nature of democracy itself. Even its most vigorous supporters would not claim that the EU is a democratic entity. But the extent to which Brussels is responsible for the rise of populism and quasi-authoritarianism within its borders, or indeed the economic and human distress suffered by countries such as Ireland and Greece during the crash, goes unanswered.
Brexit next year will bring these issues into sharp relief as the up and down ride continues. Personally, roller-coasters always make me sick. Hopefully Europe has a stronger stomach.

Richard Aldous teaches history at Bard College, New York, and is the author most recently of Schlesinger: The Imperial Historian. He is speaking at the Kennedy Summer School in New Ross, Co Wexford, in September
Posted by jtf at 8:04 AM