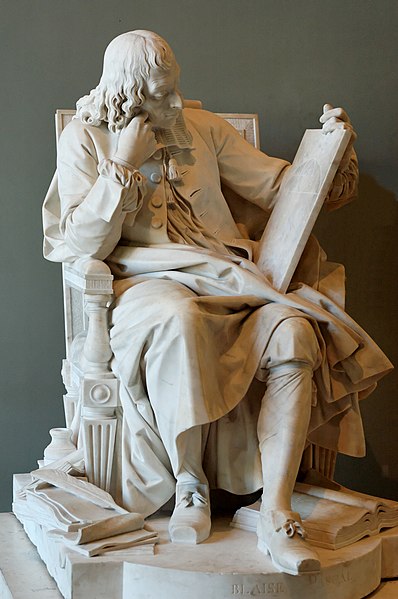 Blaise Pascal (1623–1662) studying the cycloid, engraved on the tablet he is holding in his left hand; the scattered papers at his feet are his Pensées, the open book his Lettres provinciales. (Louvre)

I had a long late breakfast this morning with a Catholic friend, a native of Baton Rouge who now lives in New England, but is in town visiting his family. When we sat down at the restaurant, I mentioned to him that I had seen this tweet from a very solid Catholic priest friend:

Gospel today: can we please stop talking about sharing the loaves? Instead: mountains and theophanies, new Moses, Passover meal, new Exodus, anticipation of eschatological banquet, sacrifice of the lamb, kingship of Jesus, miracle vs sign, all acceptable alternatives.

Twitter Ads info and privacy
https://platform.twitter.com/widgets.js
To which I had responded (on Twitter) by quoting part of Blaise Pascal’s note at the end of a late-night mystical vision in 1654. Here is the entire quote from Pascal, for whom this vision occasioned a deeper conversion:

FIRE.
GOD of Abraham, GOD of Isaac, GOD of Jacob
not of the philosophers and of the learned.
Certitude. Certitude. Feeling. Joy. Peace.
GOD of Jesus Christ.
My God and your God.
Your GOD will be my God.
Forgetfulness of the world and of everything, except GOD.
He is only found by the ways taught in the Gospel.
Grandeur of the human soul.
Righteous Father, the world has not known you, but I have known you.
Joy, joy, joy, tears of joy.
I have departed from him:
They have forsaken me, the fount of living water.
My God, will you leave me?
Let me not be separated from him forever.
This is eternal life, that they know you, the one true God, and the one that you sent, Jesus Christ.
Jesus Christ.
Jesus Christ.
I left him; I fled him, renounced, crucified.
Let me never be separated from him.
He is only kept securely by the ways taught in the Gospel:
Renunciation, total and sweet.
Complete submission to Jesus Christ and to my director.
Eternally in joy for a day’s exercise on the earth.
May I not forget your words. Amen.

Then, at the end of the account, when all were satiated, Jesus asked His disciples to gather the pieces left over, so that nothing would be wasted. And I would like to propose to you this phrase of Jesus: “Gather up the fragments left over, that nothing may be lost” (v. 12). I think of people who are hungry and how much leftover food we throw away . . . Let each one of us think: the food that’s left over at lunch, at dinner, where does it go? In my home, what’s done with this leftover food? Is it thrown out? No. If you have this habit, I give you advice: talk with your grandparents who lived after the War and ask them what they did with leftover food. Never throw away leftover food. It’s re-heated or given to someone who can eat it, who is in need. Never throw away leftover food. This is advice but also an examination of conscience: what is done at home with leftover food?
Let us pray to the Virgin Mary, so that in the world programs dedicated to development, to supplies, to solidarity prevail and not those of hatred, of armaments and of war.

That’s the end of his six-minute homily, but it gives you the gist. If you want to listen to the whole thing, it starts shortly after the 3:00 mark, and the concluding passage above begins about 8:30: