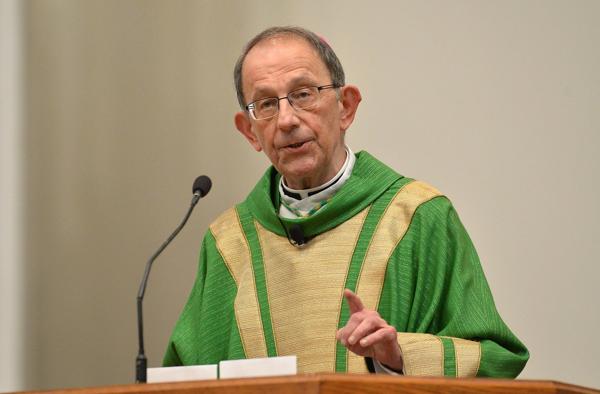 Erie Catholic Bishop Lawrence T. Persico, who like other bishops in Pennsylvania has read a grand jury report on child sex crimes in the Catholic Church, warns that the report will name former bishops (PennLive.com)

Breaking news out of Pennsylvania: the state Supreme Court has ordered the release next month of a 900-page grand jury report that will discuss more than 300 “predator priests” in six of the state’s eight Catholic dioceses.
According to PennLive.com:

The findings, which exceed 800 pages, are widely expected to expose decades-old abuse of children at the hands of priests in the dioceses of Harrisburg, Pittsburgh, Allentown, Scranton, Erie and Greensburg.


The report is sealed, and it’s not yet known what time period it investigates. In Pennsylvania, victims of child sex abuse have until they are 30 to file civil suits and until they are 50 to file criminal charges. The criminal age was extended in 2008 from age 30.
The grand jury report is investigative in nature and does not recommend charges of any kind against anyone. However, prosecutors can choose to file charges.

Think of it: over three hundred predator priests. Is there any time period under which a number like that could be adequately leavened. My God.
National Review‘s Michael Brendan Dougherty, who has become must reading since the McCarrick scandal broke, is on fire:

300 predator priests and we’re jut talking about 3/4 of the diocese in 1 US state.

The seminaries don’t need another visitation from Rome, they need to be raided by the FBI. Then they should be burned and salted.


Nathan Brittles@nathan_brittles
Replying to @michaelbd
We will be tested by the enormity of this. It has only begun. 300 is only the beginning. Big names.


https://platform.twitter.com/widgets.js
Meanwhile, Catholic blogger Rebecca Hamilton, reflecting on McCarrick, pays tribute to Gov. Frank Keating, whom the US Catholic bishops named to head their National Review Board in the wake of the 2002 scandal — and who quit in disgust. Excerpt:

If ever there was a marriage NOT made in heaven, it would be former Governor Keating and the bishops. It was obvious to anyone with half a brain that a good number of these bishops were guilty of extensive criminal behavior, and that they almost had to be sexual predators of some sort themselves. Normal moral people can’t do what they did and live with themselves afterwards. Someone who is really a Christian wouldn’t have been able to keep on harming children like this. The Holy Spirit would have convicted them of their sin and they would have had to stop.
The fact that they had kept on and on and on, doing this to children, and were so completely arrogant and unrepentant, said it all. At least some of the bishops were hardened sexual predators who gave every evidence of being sociopaths. That was obvious from the facts.
Needless to say, the whole thing blew up. Before long, Governor Keating had resigned his position, declaring that the bishops behaved “like Cosa Nostra.”
Here is what he said in his resignation letter:

My remarks which some bishops found offensive, were deadly accurate. I make no apology. To resist grand jury subpoenas, to suppress the names of offending clerics, to deny, to obfuscate, to explain away; that is the model of a criminal organization, not my church.
Church officials, and several of the people who served on the committee with Governor Keating denied his charges.

The sex abuse crisis in the Catholic Church has become a sore that won’t heal, a bowl of soup that won’t empty, an unending series of revelations and betrayals that slash across the claims that the priesthood makes about itself like a knife. The latest installment is, of course, the revelation that none other than Cardinal Theodore McCarrick himself is a sexual predator, and that lots of people inside the Church knew it for a very long time.
It would have been a lot easier on all of us if we’d just believed Frank Keating, back in the day. I can say that because I did believe him. I knew he was telling the truth.

Read the whole thing to see why Hamilton believed Frank Keating from the get-go. It’s powerful stuff.
All those children. All those families. All those Catholics who trusted that they were being led by men of God.
After the grand jury report comes out, and reporters eventually uncover Cardinal McCarrick’s own sleazy network, it’s going to be hard to see how the US Catholic bishops recover any kind of reputation. Maybe they will, but this is hideous, hideous material.
Meanwhile, look at what Cardinal Tobin’s people are doing to Philly-based church chronicler Rocco Palmo, in an attempt to distance the Newark prelate from his advocate Uncle Ted: 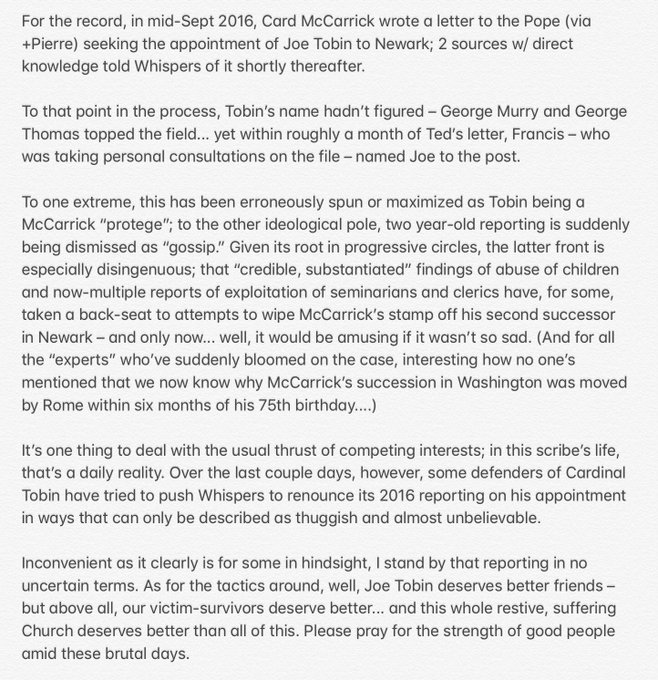 Per Whispers op, June’s credible finding of abuse of a minor by Card McCarrick is now under added probe by CDF – a first in the case of a cardinal... given other noise around of late, meantime, all this likewise needs be said:

Here is how little the first steps of this million mile journey are. And it’s amazing how singular such simple things seems:
http://www.goerie.com/news/20180727/redacted-report-on-erie-diocese-others-to-be-released-in-august
Scroll down for Bishop Lawrence Persico’s remarks. He has been leading the charge for disclosure. He was first to commit to not objecting to the release of the report, and forced the other bishops to follow suit. But notice that here is being even MORE specific, which calls out the others for potentially using back door means to fight disclosure:
In his most recent comments on the case, Persico on Thursday said that the Erie diocese will in no way support any objections to the report. He also said, in a statement, that, “I reiterate that I have neither directly nor indirectly taken any steps to block its release.”
“In addition,” Persico said, “I have instructed that no funds, resources or personnel of the Diocese of Erie be used to block the release of the grand jury report. The diocese is not paying for, reimbursing or assisting any effort by any entity or individual to seek a stay.”
“My primary focus remains on victims, who await this important opportunity to be heard,” Persico also said.
We are not objecting to release. And no, we aren’t paying others to object. And no, I am not instructing lackeys to pay others to object. And no, we aren’t assisting others in their objections. And no, there is not a separate 501 c 3 that has been launched to object. And by the way, the report SHOULD be release, as awful as it is.
At the very least, at least some people seem to understand the monumental task at hand, and have at least decided to stop digging deeper into the muck. Doesn’t make it any easier to climb out. But man, at least come to terms with the fact that the shit show is coming to an end, and you better prepare for the reckoning. There is not hiding from it. Persico, in my mind, deserves recognition for at least taking that first step.

I used to be a chaplain at the sex offenders unit at the state prison in Arizona. While there, we had something of a revival start, with 150 out of 900 men eventually requesting to come to chapel services.
Along the way, I had a large number of Catholic inmates request permission to come, too. (In AZ, Catholics are listed separately from other Christians for religious designation.) A number of them told me that they wanted to confess their sins, but that the diocese wouldn’t send them a priest to minister to them. They also had no priest for other services, only laymen sent with previously blessed hosts. One longtime resident said that he hadn’t seen a priest for many years.
They asked if I (a high church Protestant) would hear their confessions and let them come to church at my services. I explained that the Roman Church wouldn’t consider what I did true ‘confession’in a sacramental sense, but that I was perfectly happy to hear their confessions and (given true repentance) assure them of God’s forgiveness.
They were delighted. A surprising number expressed desire to do this.
Shortly thereafter, I was called into my supervisor’s office and told to stop it, as the local diocesan bishop had written a nasty letter to the prison complaining about me.
I then had to tell the Catholic inmates that I was disallowed to continue to serve them. But still no priest was sent.
After a while, a few inmates came and told me that they knew what happened. What was it? They said that one of the inmates (who obviously disliked me) was a Catholic priest. A pedophile. A serial abuser. (Indeed, I later found out that a woman I knew in town was the sister of one of his victims.) And this priest was still a priest, even in prison, even with his crimes. They believed that the reason no other priests were sent to them was because he was there. After all, why should another priest be sent when he was present to hear their confessions? He had complained about me to his bishop, which had led to the complaint against me.
Disgusted, and protective of the spiritual wellbeing of my inmates, I confronted him. He was arrogant, smug, and rude to me. He was also one of the most spiritually dark presences I’ve ever encountered. I told him that he needed to repent of his sins, to turn to God, and to leave the other inmates alone.
Shortly thereafter (within a month), I was terminated by the state prison over the objections of the Warden and the head of security, who both spoke glowingly of me.
I’ve always wondered if there was a connection. Reading the report about Gov. Keating’s comparison of the Roman Church to Cosa Nostra, I’m wondering about it again.