Why Rick Santorum can resonate with those who hear him. 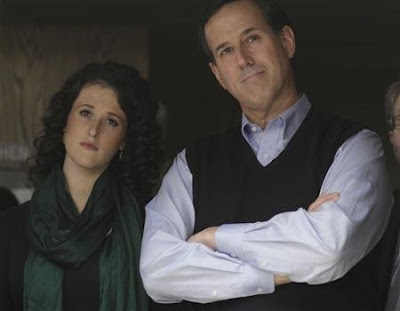 Rick Santorum waits to be introduced as he stands with his daughter, Elizabeth, in a kitchen before campaigning in Orange City, Iowa, January 1, 2012. (REUTERS/John Gress)

Americans are “looking for a president who believes in them,” Rick Santorum said on the first day (and probably close to every day) of his primary campaign for the Republican nomination for president.

It’s an all-American message that gets lost among both political parties. Most obviously, it is poised as the polar opposite of the message sent in 2008 by Barack Obama, who presented himself as Change You Can Believe In. And most Americans who did believe in Obama now feel a deep disappointment, one that Santorum is seeking to tap into. But the message sent by many of the Republicans in this year’s race is not much better. Consider, for example, the intraparty derision of the richest guy in the race, Mitt Romney, because of his financial success — unhealthy criticism of someone who has demonstrated a work ethic of the type we’d be wiser to admire, of a faithful family man who has chosen public service instead of resting on his business laurels.

Santorum’s late surge in the run-up to the Iowa caucuses is both well-earned and ironic. He has been laboring tirelessly in all counties of the state. And despite his conservatism, which plays well with conservative caucus-goers, he is, in many ways, just what voters — Tea Party, Occupy Wall Street, and everyone in between who just goes to the polls — seem to uniformly recoil from: a Washington insider.

He did, after all, serve 16 years in Congress, first in the House and then in the Senate. And he has worked at a Washington think tank (one of my faves, the Ethics and Public Policy Center). But his sweater vests (which have taken on a Twitter account, if not a life of their own, in political-primary history) and his words about policies that empower working families and don’t leave the poor out in the cold — or perpetually dependent on an unsustainable state — point to the kind of genuine populist style that resonates with people.

And while the most radical left-wing activists on certain social issues love to paint him as harsh, there’s a compassion to his words and the causes he takes up. As anyone who has ever made the mistake of Googling his name knows, Santorum has been caricatured for decades, but his message is far from severe. Take, for instance, his public profession of faith. “We want leaders who understand that faith is essential to the sustenance of democracy,” he told me earlier this year, “that faith is an agent for good, that it protects the weak and defenseless, that it motives people to confront injustice.”

Leaders, in other words, who do not put Catholic Charities in Illinois in the position of having to choose between violating their principles and closing up shop because fundamental institutions have been redefined in the name of a tolerance that refuses to tolerate. Leaders who don’t compel taxpayer funding of abortion. Leaders who respect the conscience rights of voters.

On the Feast of the Holy Innocents, New Yorkers prayerfully gathered at a church by that name to pray for the conversion of the hearts of political leaders; to pray for young, scared mothers to have the courage to seek out help and support to bring their children into the world and provide for them, whether through adoption or by raising them themselves; to pray for the healing of those who have been hurt by abortion; and, yes, to pray for the lives of the unborn. This isn’t a militant message but a loving one, even as its advocates feel an urgency — one that sees right and wrong, but also sees pain and confusion.

This is in large part the message that Rick Santorum and his family carry with them. With his eldest daughter taking time off from college to work on the campaign, and with the constant source of inspiration provided by the determination of his youngest, Bella, to go on living despite being diagnosed as “incompatible with life” more than three years ago, he brings a message about happiness, restoration, and healing in our lives and our culture. About the fullness of freedom and its preservation.

Santorum has the wisdom of one who sees a fuller picture than just one campaign or strategy. This is on display most obviously, perhaps, when he is schooling Ron Paul on foreign policy and our obligations to our nation’s defense and our allies. Buoyed by this wisdom, Santorum projects a self-confidence that is not paternalistic. He exudes a belief in whatever he is speaking of. He has the air of authority that comes with experience. And he shows the refreshing authenticity of a guy who is a happy father and husband, and whose sacrifice in spending time away from home is apparent rather than an under-the-radar afterthought.

And even though he is ridiculed for being a culture warrior, he is not naïve about politics. My Facebook page experienced fireworks the other day when he was blasted as a “pro-life fraud” for some prudential endorsements over the years, the kind that one can agree or disagree with but that suggest some appreciation for forming alliances in an imperfect world — for governing.

His is the confidence of a man for whom experience has helped feed optimism — the realistic sort that comes with knowledge of something greater than oneself and one’s campaign, even than one’s exceptional nation. As someone who has worked with him puts it: “He is a man who simply loves his work, without an ounce of cynicism. And I’ve never heard him say ‘no’ to a request, schedule permitting. If it can be done, he wants to do it.”

We are not the ones we have been waiting for. Nor is Rick Santorum. Which is precisely why he wakes up every day and works, and why many Iowa voters see in him something of what they’d like to see (again) in Washington.

— Kathryn Jean Lopez is the editor-at-large of National Review Online. This column is available exclusively through United Media.
Posted by jtf at 11:28 AM