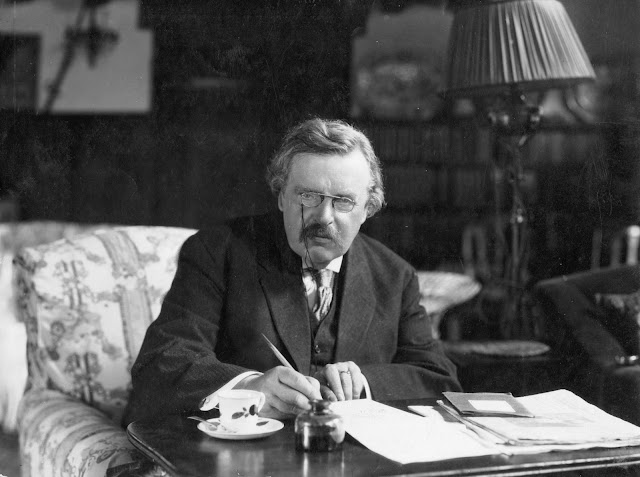 Chesterton's reputation as one of the key figures in Christian literature during the 20th century is linked inextricably with the concept of "orthodoxy." His book of that title, published in 1908, was, according to Wilfrid Ward, a major milestone in the development of Christian thought.

Wilfrid Ward was certainly not alone in his flattering praise of Chesterton's book. Its influence on the intellectual development of a whole generation was summed up by Dorothy L. Sayers. She had first read Orthodoxy as a schoolgirl when her faith had been threatened by adolescent doubt. In later years she confessed that its "invigorating vision" had inspired her to look at Christianity anew, and that if she hadn't read Chesterton's book she might, in her schooldays, have given up Christianity altogether. "To the young people of my generation," Sayers wrote in 1952, "G.K.C. was a kind of Christian liberator."

In stressing firm and fixed foundations for the concept and teachings of Christianity, Chesterton had turned "orthodoxy" into a battle cry — a rapier-sharp reply to the heresies of the age. His approach would be hugely influential on C.S. Lewis, and there are obvious and unmistakable parallels between Chesterton's populist approach to "orthodoxy" and Lewis's "mere Christianity."

There is also a clear similarity between Chesterton's approach to orthodoxy and that of T. S. Eliot. In Notes Towards the Definition of Culture, Eliot captured the spirit of the Christian literary revival of which he and Chesterton were part in his last appeal . . . to the men of letters of Europe, who have a special responsibility for the preservation and transmission of our common culture . . . we can at least try to save something of the goods of which we are the common trustees; the legacy of Greece, Rome and Israel, and the legacy of Europe throughout 2,000 years. In a world which has seen such material devastation as ours, these spiritual possessions are also in imminent peril.

For Eliot, and for Chesterton, this inheritance was not merely something old-fashioned which could be shrugged off and discarded in favor of new fads. It was a sacred tradition, the custodian of eternal verities which spoke with inexorable authority to every new and passing generation. The beauty of great literature resided in its being an expression of a common culture which was itself the fruit of the preservation of learning, the pursuit of truth, and the attainment of wisdom. The highest function of art, therefore, was to express the highest common factors of human life and not the lowest common denominators — life's loves and not its lusts. This was the mindset at the very core of the literary revival of which Chesterton was part.

In the wake of the publication of Orthodoxy, he was no longer tolerated as a young and precocious writer, but was considered provocative and a threat to the agnostic status quo. Chesterton was acutely aware of this change of attitude:

Very nearly everybody . . . began by taking it for granted that my faith in the Christian creed was a pose or a paradox. The more cynical supposed that it was only a stunt. The more generous and loyal warmly maintained that it was only a joke. It was not until long afterwards that the full horror of the truth burst upon them; the disgraceful truth that I really thought the thing was true . . . Critics were almost entirely complimentary to what they were pleased to call my brilliant paradoxes; until they discovered that I really meant what I said.

It says something about the scintillating cynicism of our age that, in the eyes of his contemporaries, Chesterton's greatest sin was his sincerity. This thought was certainly in Chesterton's mind in the months following the publication of Orthodoxy, and was one of the principal inspirations behind his novel, The Ball and the Cross, published in February 1910. "The theme in Mr Chesterton's new novel," wrote a reviewer in the Pall Mall Gazette, "is largely the same that he treated in Orthodoxy . . . the story is concerned with the effort of the two honest men to fight a duel on the most vital problem in the world, the truth of Christianity."

Although the truth of Christianity may have been the novel's object, its subjects were two men — one a Catholic, the other an atheist — whose sincerity scandalised their cynical contemporaries. There is little doubt that Chesterton had intended the novel as a light-hearted, entertaining response to those who had criticised his defense of Christianity in Orthodoxy. It was also a thinly disguised parable on his relationship with George Bernard Shaw, one of the literary figures discussed by Chesterton in his earlier book, Heretics. Like the two adversaries in The Ball and the Cross, Chesterton and Shaw disagreed passionately on most of the issues of the day but remained good friends. Their relationship was a living embodiment of the command to "love thine enemy."

If Chesterton's Orthodoxy had been born out of debates with "heretics" such as Shaw, his other great work of Christian apologetics, The Everlasting Man, would be born out of a protracted and bad-tempered debate between Hilaire Belloc and H.G. Wells. Initially, Belloc had objected to the tacitly anti-Christian stance of Wells's Outline of History, which had given less space to Christ than to the Persians' campaign against the Greeks. Yet Belloc's principal objection was the materialistic determinism that formed the foundation of Wells's History, which prompted him to write a series of articles exposing Wells's errors.

Ronald Knox was "firmly of the opinion that posterity will regard The Everlasting Man as the best of his books," a view echoed by Evelyn Waugh, who wrote that Chesterton was "primarily the author of The Everlasting Man," which he described as "a great, popular book, one of the few really great popular books of the century; the triumphant assertion that a book can be both great and popular."

Lewis, of course, would go on to become arguably the most influential Christian apologist of the 20th century, with the possible exception of Chesterton himself. The fact that he owed his own conversion to Christianity in large part to Chesterton is a living testament to the latter's enduring importance.

Yet the importance of Chesterton to the subsequent development of the Christian literary revival goes much deeper. He influenced the conversion of Evelyn Waugh and inspired, at least in part, the original conception of Brideshead Revisited. He indirectly influenced the conversion of Graham Greene following discussions with his future wife who had previously converted through the avid reading of Chesterton's books. He had nurtured to full recovery the ailing faith of both Ronald Knox and Dorothy L. Sayers during periods of adolescent doubt. This, in itself, would constitute a laudable testament to Chesterton's importance. Yet even this only tells a tiny part of the story, the tip of the evangelical iceberg. How many others, less well known, have had their faith either restored or germinated by Chesterton's genius and his genial expositions of orthodoxy?

Dr. Barbara Reynolds, friend and biographer of Dorothy L. Sayers, has described the interchange and interplay of ideas between Christian writers as a network of minds energizing each other. In this network of minds few have done more "energizing" than Gilbert Keith Chesterton.

Lay Witness is a publication of Catholic United for the Faith, Inc., an international lay apostolate founded in 1968 to support, defend, and advance the efforts of the teaching Church.

THE AUTHOR
Joseph Pearce is a full-time writer who grew up in East London and now lives in Norfolk, England. His book, Literary Converts (Ignatius Press, 1999), inspired this ten-part series which focuses on some of the leading writers at the forefront of the Catholic literary revival in the 20th century. This is the fourth installment. Joseph Pearce is also the author of Tolkien: Man and Myth, Old Thunder: A Life of Hilaire Belloc, C. S. Lewis and the Catholic Church, J. R. R. Tolkien's Sanctifying Myth: Understanding Middle-Earth, and Solzhenitsyn.