And the Winner in Iowa Is… Rush Limbaugh! 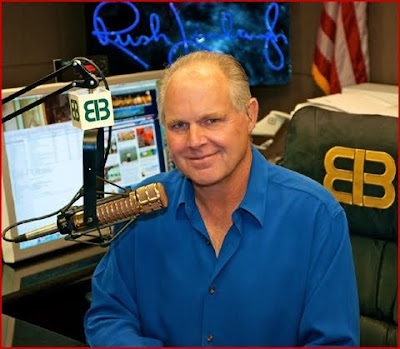 At the time of this writing, one Eastern hour into January 4th of 2012, Rick Santorum is barely ahead in the Iowa caucuses with 29,968 votes to 29,964 for Mitt Romney. Iowa is not known for its consonance, but this kind of multiple avowal is unprecedented.

My home state of Florida has decided to freeze tonight in solidarity with Iowa, so this is somewhat akin to an on-the-scene report. Manning my media control center, I observe that Santorum is enjoying a honeymoon with the press that is certain to be limited to a one-night stand.

In the moment, all the correspondents are buzzing affirmatively, with the merest hint of a caveat: "Santorum peaked just at the right time… he was the last man standing… he won the game of musical chairs… he visited all 99 counties… he did 367 Town Halls… door to door… retail politics… for now he gets to be the anti-Romney… social conservatives… evangelical vote coalescing… probably not sustainable… not enough cash on hand… doesn't have the national network."

By morning, they will shake off their hangovers and try to change the channel, adjusting the narrative. The Tea Party was not much of a direct force in Iowa, but its aura will be invoked in trying to portray Santorum as the new incarnation of Sharron Angle and Christine O'Donnell. Once again, the forces of narrow-mindedness, mean-spiritedness and wrong-headedness had won a Pyrrhic victory. Richard-the-Lionhearted of tonight's proclamation will give way to Poor Richard in tomorrow's almanac.

For now, there is much talk of the hard work, the doggedness and the good timing. His virtues are being paraded even though their ticker will quickly run out of tape. But there is one piece of the saga that even these erstwhile enthusiasts will not verbalize, the fact that the biggest winner of all this night is Rush Limbaugh. That is because Santorum breached the First Commandment of Republican political consultants: Thou Shalt Not Take the Name of Limbaugh in Advertisement.

This has been one of the great anomalies of Republican politics the past two decades. The revolution in talk radio initiated by Limbaugh in 1990 is what gave conservative politics new life after Ronald Reagan's tenure in office elapsed. Reagan himself acknowledged as much, writing a letter to Limbaugh in 1992 essentially passing the baton of leadership.

Despite the fact that Republican candidates have always vied to get some air time on the show, the political consultants they hire have steered them away from quoting Limbaugh by name in other venues or using his name in advertising. The fact that he generally refrains from openly endorsing particular candidates has enabled them to get away with this brand of disloyalty. They can't very well be expected to cite him in an ad if he has not specifically expressed his backing, can they?

Thus the paradox. Five minutes on Limbaugh is worth more than all the campaign ads put together, yet mentioning him in a commercial is seen by campaign managers as taboo. It will anger the independents, they say, and the moderates… and the women… and the minorities… and on and on.

The consequence of this strategy is that we wind up with colorless compromisers like Bob Dole and John McCain as Presidential candidates, and elections are written off as losses before the first lever is pulled in the voting booth for a Republican or in the mortuary for a Democrat.

This time Santorum broke the mold. He ran a bold ad quoting accolades tossed in his direction by Sarah Palin, Mike Huckabee, and Rush Limbaugh. That willingness to name names sent a powerful signal, electrifying the fence that most Iowa Republicans had been sitting on. There are an awful lot of conservative voters who have been waiting a long time to hear their heroes acknowledged. In my estimation, that single advertising spot put Santorum over the top in Iowa.

Can Santorum actually win the primaries pursuing this strategy? Well, the first bit of good news came along right away. The word is out that John McCain is about to announce his backing for Romney. This is a contest I will relish watching: Romney ads citing McCain versus Santorum ads citing Limbaugh. Stay tuned.


- Jay D. Homnick, commentator and humorist, is a frequent contributor to The American Spectator. He also writes for Human Events. Here he performs his original composition, "Buy You (Bayou) a Drink".
Posted by jtf at 6:42 AM