Press Pass: Jason and The Scorchers 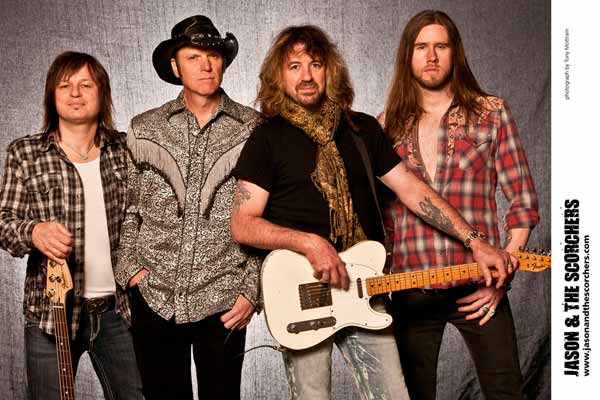 When the hard-rocking country outfit Jason and The Scorchers were looking for a place to celebrate their 30th anniversary - and ring in the New Year - it made sense to go back to where it all began.

"Our first real show was 30 years ago in Nashville," frontman Jason Ringenberg said of the group, first formed in 1981. "So we thought we should do it back in Nashville, of course. It's our hometown, and there are a lot of good vibes here for us."

The Nashville show will be the basis for an upcoming DVD.

"Doing it in our hometown made it much more exciting," Ringenberg said of chosing to record that performance for the DVD. "It just seemed like the right thing to do."

While the DVD is focused on the band's 30th anniversary, it won't be a sweeping historical look back at the band's three decades of music-making, Ringenberg said, adding that the footage will show how the group and its fans celebrated the milestone and brought a close to 2011.

Their anniversary tour, several dates lined up this winter which will see the band perform Thursday at Iota Club and Café, is a celebration in itself.

"We don't play as much as we used to, so just to be out and playing is something special for us, and special for our fans, I hope," Ringenberg said. "We just want to show that the band is still capable of delivering good shows, and that it is still a viable musical entity, creating new music and moving forward."

In that vein, the band will be performing from the long catalog that fans have come to appreciate, but will be focusing on songs from the group's latest record, 2010's Halcyon Times.

The record, a punk-rocking romp which again sees the band finding the middle ground between aggressive rock and roll and twanging country and blues, ended a 14-year hiatus from the recording studio.

"It was very exciting to be creating with the band again," Ringenberg said, explaining that the break from recording came in part because of Ringenberg's outside projects - like performing as his children's music character, Farmer Jason - but also because lineup changes in the band left its remaining members with the struggle of filling those roles.

With the addition of bassist Al Collins and drummer Pontus Snibb in 2008, Ringenberg and longtime guitarist Warner E. Hodges had found the final Scorchers.
"They really have a good understanding of what the band is about," Ringenberg said of the new members. "They are good roots rock and roll kinds of guys, and they can really rock like crazy. It's American roots music, but you have to rock like the devil - that's what the band is all about."

Band members coming and going has been a constant for the band, since its inception as Jason & the Nashville Scorchers. While some may look back to the mid-80s glory days when the band members were praised for being alternative country innovators, Ringenberg believes the current lineup rivals the Scorchers that once were.

"I think this is as good as the vintage band was," Ringenberg said. "Certainly, I think we play better than we did back then, and we're smarter players."

In 30 year of playing with the band, Ringenberg has learned a few lessons, in particular that not every performance will be great and not every song will be a great - and that it isn't something to let "drive you crazy." But looking back, he says it might have been nice to have a hit song.

"And I think back when we were really happening, in the mid-80s, we should have slowed down and savored it a bit more," Ringenberg said.
Posted by jtf at 3:28 PM

I have been visiting various blogs for Press Pass. I have found your blog to be quite useful. Keep updating your blog with valuable information... Regards