Mother With a Gun


She and her baby are alive, and their would-be killer is dead, because she was armed. 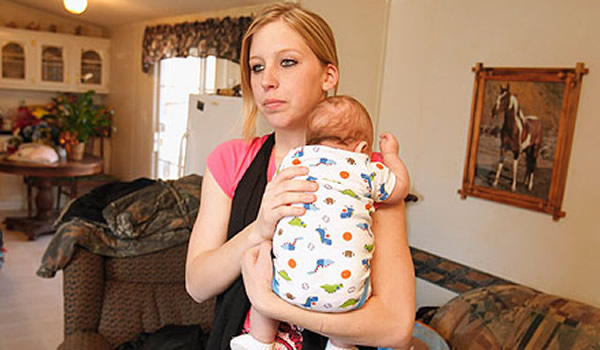 If the National Rifle Association had an award for Mother of the Year, it might already have a winner. When two men began to break into her home on New Year’s Eve, Sarah Dawn McKinley of Blanchard, Okla., popped a bottle into her crying three-month-old baby’s mouth and reached for her guns.

According to her account and that of police, she defended herself and her child in terrifying circumstances. To say McKinley was in the middle of nowhere would exaggerate the centrality of her location in a sparsely populated area about 25 miles outside of Oklahoma City. To say her home was vulnerable would exaggerate the security of a trailer with no alarm system or safe rooms. To say she was on her own would probably exaggerate her sense of connectedness, by herself, tending to her infant, after her husband had died of lung cancer on Christmas Day.

This is the stuff of nightmares. But McKinley never lost her cool. We know because, after shoving the couch in front of her door, she called 911 from her cell phone. The recording of the call should be put in a time capsule to capture the odd juxtaposition in 21st-century America of hardscrabble common sense on the one hand and a polite solicitousness toward the authorities on the other.

“I’m here by myself with my infant baby, can I please get a dispatcher out here immediately?” she asked. Note the instinctive civility of the “please.” The answer was basically “no.” With three deputies covering 12,000 square miles, no one could get to her soon. McKinley stayed on the line an incredible 21 minutes. Then, she got to the crux of the matter. “I’ve got two guns in my hand,” she told the operator. “Is it OK to shoot him if he comes in the door?”

This would seem a superfluous question if you believe your safety is at risk at the hands of someone forcibly entering your home. But not all states have the same “castle doctrine” as Oklahoma that gives homeowners an unambiguous right to shoot unlawful intruders. And not all jurisdictions are rational about firearms. Visiting New York City from Tennessee, where she has a gun permit, Meredith Graves brought a pistol in her purse to the 9/11 Memorial. When she saw a sign saying “No Guns Allowed,” she innocently asked guards where she could check her pistol. This query prompted her arrest on — yes — suspicion of carrying a loaded weapon. She could face jail time, in what promises to be the most pointless trial of the century.

Back in Oklahoma, the 911 operator was cagey, if unmistakable: “I can’t tell you that you can do that, but you do what you have to do to protect your baby.” That’s all the permission McKinley needed. The confrontation ended badly for Justin Martin, a 24-year-old who McKinley says had been harassing her. Police found him dead of a single gunshot wound, armed with a knife. His accomplice told police that they both were high on prescription painkillers and thought they could find medications used by McKinley’s late husband.

McKinley says she is sorry about Martin’s death, but would do it again. As Oliver Wendell Holmes Jr. wrote in a case nearly a century ago, “detached reflection cannot be demanded in the presence of an uplifted knife.”

Instances of self-defense are the anecdotes that gun controllers never want to hear. The NRA keeps a running list of them on its website: attempted armed robberies, home invasions, and other attacks rebuffed every month by the would-be victims. Surely, Sarah McKinley’s assailants thought the young, slender, widowed mother was an easy mark. Her shotgun meant they were wrong. Who would have it any other way? Otherwise, the intruder has the knife and she has nothing except a cellphone and the wan hope that someone armed with a gun makes it to her in time.

― Rich Lowry is the editor of National Review. He can be reached via e-mail: comments.lowry@nationalreview.com. © 2012 by King Features Syndicate
Posted by jtf at 9:55 AM