Save the blame game — it's just business 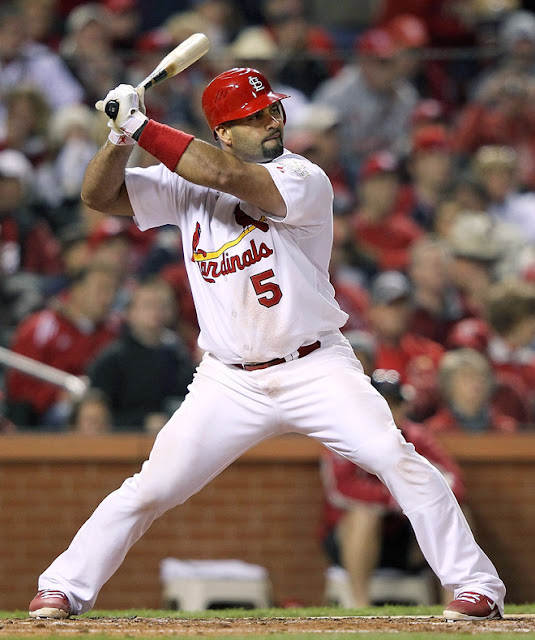 ST LOUIS, MO - FILE: FILE: Albert Pujols(notes) #5 of the St. Louis Cardinals bats during Game Seven of the MLB World Series against the Texas Rangers at Busch Stadium on October 28, 2011 in St Louis, Missouri. According to reports December 6, 2011, the Miami Marlins have made Pujols at 10-year contract offer. (Photo by Jamie Squire/Getty Images)

Albert Pujols is an Angel now, and it doesn't make him the devil. Sorry, but I don't have it in me to rage and rant against Pujols, the Angels or the Cardinals.

I'm sure others are working up a good sweat while delivering angry sermons that vilify Pujols for being disloyal, ridicule the Cardinals for being cheap or savage the Angels for overpaying an aging star.

Have at it. Pick your preferred villain and foam at the mouth. I can't join you. I've been temporarily overtaken by common sense.

I'm genuinely saddened by Pujols' departure because I wanted to believe that he'd be different, that he would stay, that he would fully appreciate what he had here. Cardinals fans and Pujols simply adored each other for the last 11 years.

I sincerely wanted to trust Pujols when he offered this testimony during a 2009 interview: "Do I want to be in St. Louis forever? Of course. People from other teams want to play in St. Louis, and they're jealous that we're in St. Louis because the fans are unbelievable. So why would you want to leave a place like St. Louis to go somewhere else and make $3 million or $4 more million a year? It's not about the money. I already got my money. It's about winning, and that's it."

In the end, Pujols went for the money.

Pujols got upset at the Cardinals for slow-playing the negotiations, for declining to give him Alex Rodriguez money, for refusing to make early offers that his agent could use as leverage in trying to lure other teams into the poker game.

We should have seen it coming, and not because Pujols is a bad guy. It's just the reality of the business. With most athletes, it's always about the money. And that's fine. We should have stopped taking this stuff personally a long time ago.

This was Pujols' opportunity of a lifetime, his one true golden shot at free agency. Pujols and his agent, Dan Lozano, didn't realize their ultimate goal of surpassing the A-Rod haul of 10 years and $275 million from the Yankees. But give them credit for coming close. The Angels made Pujols an offer he couldn't refuse.

Financially, Pujols is a winner. I think he's lost something special, the chance to retire as the second-greatest Cardinal of all time, just behind Stan Musial and slightly ahead of Bob Gibson. That's all gone now. And maybe that's the way it should be. Now that Pujols has gone to Cali, Musial will permanently own all of the important franchise records. Pujols can't touch them now.

Pujols willingly gave up his spot as one of history's inner circle Cardinals and will be viewed as just another athlete.

Angels fans will go crazy for Pujols, but he'll never be loved the way he was loved in St. Louis. When he gets old and breaks down, he'll never receive the level of empathy that would have come his way in St. Louis.

One day Pujols will realize this. (Not that it matters.) If the Angels wanted to give Pujols $254 million over 10 years, I can't blame Pujols for jumping. This is the second-richest player contract in MLB history, and he's earned that status as long as a team was willing to grant it.

Pujols can never be Musial, but he isn't LeBron James, either. Pujols gave this city, the franchise and the fans the best 11 years of his career. We were able to see Pujols in his peak form over 11 summers. He played a leading role in winning 40 postseason games, three NL pennants and two World Series. With Pujols as a Cardinal from 2001 through 2011, only the Yankees and Red Sox won more games than St. Louis.

It was an impressive, historical run. The Angels and their fans will witness the classic Pujols for a while, maybe get three to five years of the elite-level Pujols. But LA will also see the diminishing-returns phase of Pujols' career, and the Angels will pay the tab.

That's why I can't condemn the Cardinals for holding the line after going as far as they could. They stretched their budget beyond the set limits to offer Pujols a guaranteed 10-year contract worth $210 million.

I'll say it again: This franchise doesn't have to be ashamed of that offer. It wasn't the best, but it was generous. The Cardinals' offer was also insane.

Pujols will be 32 next month. His numbers are slipping. He has a partially torn ligament in his right (throwing) elbow. He limps on wheels that feel the strain of carrying an increasingly thicker body.

The decline phase is already under way. Unlike the Cardinals, the Angels have the luxury of easing Pujols into his downside years by using him as a designated hitter. But can he sustain his level of offensive production? For a while, yes. But it won't last.

Brian Kenny hosts "Clubhouse Confidential," an analysis-based show on the MLB Network. The program recently did a segment on Pujols' likely value over a long-term contract. And this was the conclusion, which is generally echoed by other sabermetric-minded evaluators:

"Albert Pujols is an all-time great, and we have him just below Lou Gehrig as the greatest first baseman of all time," Kenny said. "That's high praise. But if you study why big-money deals go bad, he fits the criteria of a deal that will be disappointing. A big slugger on the other side of 30 getting a long-term deal and his underlying components of production are trending down. You can say he'll be the exception, and maybe he will. But the evidence says something different."

The Angels are in better position to absorb the cost of paying Pujols for the inevitable downturn. The Angels already generate more cash than the Cardinals, have a higher payroll than St. Louis and are negotiating a new local TV contract that will lead to a huge spike in revenue.

The Angels are also poised to tap into a potentially lucrative demographic: the large Hispanic population in Southern California. At this stage, Pujols is a better investment for the Angels than he'd be for the Cardinals.

It made little sense for Cardinals Chairman Bill DeWitt Jr. to offer a 10-year contract to Pujols, but he did it anyway. If Pujols' true goal was to be a lifetime Cardinal, the franchise gave him that chance. He declined.

The Cardinals will be a lesser team for a while as they transition to life without Pujols. But they'll ultimately benefit from avoiding the repercussions created by the enormous bulk of Pujols' contract.

If that seems cynical, you shouldn't be shocked. As we learned again on Thursday morning, this is modern baseball. And it can be an awfully cold business.
Posted by jtf at 6:40 AM