A future looted to bribe the present 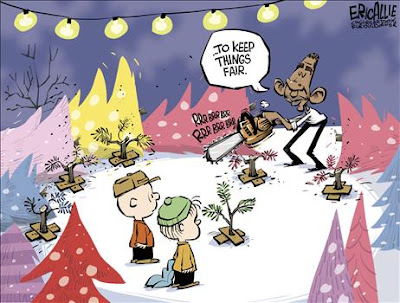 The President of the United States came to Osawatomie, Kansas, last week to deliver a speech of such fascinating awfulness that archeologists of the future, sifting through the rubble of our civilization, will surely doubt whether it could really have been delivered by the chief executive of the global superpower in the year 2011.

"This isn't about class warfare," declared President Obama. Really? As his fellow Democrat Dale Bumpers testified at the Clinton impeachment trial, "When you hear somebody say, 'This is not about sex,' it's about sex." The president understands that "Wall Street," "banks," "fat cats," etc., remain the most inviting target, and he figures that he can ride the twin steeds of Resentment and Envy to re-election and four more years of even bigger Big Government. His opponents, he told us, "want to return to the same practices that got us into this mess. ... And their philosophy is simple: We are better off when everybody is left to fend for themselves and play by their own rules. ... It doesn't work. It has never worked." He blamed our present fix on "this brand of 'you're on your own' economics."

This is a deliciously perverse analysis of the situation confronting America and a fin de civilisation West. In what area of life are Americans now "on their own"? By 2008, Fannie and Freddie had a piece of over half the mortgages in this country; the "subprime" mortgage was an invention of government. America's collective trillion dollars of college debt has been ramped up by government distortion of the student loan market. Likewise, health care, where Americans labor under the misapprehension that they have a "private" system rather than one whose inflationary pressures and byzantine bureaucracy are both driven largely by remorseless incremental government annexation. Americans are ever less "on their own" in housing, education, health, and most other areas of life – and the present moribund slough is the direct consequence.

It would be truer to say that the present situation reflects the total failure of "you're not on your own" economics – the delusion of statists that government can insulate millions of people from the vicissitudes of life. Europeans have assured their citizens of cradle-to-grave welfare since the end of the Second World War. This may or may not be an admirable notion, but, both economically and demographically, the bill has come due. Greece is being bailed out by Germany in order to save the eurozone but to do so requires the help of the IMF, which is principally funded by the United States. The entire Western world resembles the English parlor game "Pass the Parcel," in which a gift wrapped in multiple layers of gaudy paper is passed around until the music stops, and a lucky child removes the final wrapping from the shrunken gift to discover his small gift. Except that, in this case, underneath all the bulky layers, there is no there there: Broke nations are being bailed out by a broke transnational organization bankrolled by a broke superpower in order to save a broke currency. Good luck with that.

The political class looted the future to bribe the present, confident that tomorrow could be endlessly postponed. Hey, why not? "Tomorrow, and tomorrow, and tomorrow, creeps in this petty pace from day to day," says Macbeth. "To borrow, and to borrow, and to borrow," said the political class, like Macbeth with a heavy cold (to reprise a rare joke from Mrs. Thatcher). And they failed to anticipate that the petty pace would accelerate and overwhelm them. On Thursday, John Corzine, former U.S. senator, former governor of New Jersey, former Goldman Sachs golden boy and the man who embodies the malign nexus between Big Government and a financial services sector tap-dancing on derivatives of derivatives, came to Congress to try to explain how the now-bankrupt entity he ran, MF Global, had managed to misplace $1.2 billion. The man once tipped to be Obama's Treasury secretary and whom Vice President Joe Biden described as the fellow who's always "the smartest guy in the room," explained his affairs thus: "I simply do not know where the money is." Does that apply only to his private business or to his years in the Senate, too?

When Corzine took over the two-and-a-quarter-century-old firm, he moved it big-time into sovereign debt – because you can't lose with sovereign debt, right? Because a nation, even one that is, in any objective sense, bankrupt as Mediterranean Europe basically is, is not bankrupt in the sense that a homeowner or small business is: Corzine figured, reasonably enough, that no matter the balance sheets of Portugal, Spain, Italy and the rest, they'd somehow be propped up unto the end of time. As their credit ratings hit the express elevator to Sub-Basement Level Four, Corzine was taken down with them. The smart guy made a bet on government and lost. That's where the rest of us are headed: The "you're not on your own" societal model of Western Europe has run out of people to stick it to.

In Kansas, in his latest reincarnation, the president channeled Theodore Roosevelt in trust-busting mode. "He busted up monopolies," cooed Obama approvingly, "forcing those companies to compete for consumers with better services and better prices." But who wields monopoly power today? Washington dominates ever more areas of life, from government-backed mortgages to the government takeover of education loans to Obamacare's governmentalization of one-sixth of the U.S. economy. In my most recent book, which makes an attractive and thoughtful Christmas gift for the apocalyptically minded loved one in your family, I quote an old joke about the British equivalent of the U.S. anti-trust division: "Why is there only one Monopolies Commission?" This is a profound insight into the nature of statism: By definition, there can only be one government – which is why, when it's "monopolizing", it should do so only in very limited areas.

Yet, after hymning the virtues of "better services and better prices," the president went on to issue the latest brain-dead call for increased "investment" in education. America "invests" more per student than any other nation except Switzerland, and it has nothing to show for it other than a vast swamp of mediocrity presided over by a hideous educrat monopoly. Might this fetid maw not benefit from exposure to "better services and better prices"? Perish the thought! Instead, Obama is demanding increased "investment" in "education" in order to "give people the chance to get new skills and training at community colleges so they can learn how to make wind turbines and semiconductors."

I am not a trained economist, but it is not obvious to me that the United States of America is crying out for more wind turbines, and, if it is, I'm sure many of those colleges' tenured Race and Social Justice Studies professors could be redeployed to serve as such. In Europe, the political class is beginning to understand that the social democratic state created to guarantee permanent stability risks plunging the Continent into the worst instability since those happy-go-lucky days of the 1930s. By contrast, in Kansas, the president of the United States is still riding the tie-dyed wind turbine and promising to waft you to Oz. These are dangerous times – and, as many will discover, whatever assurances the statists give, in the end you'll be on your own.