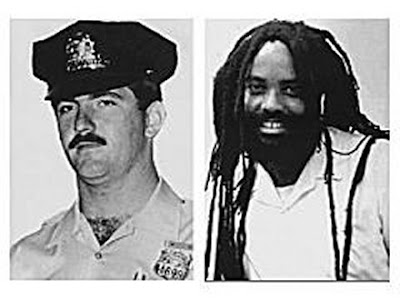 Mumia Abu-Jamal​ shot Philadelphia policeman Daniel Faulkner​ in the back and then shot the wounded cop in the face thirty years ago today. As an anniversary present, the former Black Panther learned this week that prosecutors will not seek to reinstate the death penalty imposed by a jury selected by the defendant.

Abu-Jamal wasn’t just guilty. He was late. It’s not that radicals had tired of violence by his 1981 arrest. Weatherman remnants had helped murder two policemen and a security guard in a Nanuet, New York robbery of a Brink’s truck a few weeks earlier, and subsequently bombed numerous locations in and around Washington, DC. But the public, as stiff sentences suggested, had clearly tired of violent radicals. Huey Newton​ could murder an Oakland policeman in 1967 and find freedom a few years later. When a former Black Panther tried that in Philadelphia in 1981, a jury sentenced him to death. Despite evading that sentence, Abu-Jamal did not get away with murder. He has been incarcerated every day for the past three decades. The sixties had a bad eighties.

The times, but not the tactics, had changed. Mumia Abu-Jamal showed himself to be the identikit radical defendant.

He initially acted as own lawyer. He refused to enter a plea, refused to rise at the outset of courtroom proceedings, and demanded, more than one-hundred times, the presence of incarcerated Philadelphia cult leader John Africa​, whom the defendant described as the best lawyer in the world. He called one judge a “bastard” and another a “black-robed conspirator.” Unsurprisingly, he found himself kicked out of courtrooms at least a half-dozen times during the duration of his trial. Following the determination of his guilt, he melodramatically proclaimed: “This decision today proves neither my guilt nor my innocence. It proves merely that the system is finished. Babylon is falling! Long live MOVE! Long live John Africa!” The jury sentenced him to death, anyhow. Welcome to 1982.

From that first trial, Mumia attracted a “cult” following, as in small but passionate. They protested outside the courthouse and partook in a fracas within it. The “cult” following took on different connotations, as in mindless, when the death-row inmate became a delayed cause célèbre upon hiring a media-savvy defense team led by the late Leonard Weinglass​ in the mid-1990s. The Mumiacs insisted the police had faked the death of one witness to prevent her from recanting and that a .44 caliber round, inconsistent with Abu-Jamal’s .38 caliber revolver, had really caused Faulkner’s death—despite the appellant’s own ballistics expert rebutting this conspiracy theory on the witness stand.

A mythology engulfed Abu-Jamal that projected a persona not resembling the person. The back-cover copy of his Live from Death Row​ bestowed upon him a Peabody Award that he had never won. A common yarn spun by his admirers holds that police framed Abu-Jamal because of his explosive journalism. But he worked as a cab driver when he was arrested, and his stringer work on the A.M. dial had all but dried up. If the government had really conspired to silence a man who had been fired from a series of radio reporting jobs, they might have left him alone in his taxi. Charging the down-and-out driver with murder provided a megaphone, not a muzzle.

The inmate’s leftist politics overrode the evidence. Numerous eyewitnesses identified Mumia as the killer. He was found at the scene with a return round from Faulkner’s service weapon in his chest and a gun registered in his name by his side. The five spent shell casings in his gun were of the same unique variant as the “Plus P” bullets that killed the officer. Witnesses reported a hospital boast: “I shot the mother—er and I hope the mother—er dies.” In 1999, prison outreach activist Phillip Bloch recounted a 1991 conversation in which Abu-Jamal had acknowledged killing Faulkner. On the other hand, the commentator/killer compared George W. Bush to Hitler and eulogized Howard Zinn​ as a “brilliant” “master historian.” This surely made him innocent, or at least entitled him to a “get out of jail free” card. Right?

Abu-Jamal’s fortunes improved in the 1990s. Pacifica Radio aired Abu-Jamal’s commentaries after National Public Radio rethought an earlier decision to do so. Evergreen State College and Antioch College, among others, hosted the convicted murderer as a commencement speaker via audiotape. A Law & Order episode namedropped Abu-Jamal, with a character noting that the “Philadelphia journalist” was “framed for murder.” Rage Against the Machine played an infamous benefit concert for him. The subject of numerous cable documentaries, and the author of books, spoken-word CDs, and a periodic Internet column, Mumia became a cottage, nay, a prison-cell industry.

Never outside of the ranks of hit men had murder been so beneficial to one’s career. But then a federal judge had to ruin it by vacating Abu-Jamal’s death sentence in 2001. Although the rallying cry had been “Free Mumia​,” the urgency of his followers stemmed from the threat that the state would “Fry Mumia.” But Pennsylvania, which employed lethal injection anyhow, had executed just three people in the last thirty-five years. Wednesday’s announcement by Philadelphia District Attorney Seth Williams that he would forgo pursuing a reinstatement of the death sentence merely affirmed what all but the blindly passionate on both sides had already foreseen: Pennsylvania would never execute its most famous inmate.

A murderer facing life behind bars makes for a less compelling cause célèbre than one facing capital punishment. The throngs that had once shouted “Free Mumia” in Paris, Philadelphia, and San Francisco have long since reoriented their shouts toward other injustices.

The Mumiacs have moved on. Mumia remains in the same place.

- Daniel J. Flynn is the author of numerous books, including "Blue Collar Intellectuals: When the Enlightened and the Everyman Elevated America," forthcoming from ISI Books this fall. He writes a Monday column for HumanEvents.com and blogs at www.flynnfiles.com.
Posted by jtf at 11:19 AM